Western Digital, one of the biggest names in the data storage industry, got dragged into a rather complicated controversy regarding hard disk technology and marketing. That drama also dragged others like Seagate and Toshiba, though all three companies have, by now, made their official statements and clarifications. WD, however, is still working to clarify its position and its product line and it is doing so by introducing a third category in its Red family of NAS drives.

At the heart of the controversy is WD’s use of shingled magnetic recording or SMR for one set of its Red drives for NAS (Network-Attached Storage) products. While SMR tech is utilized to greatly extend the capacity of a hard drive, it is not ideal and may even be dangerous for use in situations that have heavy read/write operations or hours maybe even days of continuous uptimes.

Western Digital argues that not all NAS products are used for those situations. Small offices and home Offices, a.k.a. SOHOs, often used NAS storage for file sharing or backup and have lots of idle times, especially at night. For these, WD’s device-managed SMR (DMSMR) Red is sufficient, it explains.

Of course, some NAS users do have heavy workloads and 24/7 use, particularly small and medium-sized businesses or SMBs. The company’s Red Pro line, all of which use conventional magnetic recording (CMR) remains its recommended solution for these cases. New, however, is the WD Red Plus line for SOHOs that have more intensive workloads but have fewer performance demands than SMBs. These Red Plus NAS drives all use CMR as well. 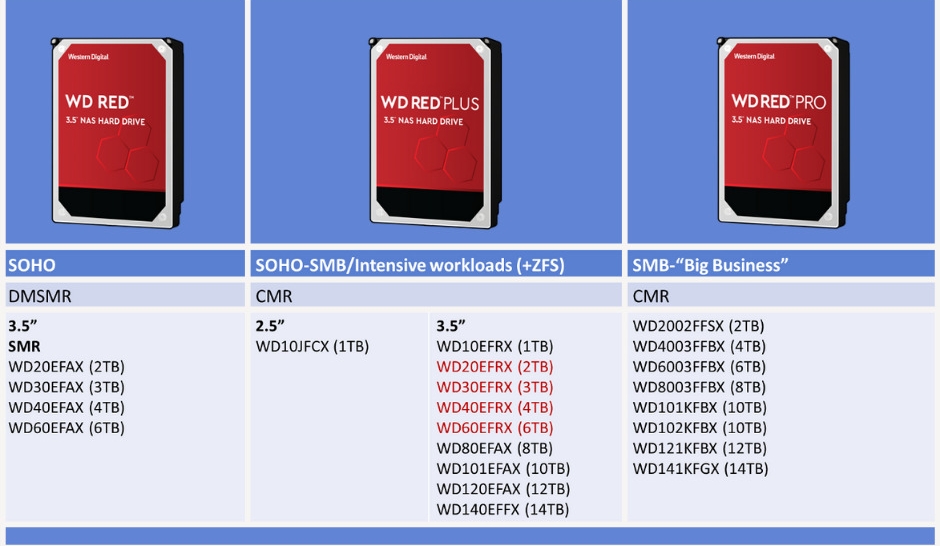 The Western Digital Red Plus NAS drives cover a range of capacities from 1 TB to 14 TB. However, the 2, 3, 4, and 6TB drives are not yet available. Actually, there is no word yet on when the new Plus drives will be ready for purchase or for how much.