Over the last several years, there has been a significant push in the automotive industry to prevent distractions that force drivers to look away from the road to operate their vehicle’s systems. This drive has ushered in a number of features in modern cars, such as voice control systems for infotainment and other car functions. Increasingly common are head-up displays, that project information like speed and other data in an area of the windshield that the driver can see, without taking their eyes off what’s directly ahead.

Volvo Cars has a long history of debuting new safety technology for vehicles that often trickles down to other automakers over time. The company has announced that it has invested in an optical imaging startup company called Spectralics. Volvo says the company is working on a “promising technology” that the company admits is at an early stage of development. However, the new technology could make vehicles much safer and help to improve the in-car experience for drivers.

Spectralics is working on a thin optics film that can be applied to see-through surfaces of all shapes and sizes, such as windshields and windows in of a car. The film is a multi-layer thin combiner (MLTC) that allows imagery overlay on windows or the windshield. Essentially, it turns the entire windshield surface into a transparent head-up display with significantly more capability than any HUD available in vehicles today.

As Spectralics explains it, when its MLTC is used on a car’s windshield, it creates an extra-wide field of view for the digital overlay, in the process providing drivers a sense of distance with virtual objects superimposed on the real-world environment. The technology could include advanced filters for in-cabin sensing, blind-proof front-looking cameras, and digital holographic projections. Volvo only offered a single image with the announcement that it invested in Spectralics, though it’s enough to get us excited about what could potentially come to future models should the investment pay off. 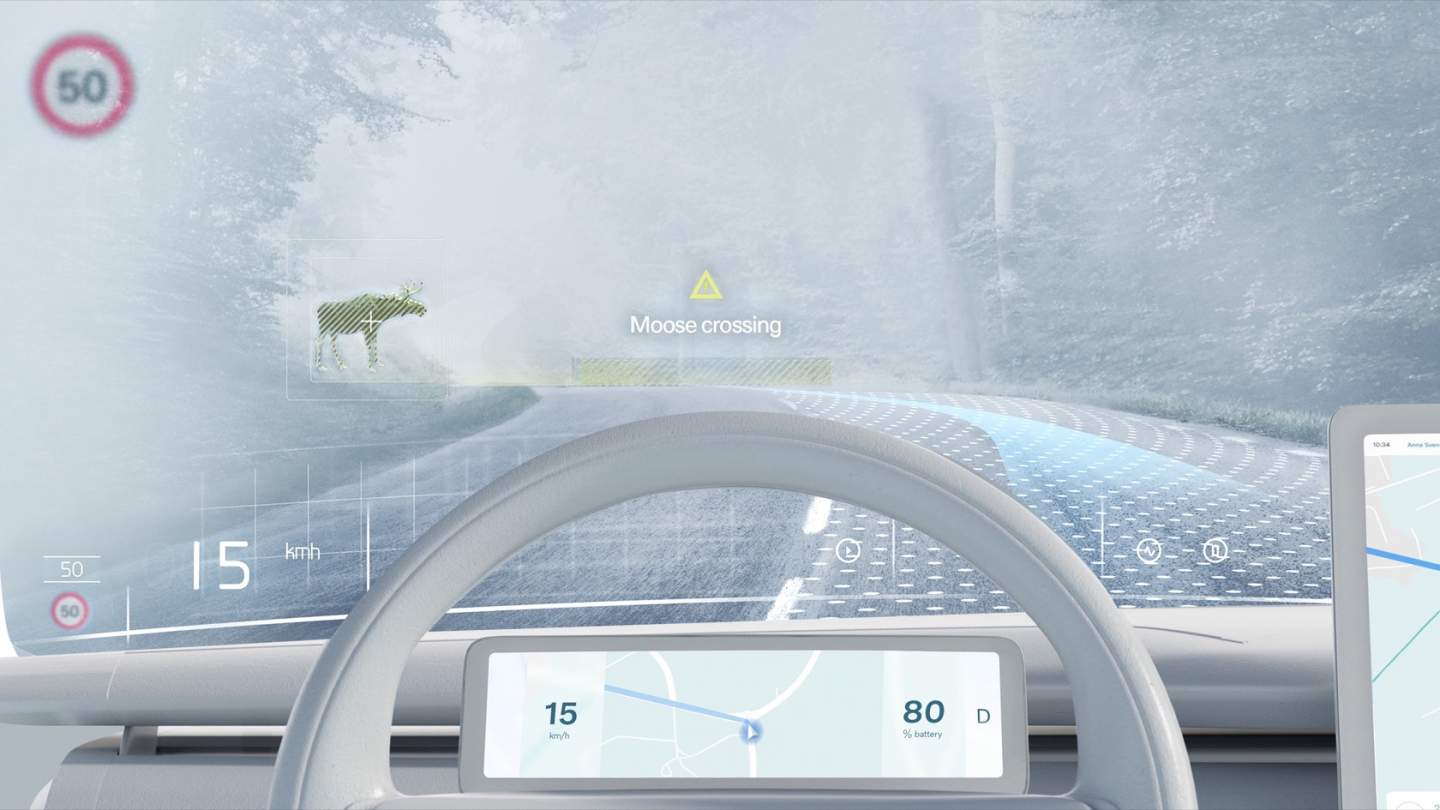 It shows a windshield able to highlight road markings, signs, and any potential obstacles in the road. The overlay, for example, highlights a moose potentially in the path of the vehicle on the left-hand side, and shows speed and other vehicle data along the bottom of the windshield. The promise of blind-proof cameras seemingly indicates the film would be able to take information from cameras able to see in the dark or fog, and overlay their imagery on the windshield.

It’s easy to understand how this capability could benefit drivers, particularly in extremely dark areas or in dense fog. Driving in fog is one of the most hazardous conditions drivers face as visibility can be limited severely. Another big benefit of providing imagery from cameras would be in whiteout situations during intense snowstorms. For those who have never driven in extremely heavy snow, it’s often impossible to see very far in front of the vehicle. Stopping could mean being stranded in the mountains without assistance, not to mention potentially being rear-ended by other drivers on the road.

Volvo’s investment was made to the Volvo Cars Tech Fund. The Head of the fund, Lee Ma, said the investment results from the company’s successful collaboration with MobilityXlab and DRIVE; Ma says that the fund believes Spectralics’ technology could set the standard for next-generation displays and cameras. As interesting as the technology is, some significant questions are unanswered at this time.

One of the biggest is how expensive the technology will be, and how easily – if at all – it can be transferred to another windshield during a replacement. That’s a burning question for those who live in cold-weather states, where roads tend to deteriorate rapidly. Anyone living in a cold-weather state like Colorado, for instance, knows that the thawing and freezing action of water seeping into cracks in the road tends to cause the roadway to break down in relatively short order.

Couple that freeze and thaw cycle with intense traffic, and lots of small pebbles and gravel are constantly being generated. They’re routinely thrown into the air at high speed by vehicles traveling over them, meaning an extremely high likelihood of a broken windshield. Frequently extreme differences in temperatures at night and during the day, meanwhile, also mean that what starts out as a small chip that could be easily repaired in the morning, can sometimes be a crack running across the entire windshield by the afternoon.

How much this type of technology would increase the price of the windshield will be a barrier to the technology. Many automotive insurers won’t write traditional glass breakage coverage in cold-weather states, because broken windshields are so common. USAA, for example, won’t write a no-deductible glass breakage plan as you can get in warmer states like Texas. Instead, it covers a broken windshield on your comprehensive coverage, meaning you have to pay that comprehensive deductible if you want the windshield replaced.

Having recently replaced the windshield on a 2020 Jeep Renegade, the replacement price for a non-factory windshield was around $300. It’s also worth noting that you can be ticketed in some states if you’re driving a vehicle with a crack that runs the driver’s field of view. What that would mean is if, instead of a few hundred dollars, the Spectralics technology pushes the cost of the windshield into the thousands, it could be quite a burden to replace a windshield in a vehicle equipped with technology.

Perhaps the film attaches to a windshield in a way that can be simply removed and applied to the new window, but that is unclear. Another potential workaround for the issue of cracked windshields featuring this type of technology would be to use stronger glass. The glass covering the LCD for smartphones is often Gorilla Glass from Corning, and indeed we’ve seen some vehicles made available from the factory with windshields made of Gorilla Glass that is far more robust than traditional windshield glass. Again, of course, the risk we run with utilizing stronger glass for the windshield is an additional cost. The Spectralics technology is exciting and could make vehicles safer, but we can’t help but wonder what impact it might have on the long-term price of the car.