That feature, of course, is 4G LTE connectivity. The folks at Protocol spotted Verizon’s upcoming smart display in FCC filings for the product. The user manual for the product is present in that FCC filing, and that’s where we discover the most about it thanks to a full list of specifications and a breakdown of the buttons and components of the smart display itself.

For instance, we learn that Verizon refers to this device only as the “Verizon Smart Display.” It has an 8-inch display that outputs at 1280 x 800 resolution, with 4GB of RAM, 16GB of eMMC onboard storage, and Bluetooth 5.0. It also supports 2.4GHz and 5Ghz 802.11ac WiFi, along with the aforementioned support for 4G LTE. With that LTE support, the Smart Display can be used when WiFi isn’t available, giving it a bit more versatility than smart displays that only offer WiFi connectivity. 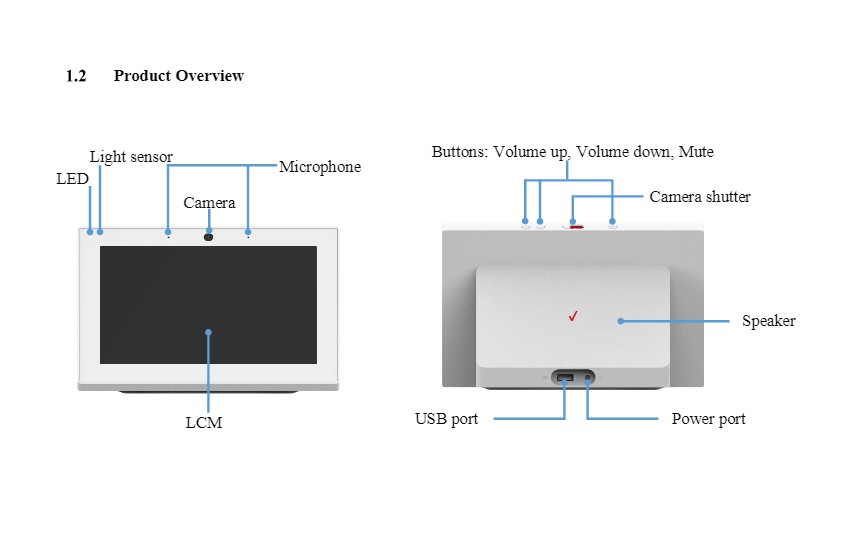 In a diagram of the Verizon Smart Display included in that same manual, we learn that the device uses dual microphones and has a front-facing camera that can be hidden behind a shutter when not in use. The speaker for the Verizon Smart Display is built into the stand behind the display itself, which also houses the power port and USB-C port. Volume buttons (which includes a mute button) and a slider for the camera’s shutter are positioned on the top of the device.

While the Verizon Smart Display will use Amazon’s Alexa, users will also be able to wake the device by saying, “Hi Verizon.” The FCC listing gives us no indication of when this device might launch, but generally, these products are nearly ready for release by the time they make a pass through the FCC. We’ll keep an eye open for an official announcement from Verizon, and we’ll let you know when that comes down the pipeline, so stay tuned for more.