It may seem hard to believe, but Verizon was the first carrier to launch 4G LTE just two and a half years ago. Now, the carrier has launched the faster data service in its 500th market in the US. This means that Verizon’s LTE now covers 99% of the carrier’s 3G footprint, which is approximately just a couple million shy of 300 million people.

Verizon says it covers 49 states with its LTE, but come next month, the carrier’s LTE service will be available in all 50 US states as Verizon prepares to launch LTE in Alaska, which is a state that didn’t even have 3G to begin with. It’s not said what city in Alaska will be given the lucky charm, but it’ll most likely be in one of the state’s bigger cities like Anchorage, Fairbanks, or Juneau.

While other carriers have their own LTE networks as well, none come close to the size and coverage of Verizon’s LTE footprint. AT&T has been found to have the fastest LTE in the US, but many people prefer coverage over top speeds, including yours truly. T-Mobile is the latest big carrier to join the LTE race, launching their service just a couple of months ago. 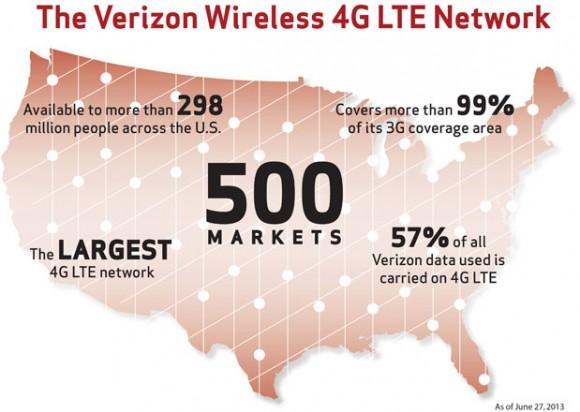 Verizon sure does enjoy boasting about their LTE network, though, even if they don’t have the fastest speeds. The carrier’s LTE covers 95% of the US population, so you’d be hard-pressed to find an area in the US that didn’t have Verizon’s LTE network. However, any rural area you go to probably won’t have LTE.

As for Verizon’s deployment of voice over LTE (VoLTE), this won’t happen until next year, which is a bit later than what the company previously said. However, when it does eventually launch, users can expect features like HD voice and video calling. Specifics haven’t be disclosed, but we should see it being rapidly deployed over the company’s current LTE network without much hesitation.