Just when you thought only Windows received the bulk of horrifying viruses and crapware, here comes WireLurker, a new family of malware, not even just a single one, that targets both Apple’s desktop and mobile platforms for maximum reach. Palo Alto Networks, the cybersecurity company that discovered and reported this situation calls this an “unprecedented” type of malware, at least as far as iOS and OS X are concerned, hinting at the developing, or rather worsening, situation when it comes to malware and hackers’ abilities to infiltrate our computers.

Of course, OS X and iOS have never been completely immune to malware, especially the recent bout of ransomware that have encrypted computers without authorization. But according to Palo Alto Network’s research, this new family could probably be one of the worst to hit Apple’s platforms because of four reasons. 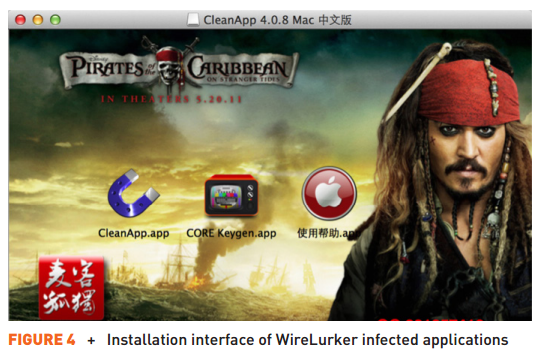 In a nutshell, it’s a type of malware that gives form to a computer user’s worst fears when it comes to viruses, trojans, and all other types of computer problems that one usually associates with Microsoft’s platform. Palo Alto Networks says that it represents a growing sophistication in malware development. Given the popularity of Apple’s platforms, especially iOS, it isn’t surprising that miscreants are stepping up their game in attacking the ubiquitous iPhones and iPads in the market today.

Now that we are aware of the dangers, what can users do? They say that prevention is better than cure and that applies here as well. Computing best practices, such as enabling security options on the App Store and refraining from installing random third-party apps from unverified sources, will go a long way in preventing infections. The researchers have also identified WireLurker’s Command and Control network traffic so as to more easily detect the malware. Keeping anti-malware software, which will hopefully update their databases to include WireLurker, up to date is also key and, of course, Palo Alto Networks recommends their own platform precisely for that job.