Toyota and Uber have announced that they are extending their collaboration agreement in the autonomous auto realm. The deal will see Toyota invest $500 million into Uber. Uber plans to integrate its self-driving tech alongside the Toyota Guardian technology in vehicles built specifically for the Uber ride-sharing network. Toyota and Uber want to bring autonomous ride-sharing to the masses at scale.

Toyota and Uber have agreed that the vehicles using the tech in the collaboration will be owned and operated by mutually agreed on third party autonomous fleet operators. Uber CEO Dara Khosrowshahi says that the goal of the collaboration is to deploy the “world’s safest” self-driving cars on the Uber network. 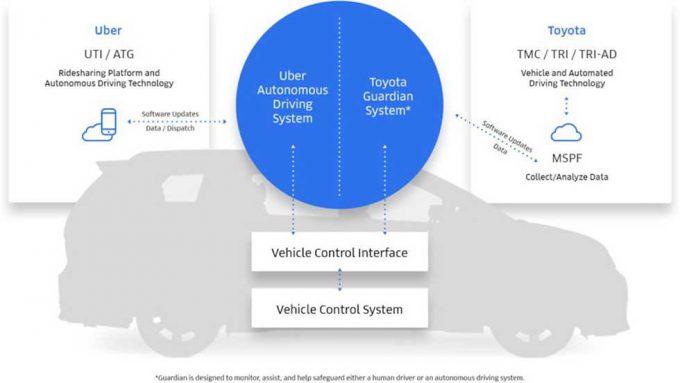 To begin the so-called “Autono-MaaS” (autonomous-mobility as a service) fleet will be based on the Toyota Sienna minivan. Uber’s tech and the Toyota Guardian automated safety support system will be integrated into the vehicles. Toyota will also integrate its Mobility Services Platform information infrastructure for connected vehicles into the rides.

Toyota says that the Mobility Services Platform, the core information infrastructure for connected vehicles, will kick off pilot-scale deployments starting on the Uber network in 2021. Uber plans to use Toyota’s Guardian system to independently monitor vehicle environment and situation in real-time.

That safety system monitors the automated driver and vehicle in real-time. The investment in Uber by Toyota and collaboration on autonomous vehicles are subject to regulatory approvals.