Twitter’s reply settings are now rolling out for everyone

Back in May, Twitter started testing a new feature that allowed users to define who could and could not reply to their tweets. These changes were made in attempt to help people feel more comfortable sharing their thoughts on their own Twitter profiles. After a few months of testing, those features are now rolling out to everyone on the platform.

Beginning today, you can choose to let everyone reply to your tweet – which is the default and most familiar option for Twitter users – but you can also restrict replies to people you follow or only people who are mentioned in the tweet itself.

Those who are restricted from replying still have options if they want to get in on the conversation. They can still view, like, share, and retweet those restricted tweets, though they also have the option of retweeting with a comment. “We’ve learned a lot from usage, feedback interviews, and surveys,” Twitter said in an announcement today. ‘These settings help some people feel safer and could lead to more meaningful conversations, while still allowing people to see different points of view.” 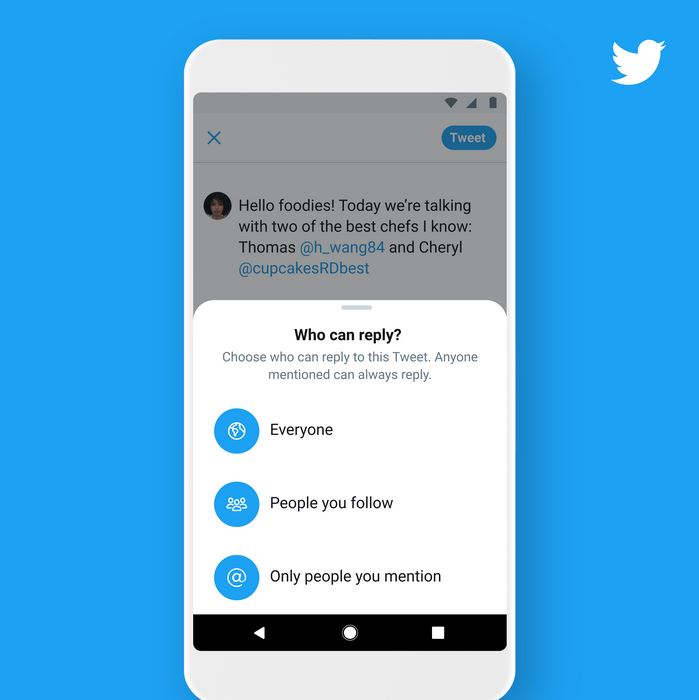 Sharing the results of those surveys, usage stats, and interviews, Twitter said that importantly, would-be “problematic repliers” aren’t finding other ways to publish those replies. “These settings prevented an average of three potentially abusive replies while only adding one potentially abusive Retweet with Comment,” Twitter said, noting that it hasn’t seen an uptick in abusive direct messages either.

The company thinks that this could ultimately lead to conversations that are “more meaningful,” as it could mean that users feel better about sharing their views on sensitive topics. These settings have also seen a dramatic rise in traffic to the Retweet with Comments timeline, which is “visited 4x more often on Tweets using these settings.”

So, from here on out, you’ll have a few more options when it comes to who can and can’t reply to your tweets. In the future, Twitter says that it will flesh out these reply options further, allowing users to invite others into the conversation after it’s started. We’ll keep an eye out for more on those additional features, so stay tuned.