Twitter’s approach to combating abuse on its platform has been multi-layered so far, and today even more security features are being added to the pile. This week, Twitter users will find that they have more control over what they mute and how long that content stays muted, while Twitter itself is doing a lot more behind the scenes to bolster its anti-abuse measures.

First, let’s talk about the changes that Twitter users have control over themselves. When this new update goes live, you’ll have more filtering options to choose from, which will now let you filter accounts based a number of different parameters. For instance, maybe you don’t want to see content from users that don’t have a profile picture, or ones that haven’t verified their email address, potentially cutting back on abuse you see from accounts that were created hastily with only the intent to troll.

Your muting options have also been expanded. They were already pretty well fleshed out after an update that arrived in November, but now you can mute accounts directly from your timeline. You can also mute accounts and content for a predetermined amount of time, whether that’s for one day, one month, or indefinitely. 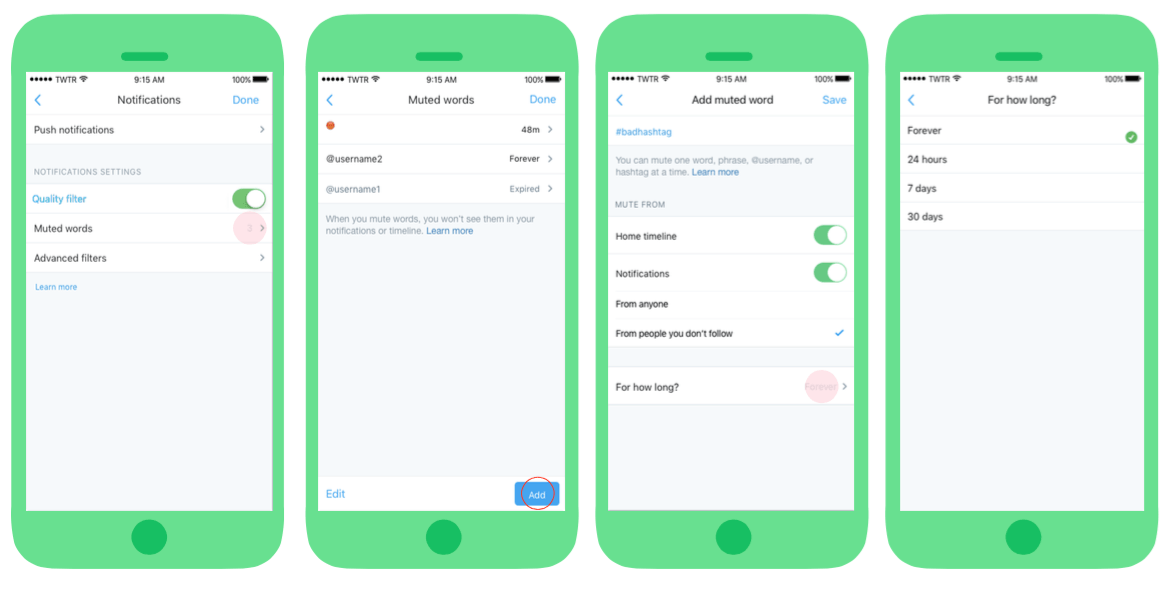 The other part of this update centers around work Twitter is doing on the back end. Twitter is implementing new algorithms that will help it identify abusive accounts without needing to rely on reports. When these algorithms identify the potential for abuse – such as repeated, unsolicited tweeting to other users – Twitter will implement certain restrictions on the offending account. For instance, Twitter may make that account’s tweets only visible to its followers for a set amount of time.

Twitter is quick to admit that while these algorithms are still in their infancy, mistakes will be made, but in general it won’t be taking action against an account until it’s confident that abuse is happening.

Of course, you can remove the need for algorithms entirely by reporting abusive content when you see it, and that report function is getting some new features today as well. Now, Twitter will follow-up with you when you report content or accounts, letting you know when it’s received your report and when it has taken action. While you probably shouldn’t expect Twitter to get too specific with its follow-ups, it’ll be nice to be kept in the loop nonetheless.

Slowly but surely, Twitter’s methods for combating abuse are becoming more comprehensive. Twitter doesn’t seem to be slowing down, either, so don’t expect this to be the last thing we hear on the matter. Have you been using Twitter’s new tools? Have you noticed a difference in the amount of abuse on the platform? Let us know in the comments section.