Twitter will label politician tweets that break its rules

Twitter has something of a tricky situation on its hands. Sometimes, public figures – specifically, people in government – say things on Twitter that violate the company’s rules, forcing Twitter to make a tough decision. Does it enforce its rules and remove the offending tweet, or does it leave the tweet published because it’s in the public interest to do so?

It’s not a question that has an easy answer, but now it seems that Twitter has decided on something of a compromise. As tweeted by CEO and co-founder Jack Dorsey, Twitter will now in some cases leave tweets that break its rules published, but it will do so by flagging them with an alert that informs other users that the tweet breaks Twitter’s rules on abusive behavior.

We‘ll now clearly label any tweets which violate our terms of service but decide to keep up due to public interest. https://t.co/0jxS7GrARy

Dorsey linked to a post on the Twitter blog which goes into more depth about this new alert and the thought process behind implementing it. The company explains that it’s important for users to be able to interact with their elected officials on platforms like Twitter, so even for tweets that violate the website’s rules, it still may be in the public’s interest to leave them accessible.

These new rules apply to only a limited number of accounts, it seems. Twitter says that the account must “be or represent a government official, be running for public office, or be considered for a government position.” That last bit applies to political appointees who may not need to be elected but still must go through a confirmation process. Accounts also must have more than 100,000 followers and be verified. It sounds like accounts that don’t meet those three conditions will have their tweets which break Twitter’s rules be removed. 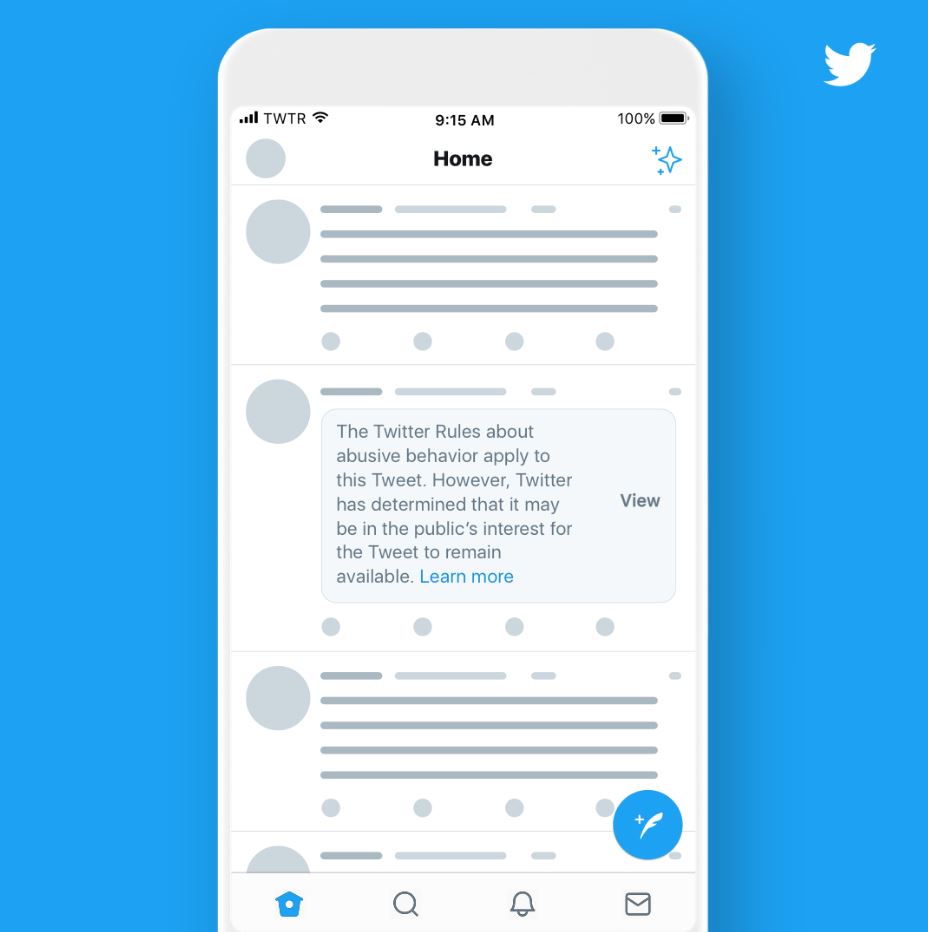 Twitter shared an image of what the alert will look like, saying that it will appear your home timeline and other areas like search. The company then ran down of list of considerations it’ll make when it comes to deciding when to actually use this notice. Check out all of the factors Twitter will consider below:

• The immediacy and severity of potential harm from the rule violation, with an emphasis on ensuring physical safety;
• Whether preserving a Tweet will allow others to hold the government official, candidate for public office, or appointee accountable for their statements;
• Whether there are other sources of information about this statement available for the public to stay informed;
• If removal would inadvertently hide context or prevent people from understanding an issue of public concern; and
• If the Tweet provides a unique context or perspective not available elsewhere that is necessary to a broader discussion.

If a tweet violates Twitter’s rules but doesn’t meet fulfill considerations listed above, Twitter says that it will require the account owner to remove the tweet instead of placing its notice on it. Furthermore, tweets that are flagged with this alert will be less prominent across the service, as they won’t appear in safe search, explore, the notifications tab, push notifications, or the “Top Tweets” timeline view.

Twitters goal, it seems, is to make sure it uses this notice sparingly. “The notice won’t be applied to any Tweets sent before today and, given the conditions outlined above, it’s unlikely you’ll encounter it often,” the company wrote. “We cannot predict the first time it will be used, but we wanted to give you more information about this new notice before you come across it on Twitter.”

So, in walking a fine line between enforcing its rules and making sure the words of government officials stay accessible through its platform, this seems like a pretty good solution. We’ll see how often Twitter’s notice is used soon enough, but given the current political climate, Twitter might be a little optimistic when it says users shouldn’t expect to see it frequently.