Some apps automatically dim at night, such as Google Maps. This feature is generally designed to make the usage experience at night more pleasant, such as looking at your phone in the dark without being blinded by bright white backgrounds, and now such a feature may be coming to the official Twitter mobile app. The feature has popped up in testing, and prompts users to select one of three Night Mode options.

Twitter’s Night Mode feature has begun appearing within the app for some users who have shared screenshots of the prompt. When it appears, users are asked to choose either ‘Off,’ ‘On,’ or ‘Automatic’ for the feature, the last of which will cause Night Mode to automatically turn on when the sun goes down and turn off when the sun comes back up. 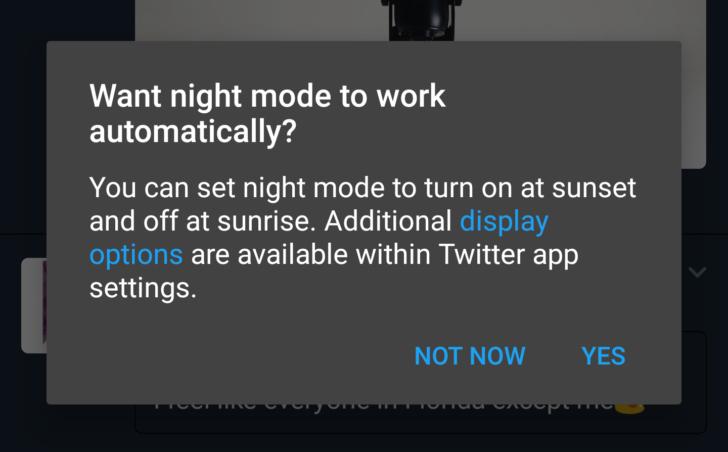 Once activated, the Twitter interface becomes dark, turning the text white and putting it on a black background. This means users will be able to more comfortably browse the app at night, eliminating the bright glow on one’s face while looking at the phone, though it’s doubtful how useful the feature will be given that most users will be in an illuminated room at night.

It should be noted that this is different than Twitter’s Dark Mode user interface, which first went live last summer. With that, users can toggle the app over into night mode and have it run non-stop until the user turns it back off. With the automatic mode, the app turns the feature on itself in the evening and then turns it off automatically in the morning.