Can’t think of anything original to tweet? If you ever feel tempted to pilfer someone’s clever quip or cheesy joke, be prepared to feel the sting of public shame. Twitter has started replacing those tweets with a boilerplate message letting others know the content was scrapped from elsewhere, and that the original content creator has issued a complaint. Take a look around Twitter and you might notice the message yourself — and you’ll also notice that many of the illicit tweeters are spam accounts, meaning this new banhammer might prove doubly useful.

News of the change was first surfaced by Plagiarism is Bad, a Twitter account, which grabbed the screenshot you see below. The blocking seems straight forward: someone tweets something, someone else steals it without credit, and the creator sends a complaint to Twitter. 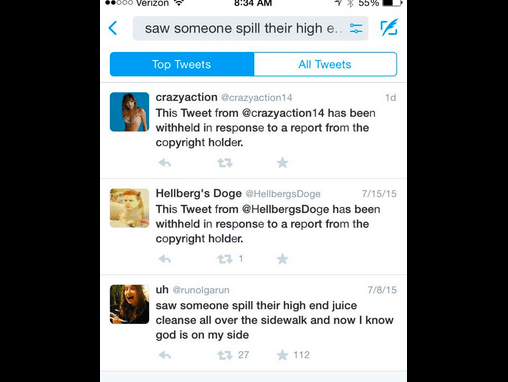 The source of the joke above, which earned several other accounts boilerplate blocks, reported that her joke had been used by others without permission and without credit. Twitter responded a short while after the complaint by blocking the tweets, and presenting them with a public message.

The boilerplate simply reads that the tweet was “withheld in response to a report from the copyright holder.” Hopefully such an action will help chip away at the glut of stolen tweets. Check out the timeline below for more Twitter news!