Spam accounts and abusive accounts are numerous on Twitter, and accounts with a high number of followers likely have a high number of these accounts blocked. To help others preemptively block these unwanted but not-yet-banned accounts, Twitter has made it possible for users to export and share their block list, allowing others to copy it and uniformly block those users, too. It makes the entire process faster, and is the latest in Twitter’s numerous efforts to decrease abusive activity on the service.

Because of the high number of abusive and spam accounts out there, blocking each one individually as it becomes a problem is a big hassle — long and tedious, and seemingly endless. By using someone else’s block list, though, users can piggyback on their efforts and block a whole bunch of accounts in a single moment. 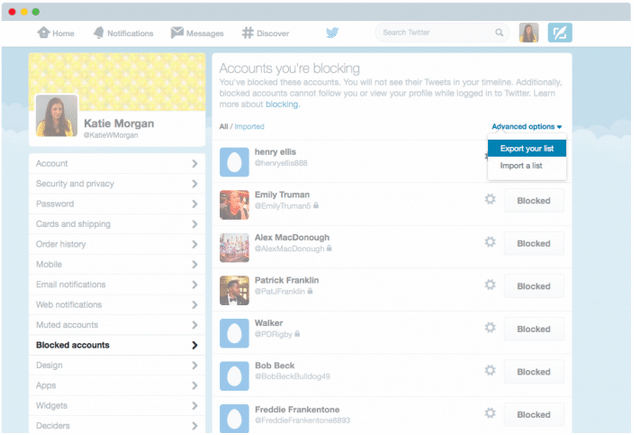 Twitter calls this an advanced blocking tool, saying it it hopes such an offering with improve users’ experience on the service. In order to export the list, one simply needs to head into the “Accounts you’re blocking” page and click on “Advanced options”. From there, select “Export your list” and confirm that you want to export it.

Each blocked account is listed individually next to a check box. Users can remove accounts they don’t want included in the export if necessary, then share that final exported list with others. Importing the shared list uses the exact same steps listed above, except users select “Import a list” rather than the export option.