Twitter has announced their quarterly earnings, and it’s a mixed bag. While they’ve got plenty of positive things to say, and the upside is huge, the social service once again lost money. For Q1 2015, Twitter reports they had a net loss of $162 million, but revenue of $436 million, up 74% year-over-year. A positive rise, but ultimately short of their $440-450 million estimate. Through non-GAAP EPS of $0.07 (analysts expected $0.04), Twitter stock dropped hard, and is currently down almost 20%.

Twitter blames coming up short on foreign exchange rates (earnings would have been up 80% versus last year, they say) and “lower-than-expected contribution from its newer direct response products” (read: our ad business isn’t as good as we thought).

To help get things back on track, Twitter has announced they’ve purchased TellApart, a targeted ad firm that will “significantly expand Twitter’s direct response capabilities for marketers”. The ads will also be sold via Google’s DoubleClick ad bidding portal, along with the rest of Twitter’s ad inventory. 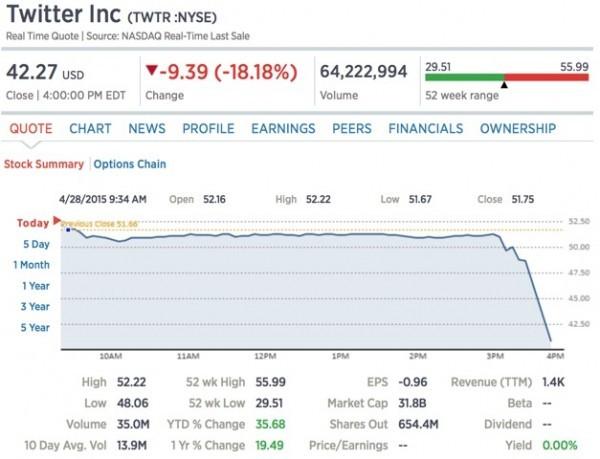 Advertising income was $388 million, up 72% versus last year. Twitter says about 89% of their ad income is via mobile.

Twitter’s userbase is also up — the company reports they now have 302 million average monthly active users (MAUs) through Q1 2015, up 18% year-over-year. Mobile represents about 80% of that number, according to Twitter.