Trash | Track, where does your junk go?

In 2009, MIT’s Sensable City Lab recruited 500 Seattle volunteers to tag their trash with cellular tracking devices. The project followed the tags through the entire waste disposal process. The results were compiled into a composite map showing the source and destination of each of the 3000 tagged objects. This paints a very specific picture of the way that waste travels from Seattle’s municipal area.

More and more effort is being spent looking at the supply side of our whole economic system. Where do the materials come from that turn into our various gadgets, devices, and objects of technolust? Companies compile, compute, and compare this data in such a way that leaves the consumer very much in the dark. MIT’s Senseable City Lab posed the question, what about the other side? What happens to the garbage when we throw it into a streetside can or into our home refuse receptacles? In hopes of finding a concrete answer, the Lab formed the Trash | Track team. Together, they designed this device, a cellular tracking tag that reports it’s position periodically via SMS. The team then went to Seattle and tagged around 3000 pieces of refuse with this little gadget. 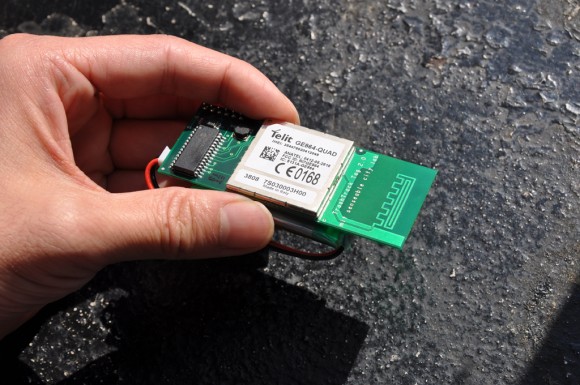 2011 is ramping up to be a big year for the Trash Track project. Their website reports that they just won the 2011 National Science Foundation international Science and Engineering Visualization Challenge for their visualization following the refuse to it’s final resting place. Associate Professor Carlo Ratti, director of the Sensable City lab said, “Trash disposal is one of today’s most pressing issues – both directly and as a reflection of society’s attitudes and behaviors. Our objective with this project is to reveal the disposal process of our everyday objects, as well as highlight potential inefficiencies in today’s recycling and sanitation systems.” This video was released last week as part of his presentation at TED.