Toyota has shown off a new hybrid concept of a smaller-sized Prius called the FT-CH, at the 2010 Detroit Auto show.  The FT-Ch concept is 22 inches shorter than the current production Prius, and quite possibly released at a lower price than the Prius.

The car was designed at Toyota’s European design center, a closer look shows LED headlights slung way back to the windshield, seats made of mesh, and the lack of a rear bumper.  Wheels look interesting, however, and the interior looks like something straight out of a vehicle from the Avatar movie.

Toyota said Monday it plans to launch eight new hybrid models over the next few years, and will begin introducing plug-in hybrids and battery-electric vehicles in 2012. It says it also will have hydrogen fuel-cell vehicles in 2015 in global markets. Recent testing of its hydrogen fuel cells, which create electricity using hydrogen, showed the cars could go 431 miles on a single fueling. 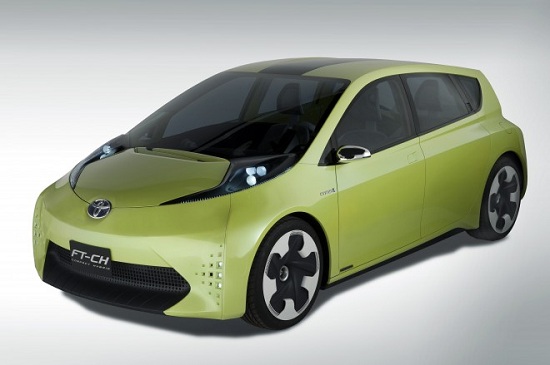