Toshiba dynaPad 2-in-1 puts Wacom back in the spotlight

When Microsoft switched to N-Trig for the Surface Pro 3 and again for the new Surface Pro 4, it necessarily had to push Wacom to the background. While the higher profile maker of graphics tools might not have been affected dramatically, it became less the talk of the town when it came to stylus-enabled Windows tablets. But with Toshiba‘s new dynaPad 2-in-1, Wacom is again front and center. Even Microsoft dubs it a digital notebook, putting emphasis on its writing and drawing talents, thanks to Wacom’s active digitizer.

“Digital notebook” is probably Microsoft’s respectful way of not calling the Toshiba dynaPad a Surface Pro clone. The 12-inch display, though only sporting a 1920×1280 resolution, has that same aspect ratio that is described to resemble the size and dimensions of a physical notebook. Pretty much the same way the Surface Pro 3 was described. Details on the hardware of this Windows 10 tablet are slim at the moment, but we can at least expect a new Intel Skylake CPU running the show.

Microsoft is instead putting more weight on the dynaPad’s creative uses, thanks to the Wacom Active Electrostatic TruPen technology that boasts of 2,048 levels of pressure. It is only recently that N-Trig could only muster half that number, though some artists would insist that there are times when the difference is negligible. The stylus makes the dynaPad great for scribbling and making art, whether using Toshiba’s own custom suite of apps or Microsoft’s. 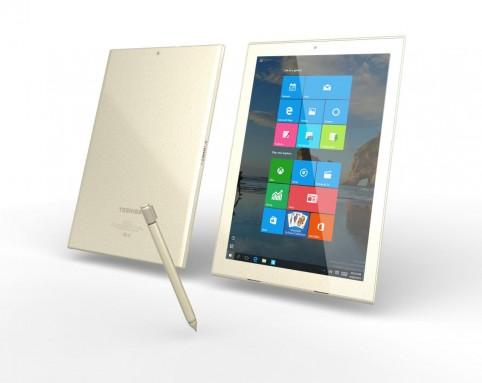 The dynaPad also docks with an ultra-thin keyboard, presumably sold together. By being ultra-thin, you can’t expect any additional ports or battery from the keyboard. Microsoft doesn’t mention whether the keyboard communicates with the tablet physically or wirelessly.

The Toshiba dynaPad is now up for pre-order in Japan, but it won’t be until the first quarter of 2016 that the tablet will available in the US and Europe.