This frog has mastered the headbutt of death

A researcher has come across a frog with an ultra-flexible neck, poisonous skin, and a spiky skull — all of which work together to facilitate a headbutt of death. Or, at the very least, a headbutt that results in hours of what is described as intense pain. The venomous frog was happened upon by researcher Carlos Jared, who didn’t at first realize the frog was dangerous to hold. According to Jared, he picked up one of the frogs and it began struggling and headbutting his hand. He described the sensation as at first being like rough sandpaper, and later on being intensely painful.

The frog is known as the Greening’s frog (also called the casque-headed tree frog) and this isn’t the first encounter with it. The frog was first discovered in 1896 by Boulenger, and was most notable due to its flat head, which it uses to block off burrows and holes in which it retreats. 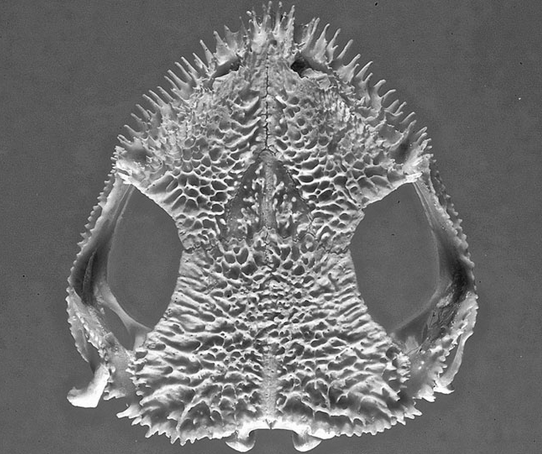 Also notable is the skull, which is made of a single plate of bone that has fused together, including with the lowest layers of the skin. Small bony spikes line the outer edge of the bone ridge, as well. The frog’s skin has a poisonous substance — and it is able to secrete an even worse white toxic mucus — which it “injects” into an attacker’s flesh by headbutting with its bony spikes.

This makes the frog both poisonous and venomous — it can passively poison an attacker by being bitten, and it can aggressively poison a predator by attacking first and “injecting” the venom. Testing has shown that the Greening’s frog’s toxin is twice as deadly as the venom from pit vipers.