China, like many other parts of the world, is focusing hard on getting drivers to leave behind their combustion-powered cars and moved to electric vehicles. Currently, one of the best-selling electric vehicles in China is the Wuling Hongguang MINIEV.it’s a very affordable electric vehicle that went on sale in China last summer. A convertible version of the EV has now been revealed and will be seen at the Shanghai Auto Show.

The vehicle is a result of a joint venture between SAIC-GM-Wuling that American automaker GM is a stakeholder in. The standard non-convertible version of the EV sales for the equivalent of $4300 in China. With such a low price tag, the vehicle has been extremely popular, with reports indicating that Wuling has sold 15,000 units and has orders on the books for 50,000 more.

The new vehicle is called the Wuling Hongguang MINIEV Cabrio concept and does have some visual changes compared to the four-seat hardtop it’s based on. Changes include front and rear lights replaced by LED units and the use of negative space in the front bumper. The droptop also has some contrasting color trim and larger wheels.

The vehicle’s interior has a display screen showing instruments about twice the coupe model’s width. The convertible version does ditch the rear seat, making it a two-seat vehicle. Battery options include a 9.3 kWh unit offering 75 miles of driving distance or a 13.9 kWh good for 106 miles of driving per charge. 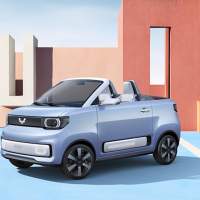 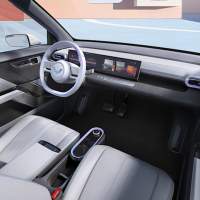 The vehicle reportedly has a top speed of 62 mph, which doesn’t sound like much by American standards but would be plenty for cruising the crowded streets of Chinese cities. The vehicle is listed as a concept, but word is it will enter production.