The first big update for Tom Clancy’s: The Division has dropped, and with it comes one huge change. Sure, there are plenty of changes, but I want to focus for a minute on just one of them. Loot. Specifically, you can now trade loot with your friends, but it’s not quite that simple.

One of the most difficult things to nail down in any online multiplayer game is balance. Whether we’re talking about a team-based shooter, a fantasy MMO, or a fighter, every multiplayer game must have balance. In The Division, you do have some different skills and perks that you can pick that create a more customized character, but what truly sets you apart from everyone else is your gear.

Crafting in The Division is about to get a lot harder

Last week it was announced that Ubisoft was going to be changing the crafting system around just a bit. The system remains the same, for the most part, but as of the recent update, it’s a lot harder to get the necessary components for crafting high-end items. Before the update, you could craft a high-end Gold item using 200 Green components. Now, it requires 1500 Green components to craft a single Gold item. And now breaking down Green and Gold items yield half of the components that they used to.

With the new changes, crafting is hardly the option for picking up new gear. Sure, you can keep breaking down the loot you pick up, and you’ll eventually be able to craft some items here and there, but now you’re going to have to depend on loot as your primary method of upgrading.

Prior to the patch, there was no trading in the game, whatsoever. If you picked up a sweet sniper rifle, and your friend is the team sniper, you couldn’t hand it off to them. Your only choices were to use it, sell it, or break it down for materials. It was frustrating, to say the least. Especially when you’d pick up two blues of the same item type, and not be able to help your friend out.

Thankfully in the recent update, trading was enabled. There are some catches to the new system though, ones that may frustrate some players. If you’re playing with a group and something drops, it can be traded with the other people you were grouped up with. You’ll have one hour to decide to trade it. After that, the item will be permanently tied to your character, just the way it used to be. You’ll be able to break it down, sell it, or use it, but you won’t be able to hand it off. 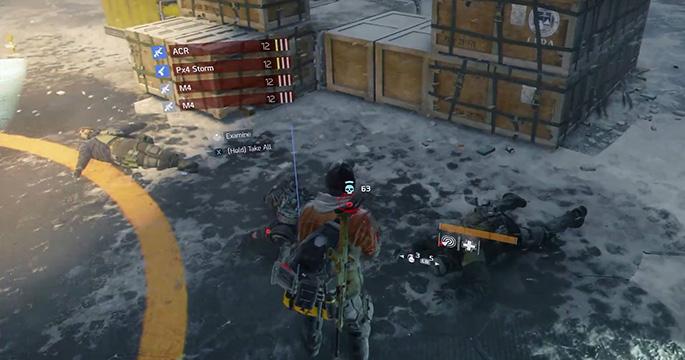 This may frustrate people who play with friends, but not all of the time. If you find that perfect gun that would suit your best friend, and you were just playing solo for a bit, you’re stuck with it. I love being able to hold onto gear for my friends, so that they’re better outfitted when we play games together. But I understand the reason why Ubisoft made the decision that they did.

The limitations of this trading system fall back to balance. Without restrictions on how and when you can trade items, the game could lose a lot of its fun. It would be far easier for everyone to find the exact gear they want/need, if they can get it from any other player. This could also potentially lead to a market where people could offer to sell items to other players for real world money. And we all know how much fun Diablo III was, when there was a real-money auction house.

In addition to keeping things balanced, the trading rules encourage you to group up with friends and strangers alike. The more people you play with, the greater your chances of someone finding that perfect piece of gear, and trading it off to you.

I’m in favor of the loot system that Ubisoft has decided to use. It may not be perfect, but I think it’s a good compromise for the sake of better gameplay and balance.