The Best Games of 2018: Tetris Effect

Tetris, like Mario, is one of those perennial games that will probably never go away. The core gameplay of Tetris is solid enough that it can stand on its own some 35 years after it first debuted, but that hasn’t stopped countless developers from trying to put their own unique spin on the puzzle game. Some of these attempts have been more well-received than others, but perhaps the most successful is Tetris Effect, which arrived earlier this year on PlayStation 4.

The game’s title, for those not in the know, is a reference to the phenomenon of the same name. The Tetris Effect, as Wikipedia explains it, occurs when someone spends so much time with an activity that thoughts of it begin to bleed into everyday life. With Tetris specifically, perhaps people see falling tetrominoes when they close their eyes, or start imagining how real-world items would fit together on a Tetris board when they’re out and about.

We’ve all likely experienced the Tetris Effect with some kind of video game before. For instance, I can remember paying special attention to the flowers and plants in the real world after spending a long time playing The Elder Scrolls IV: Oblivion. For as much as I’ve played Tetris throughout the years, however, I never experienced the Tetris Effect as a side effect of playing Tetris itself.

I don’t know if what I’m experiencing with this game is actually the Tetris Effect, but regardless, I sure have spent a lot of time thinking about it since I started playing it.

The interesting thing about Tetris Effect is that it so dramatically changes Tetris without touching the core formula much. The goal is still to clear lines of tetrominoes and avoid filling the playing field up to the top. The more lines you clear at once, the more points you earn. You’re therefore rewarded for thinking ahead and arranging your tetrominoes in a way that you can clear multiple lines with a single block. 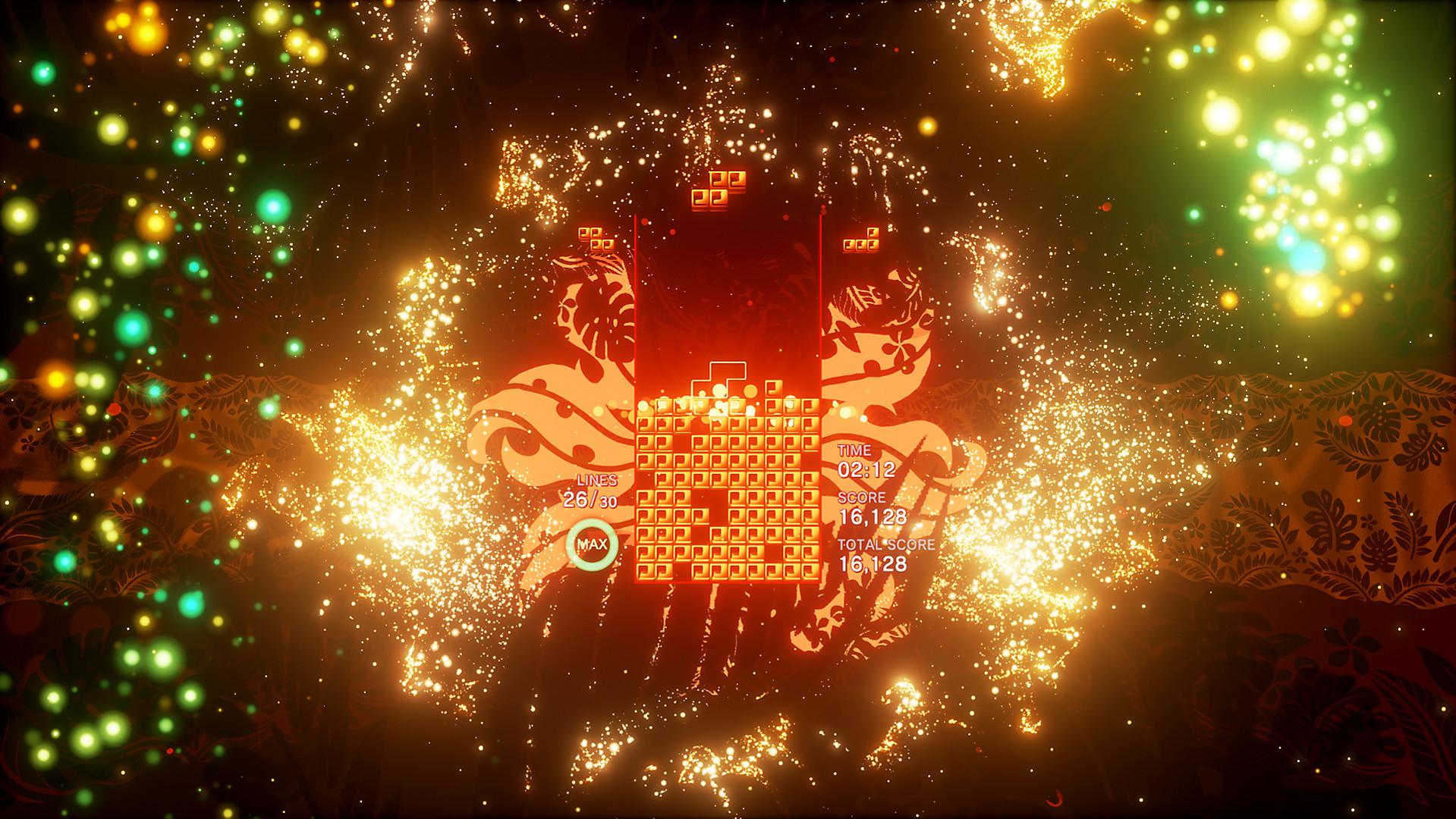 Tetris is perhaps one of the best examples we have of an “easy to learn, difficult to master” game. Much like Chess, the rules of Tetris are easy enough to learn, and pretty much anyone can start having fun with the game right away. To become truly good at Tetris, though, it takes a significant amount of practice. The professional Tetris players of the world show us that this game can be played at a very high level that few of us will ever reach.

Nothing about that changes in Tetris Effect. You do have the ability to stash a block and use it later, and there’s also a new “Zone” mechanic in Journey mode that has you charging a meter by clearing lines. You can activate Zone to freeze the action on the playing field and try to rack up as many cleared lines as possible before your energy runs out. 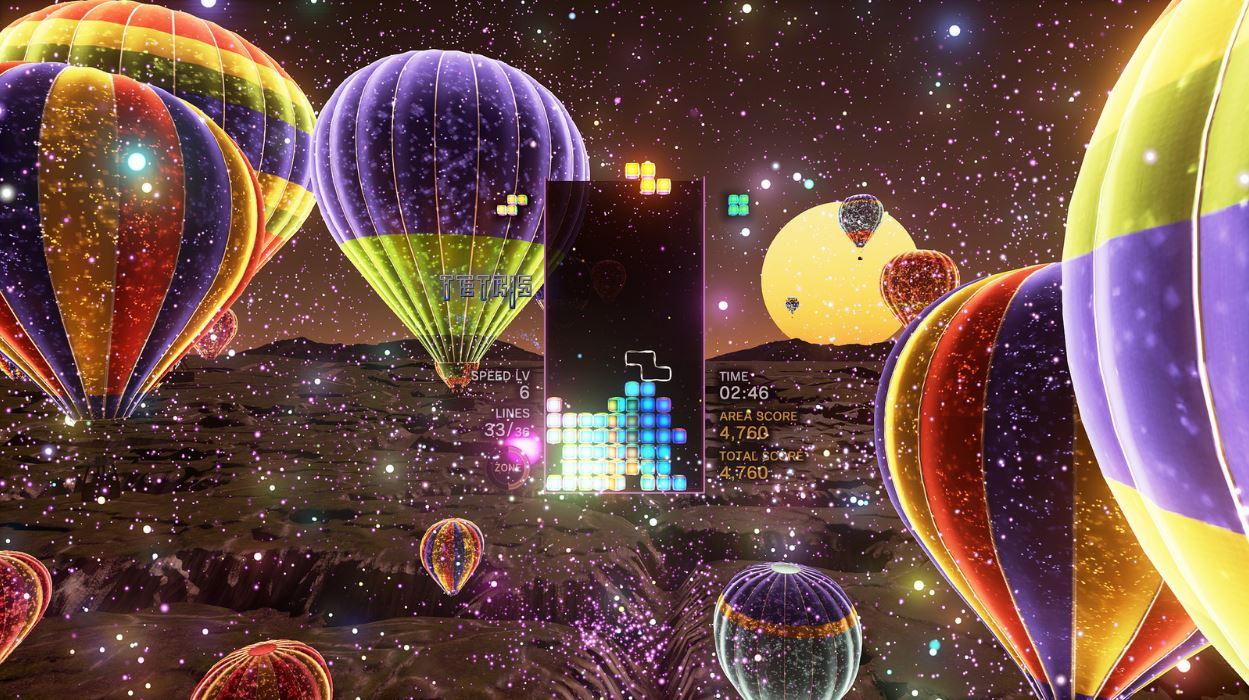 There are also a number of different modes that come with their own special rulesets and challenges, but as far as the game’s main Journey mode is concerned, the ability to swap blocks and Zone are the only new mechanics, and they don’t change the core gameplay that much.

No, the biggest new addition happens outside of the playing field. Tetris Effect is a game that is tied intricately to music and impressive background visuals. In many cases, the music starts nearly inaudible and the background empty. As you play though, the music begins to build and the visuals grow in intensity, culminating in a fantastic feast for the senses. Once you meet a stage’s line goal, you go right into the next stage and start all over again, with a new song and a new theme to the graphics. 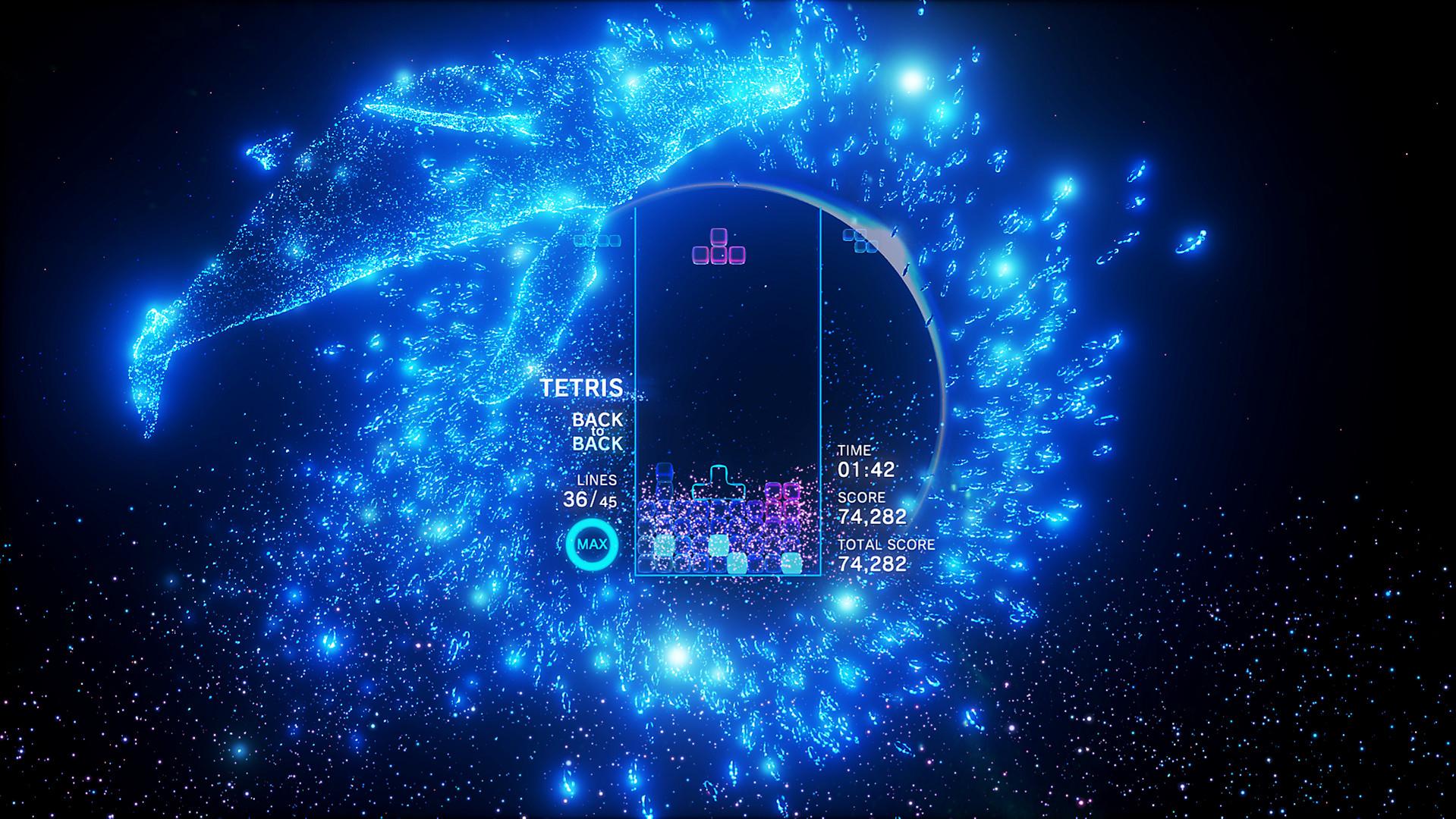 It sounds corny to say that Tetris Effect is a “feast for the senses,” but that’s the best way I can describe it. Tetris Effect is a game that’s very easy to get lost in, not only because of the focus required to actually line up your tetrominoes so you can clear lines and complete a stage, but also because of the immersive visuals and great soundtrack. Your tetrominoes even add to the music as you rotate them and drop them into place, which only makes the experience better.

At times throughout Journey mode, the gameplay, music, and graphics all combine to create a very relaxing game, but at the drop of a hat, that can transform into an intense race against gravity as you try to keep up with the speed at which tetrominoes are falling. Even my best descriptions couldn’t do this game justice, because it’s simply something that needs to be experienced. 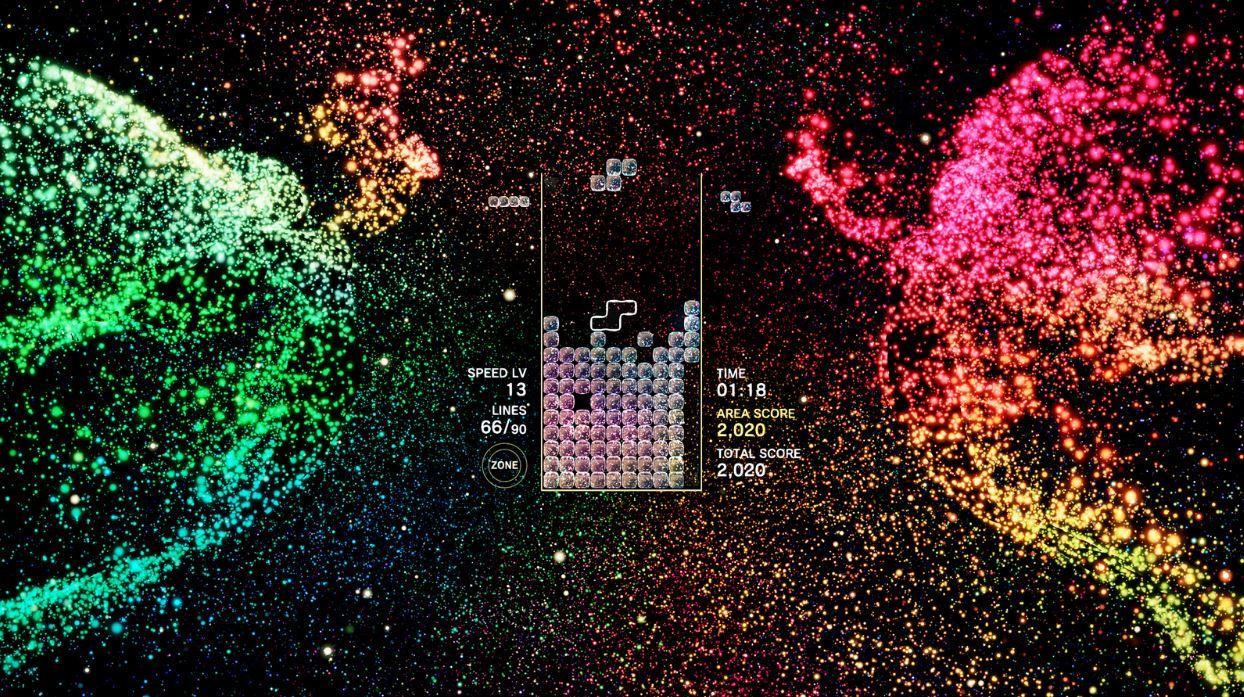 For that reason, it’s a shame that the game is exclusive to PlayStation 4. Tetris Effect is a game that should be as widely available as possible because it’s so good, but with that in mind, it’s easy to see why Sony wanted to lock it down to its platform. Still, here’s hoping that Sony’s exclusivity period is one that has an end, because it would be great to have this game on something like a Switch.

Tetris Effect is also compatible with PSVR, which I haven’t had the chance to try yet. It isn’t hard to imagine that the game gets even more immersive within the confines of a VR headset though, and I’m almost tempted to go out and buy a PSVR just to see how Tetris Effect plays with it. If you’re in the same boat as me and you don’t have a PSVR headset, I can confidently say that the game is still very immersive and entertaining on a regular old TV. 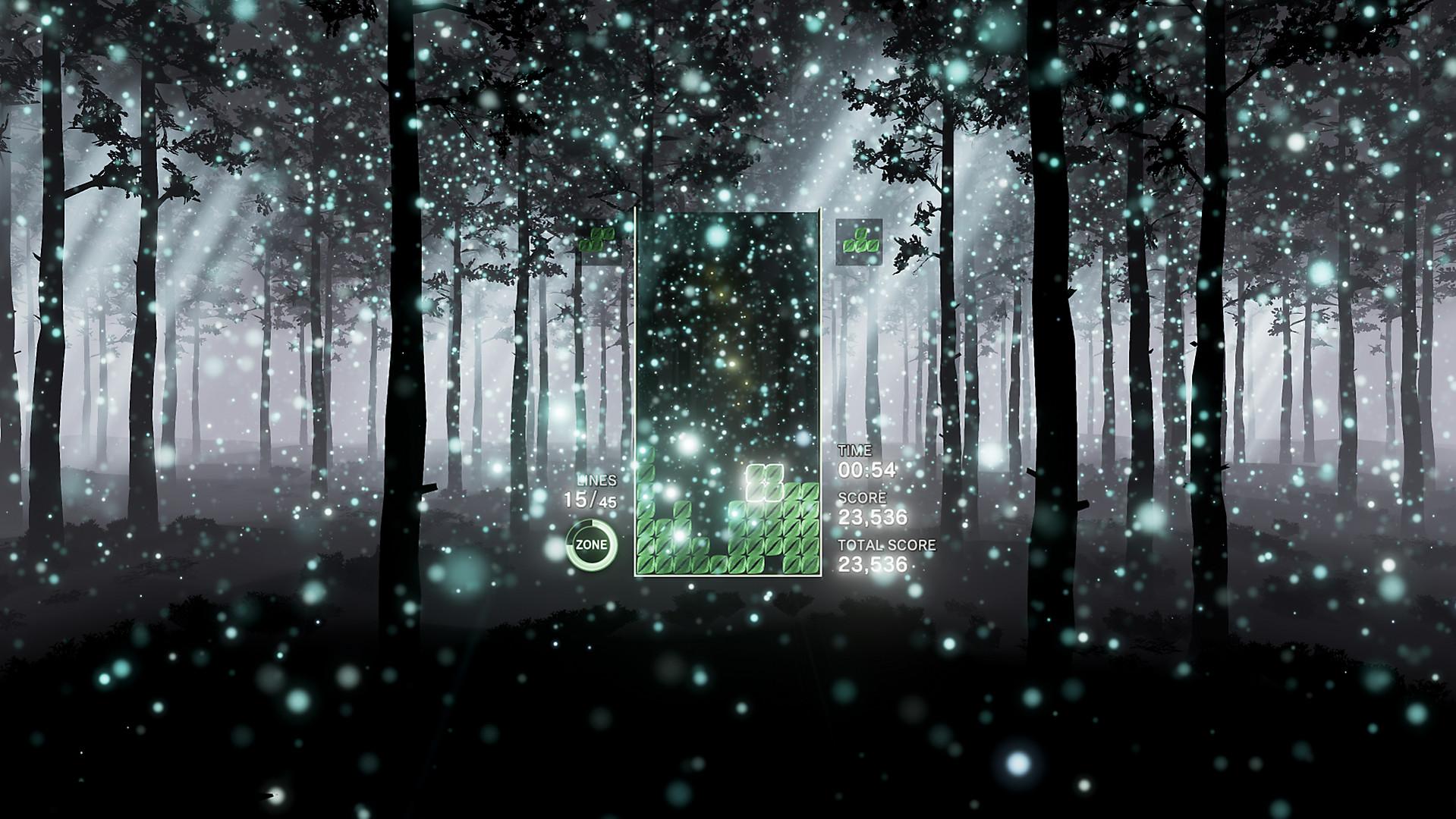 Though Journey mode can be completed in a couple of play sessions, there are plenty of other modes to keep you playing for a long time. Some modes, like Marathon, focus on the classic Tetris experience, but there are other playlists centered around relaxing or challenging gameplay. If you love Tetris, there’s plenty to do here, even if you find that you finish up Journey mode rather quickly.

In the end, Tetris Effect is a game that not only keeps Tetris relevant decades after it first launched, but brings it to an entirely new level. It’s hard to name a Tetris game that is unquestionably the best, but if we were to rank all of the games that have been released throughout the years, Tetris Effect would definitely be near the top of the list.

If you own a PS4 and you like Tetris (who doesn’t like Tetris?) then you definitely need to check out this game. The $40 price tag will seem a little steep at first, but if you’re anything like me, it won’t be long before you decide that it was money well spent. Tetris Effect was definitely a game that took me by surprise in 2018 – I certainly wasn’t expecting to like it as much as I did, and at best, I figured it would be a nice little diversion from the big-name games that were launching alongside it. I’m glad I made the decision to buy it, though, because I can tell that it’s a game I’ll be returning to for months, perhaps even years, to come.