Tesla has unveiled some new press images of the Roadster and the car looks fantastic in them. The red car in the shots is the one we have seen before, this time it’s in motion on a curvy road that will be the Roadster’s preferred home. The white car is reportedly just a shell and doesn’t drive.

The white shell is the same one that was on display at the Tesla shareholder meeting. The Roadster is certainly a sexy car and the specs are as impressive as its style. Tesla claims a 0-60mph time of 1.9 seconds. That is hypercar busting territory.

That should mean the Roadster is a drag racing demon along the lines of the Model S P100D with Ludicrous mode that has been known to embarrass supercars at the drag strip. While speed and good looks are important, Tesla has also claimed a very impressive driving range per charge.

The EV maker’s CEO Elon Musk has claimed that the car would go 620-miles per charge. The goal is to have the Roadster on the market by 2020. That decade will see loads of high-performance EVs hitting the market. 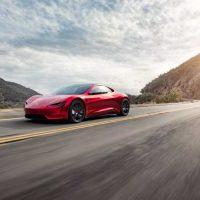 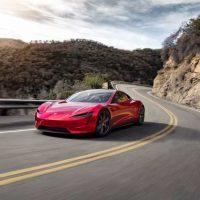 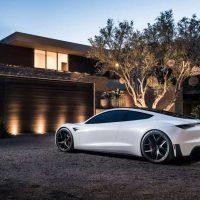 What remains to be seen is if buyers will flock to the EVs. That mass adoption of electric cars still hasn’t happened. One major reason continues to be range anxiety, the Roadster’s promised 620-mile driving range certainly addresses that concern. Pricing on the Tesla Roadster is $200,000 for the base version and $250,000 for the Founder Series.