Tertill is a solar-powered weeding Roomba

Even before this current generation of smart home appliances and the Internet of Things wave, homes of the future were already flaunting the rolling robot discs that is the Roomba. But Roombas only take care of the unwanted materials inside the house. For unwanted things outside the house, like weeds in your garden, there’s Tertill. Perhaps taking its name from a certain green, slow-moving reptile, Tertill is described as a solar-powered weeding robot. That it looks like a Roomba is no coincidence, as it was created by Joe Jones, the same man behind iRobot’s Roomba.

Tertill keeps gardens free of weed by doing exactly what a Roomba does. It goes over the garden daily or at preset schedules to check and cut weeds as it find them. How does it know what is and isn’t a weed? Simply by their height. If a plant is tall enough to touch and trigger its sensors, it leaves them alone. Otherwise it cuts them. Seedlings not yet tall enough need to make use of a “collar” placed around it that is almost as tool as the Tertill. 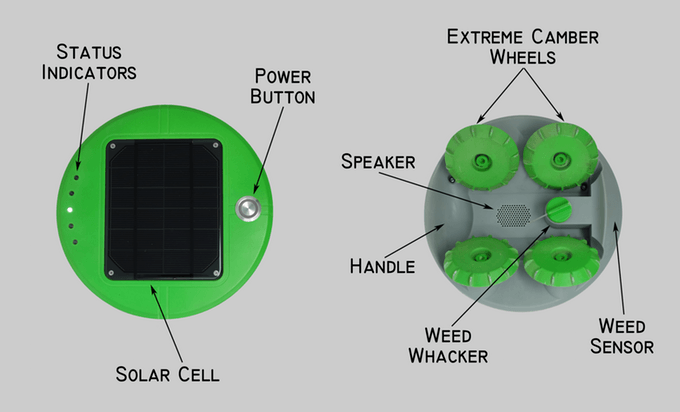 Tertill is solar-powered, so you don’t actually have to charge it or replace its batteries. It’s also waterproof so you can leave it out in the open even during rain. Although it uses similar course correction and routing algorithms as robot cleaners like the Roomba, it isn’t smart enough yet to determine the boundaries of your garden, on its own or via an app. You have to manually put up a barrier around the garden’s edges.

Although it might sound like a very niche appliance, Tertill has already raised enough funds in Kickstarter to get it rolling. There’s still about 23 days to spare before the campaign ends. Shipping is set to take place May next year.