As a concept, it sounds a whole lot like the Dash Express: a GPRS-connected PND that can access up-to-date information and web listings. I – and other reviewers – loved the Dash Express, but it seems general buyers didn’t; just this past week the company announced they were ceasing hardware development and concentrating on licensing out their technology. 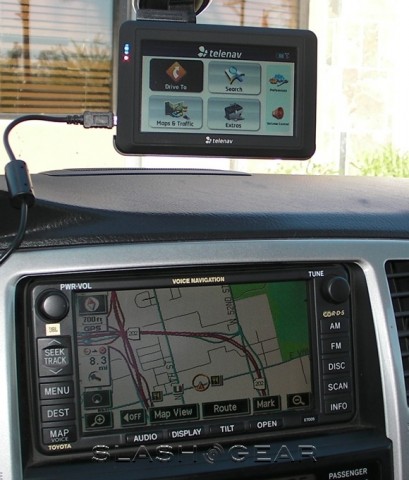 Part of the issue is that a monthly subscription can be a hard sell for regular consumers.  Telenav seem to be targeting the Shotgun to business travelers, who presumably are less likely to baulk at the $299 purchase price (that includes 3-months of subscription) and the $129 service plan (for one year’s service; two-years costs $239).  Month-to-month plans cost $12 a month.

So what does your money get you?  In the box there’s the Shotgun itself, a 4.4oz 4.9 x 3.1 x 0.75 inch box with a 4.3-inch widescreen 480 x 272 display monopolizing the front.  Telenav have picked a matte-finish touchscreen, which reduces brightness a little but does seriously cut down glare.  Physical controls are limited to the power button up top and a reset button on the back; there’s also a mini-USB port and 3.5mm headphone jack on the left-hand side, and a microSD card slot on the right.

Viewing angles of the LCD are good, which is handy as the standard mount Telenav supply offers less flexibility than that included with rival PNDs.  Only one main point of adjustability is present, in the shape of a ball joint where the Shotgun meets the mount, but the range of its movement is limited.  That, coupled with the fixed arm, means in some vehicles you might be unable to tilt the Shotgun up as far as you’d like.  Not such an issue in an SUV with an upright windshield, but sports cars or anything with a steeply raked window may encounter problems.  Build quality, though, is good, and the suction-clamp proved tenacious.

I’ve only had the Shotgun for a couple of short days, so like the device; my hands-on review is still a work in progress.  I commend Telenav for taking release to market now and improve it over time approach. Shotgun works as advertised and should be an even better PND with additional features and fixes via the automatic updates.  That’s important to note, as every issue I’ve noticed could readily be addressed with a software tweak rather than demanding a hardware change.


For instance, when the Shotgun can’t get a satellite signal when you first turn it on, it simply won’t accept an address until it gets a GPS lock.  So I found myself repeatedly trying to create a route, only to be told at the last minute that the unit was not ready.  Telenav needs to at the very least add a notification that a signal fix was made or, preferably, look to rival PNDs that allow you to enter the address and then cache it until navigation data is ready.

That frustration aside, address entry is straightforward.  The Shotgun first takes city and state (offering you your last entered city by default) and then house number and street; there can be a pause during entry as its database is searched, but coming up with a match was generally speedy.  Once found, you can choose to create a new route to that address, save it, or simply look at it on a map.  Routes can be calculated prioritizing the fastest, shortest, traffic optimized, those preferring highways or streets, or for pedestrian directions; however they can only be point-to-point, with no option for multi-destination journeys.

If jabbing at a touchscreen isn’t your idea of fun, then you can do all your address entry before you even leave the house via the Telenav website.  The process is basically the same, except you get to use a full-sized keyboard; you can then send the address wirelessly via the GPRS connection to the Shotgun itself.  Telenav also offer a browser plug-in that lets you highlight an address on any webpage and, with one-click, send it straight to your Shotgun.  What we found equally as useful is the ability to receive shared addresses from friends, handy when you’re already on the move and trying to find a new location.

Of course, the benefit of a permanently connected PND is that the latest Points of Interest (POIs) can be instantly accessed.  The Shotgun gets off to a great start here, with a huge 11 million preloaded and, thankfully, categorized into comprehensive subsets.  That includes restaurants, split into cuisine subsets, but unlike rival systems there are no reviews; similarly, the Shotgun lacks movie theater show times.  You can search POIs based on your current location, a point on your route or an ad-hoc address.

More usefully, the Shotgun can sort gas stations by price rather than just proximity.  This relies on updated fuel costs being downloaded via the GPRS connection; choose your preferred fuel type and you’ll get a page of the cheapest places to get it.  I’m not entirely clear where the pricing data comes from, but it seems relatively accurate in my limited testing; my only request would be for the ability to sort the price-list a second time, by closeness to your current position.

When traveling, all that screen real estate means there’s plenty of room for a bird’s-eye view of the roads, large “upcoming turn” indicator and ETA/direction/battery strength panel without it feeling at all crowded.  In fact, I’d like to see better use of the space: this first-gen PND can’t compete in graphics terms with systems from Garmin, TomTom and others that have 3D cityscapes or even just true-view intersection signs.  Screen refresh is also lacking, being jerkier than the smooth panning on rival PNDs.  Telenav may need to tweak the zoom levels, too; not only do they hold back too much at complex turns, but if you manually zoom in for a temporary closer-look the Shotgun doesn’t automatically draw back again after the junction.  This could be seen as a benefit, if you prefer a completely manual zoom, but I’d like to at least have the option. 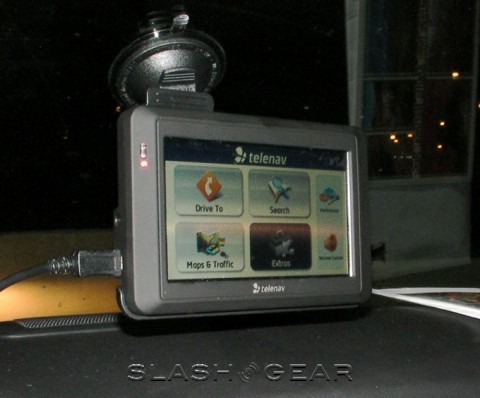 There is a day and night mode and, if you’re lazy, you can set it to automatically switch over.  That flips the maps to a color scheme less likely to cause night glare, but it makes no change to the menus and other info screens that are still predominantly bright white.

It feels great in your hand if you’re using it in pedestrian mode to roam around town.  During my test, I only found relatively minor issues and annoyances such as the blue and red blinking status light on the left hand side or having to exit navigation mode just to change the volume.  The voice prompts are, as standard, pretty quiet, but they’re comprehensive and the text-to-speech system mangles surprisingly few addresses.

Traffic status is updated at roughly five-minute intervals and mapped out in the form of different colored roads.  In fact, Telenav make great use of color to indicate delay status; aside from the map there’s a full route road list with each color-coded, showing estimated speeds and offering more in-depth incident information.  Re-routing can be manually triggered or left to automatically calculate if you miss a turn or traffic conditions change.  Here the Shotgun lags behind rival devices, or perhaps gives drivers more credit than they’re feasibly due: several times I’ve been too close to the turn-off for new routes by the time it was suggested.

Despite the 3.5mm headphone jack there’s actually no media player on the Shotgun; in fact extra functionality is notable by its absence.  With so many manufacturers seeing Bluetooth hands-free as an obvious way to add value to their PND, it’s strange that Telenav have missed it out.  One perhaps obvious extra would be the ability to go online via an integrated browser.  Currently there’s no way to do so, and the company tell us that, while they’re considering it, there are still questions over what affect all that extra data access would do to the monthly subscription.

On the positive side is the fact that, because of the data connection, Telenav can push out feature updates small or significant without users being forced to mess with their own downloads or plug in USB cables.  In fact, it’s that fact – and the company’s apparent attitude to feedback – which leaves me feeling positive about what’s so obviously a first-gen product.  Not only is Internet access being considered (I can envisage some sort of server-side caching and reformatting, similar to on the Sidekick, to make the most of that relatively-slow GPRS hook-up) but Telenav tell me that movie times, restaurant reviews and other POI finessing is also a work-in-progress. 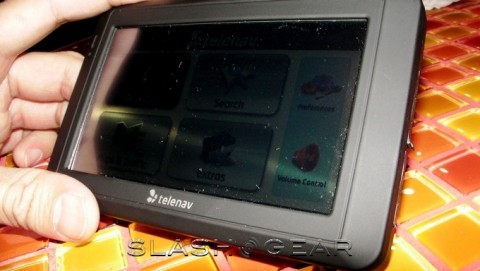 Will that be enough to persuade customers to buy into the Shotgun and, more importantly, commit to a service plan?  Let’s not forget that Telenav are already in that business, providing the technology for AT&T’s Navigator system for cellphones.  Navigator is priced at $9.99 per month with data fees on top; compared to that, the Shotgun’s $11.99 month-to-month fee seems reasonable, including as it does data.  Compare the Shotgun to Navigator over two years (paying up front) and the monthly-equivalent fee is actually a few cents less than the AT&T service.

No comparison is so straightforward in real life, and of course there’s the initial $299 for the Shotgun itself, but I can’t find too much to fault with the hardware you get.  If Telenav keep to their promises of rolling out regular, significant feature upgrades then they could succeed where Dash struggled.

I’ll update this review with battery life when I’ve used the Telenav Shotgun for a more extended period; the company themselves estimate a low 2.5hrs from the Li-Ion battery.

An update just come over pertaining to the Telenav Shotgun and Tele Atlas: 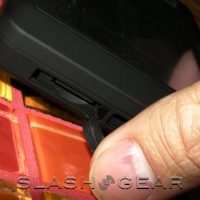 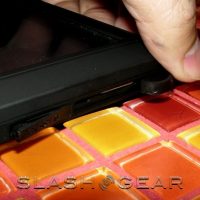 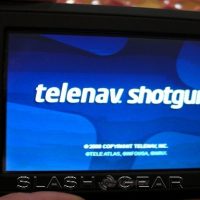 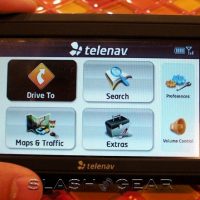 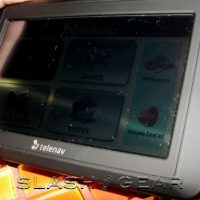 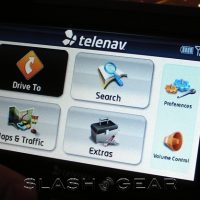 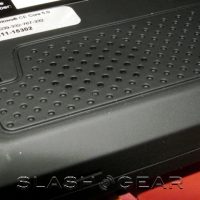 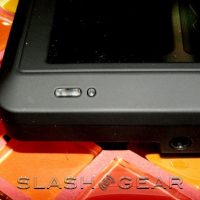 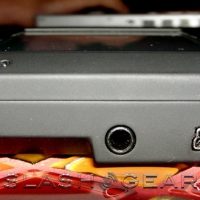 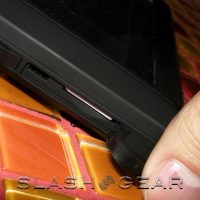 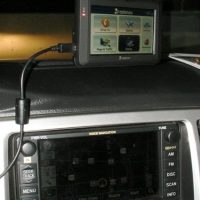 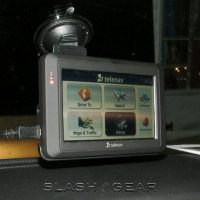 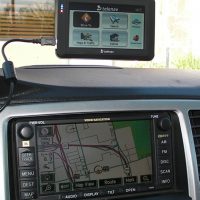