T-Mobile has recently made some changes to its smartphone data service requirements. Previously, customers were allowed to simply just nab the 200MB data plan when activating a smartphone, which certainly saved on costs, but now the carrier is bumping up the minimum to 2GB of data when activating a new smartphone plan.

The change went into affect October 10, and requires any new customer activating a smartphone to choose the 2GB data plan at the very minimum. The good news is that this doesn’t affect existing customers who are using the 200MB data plan, and even better, it won’t affect current customers who upgrade to a new smartphone in the future. 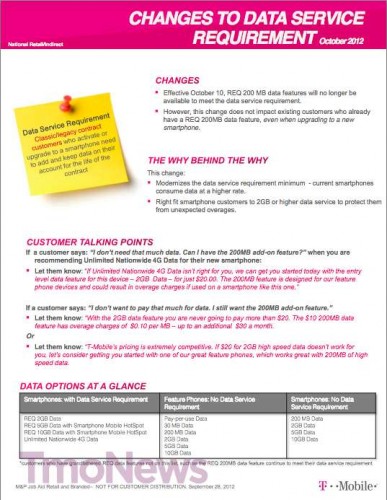 T-Mobile said it made these changes simply because modern smartphones consume a lot of data, and 200MB just doesn’t cut it usually, so in order to prevent their customers from getting unexpected overage charges or throttling, the carrier has decided to require at least 2GB allocated to each smartphone activation.

This was certainly a good move for T-Mobile, and while the changes will essentially bring in more revenue for the carrier, helping their customers out by protecting them from overage charges is something you don’t see every day from other carriers. Then again, we’re not sure why more customers don’t just go for T-Mobile’s unlimited plan while they still can.