The days when a household only had one computer connected to the Internet is ancient history. Never mind desktops and laptops, the sheer number of smartphones, tablets, and even smart TVs means that we have started needing networks akin to very small home offices or businesses right in our abode. Network routers have evolved to take on the needs of modern-day users and the Synology RT2600ac is the famed NAS maker’s second stab at this market that’s already crowded with the big players. So how does it fare? Surprisingly well, despite its rather modest and unassuming looks.

Router makers seem to have a penchant for making their boxes look not only futuristic but also intimidating. It’s almost as if they were compensating for the fact that routers aren’t exactly the most visible parts of a computer network. You connect them, configure them, and mostly forget about them until they start acting up. 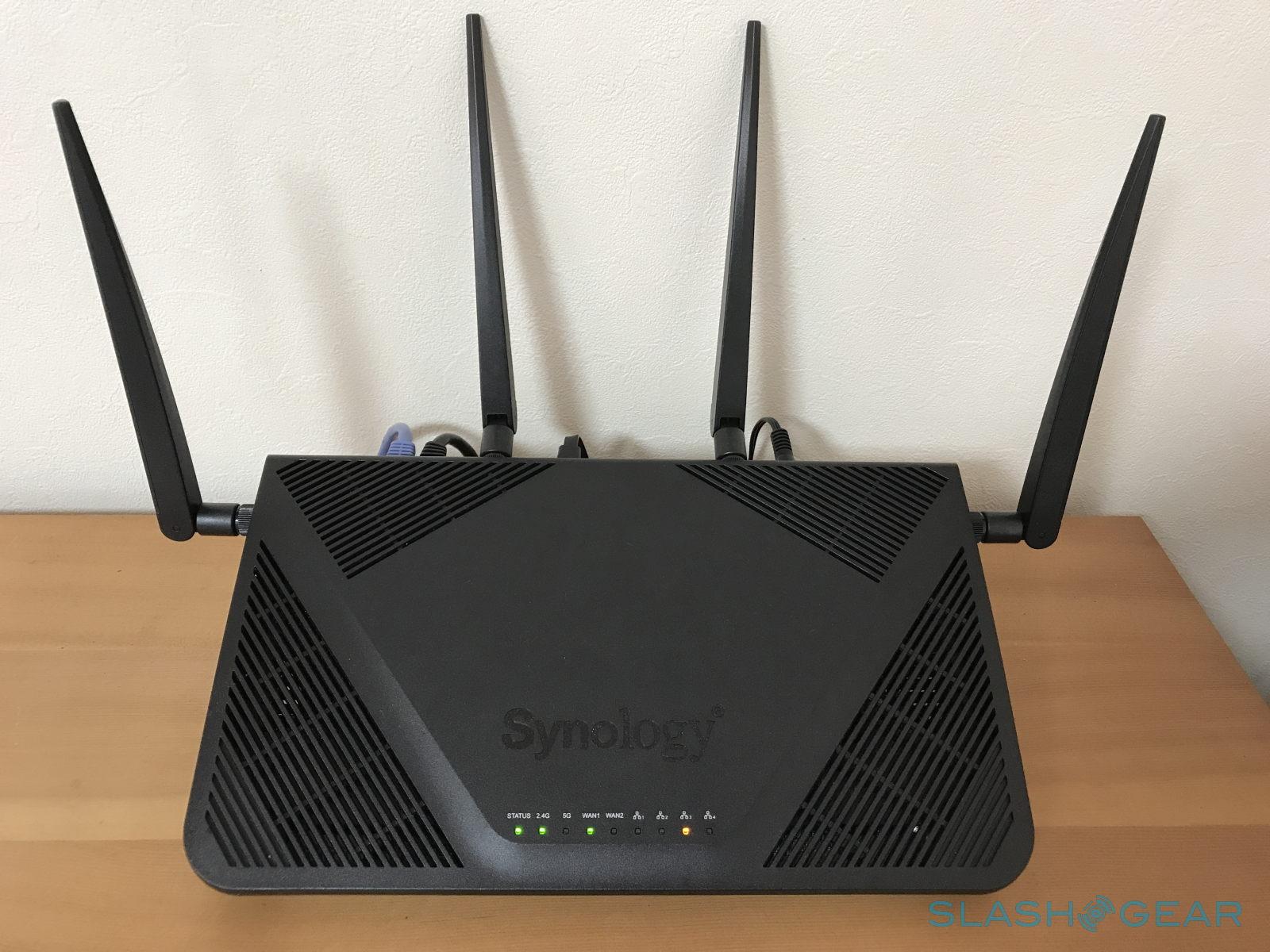 In contrast, the Synology RT2600ac is almost too humble. Sure, it still has those four antenna, but that’s common nowadays for modern routers that support 4×4 MIMO features. The top of the box, which is its most prominent surface, is quite plain. Aside from the typical branding LED lights, the only distinctive feature is the ventilation grilles. The sides and the back are where the action is, filled with ports and buttons.

On the front sits a lone SD card reader that will give mobile photographers joy. On the right, you have buttons dedicated buttons for both Wi-Fi and WPS One the left you have a USB 3.0, one of two USB ports on the router. Funnily enough, as if there weren’t enough things going on, Synology has an eject button for safely removing USB drives and SD cards. 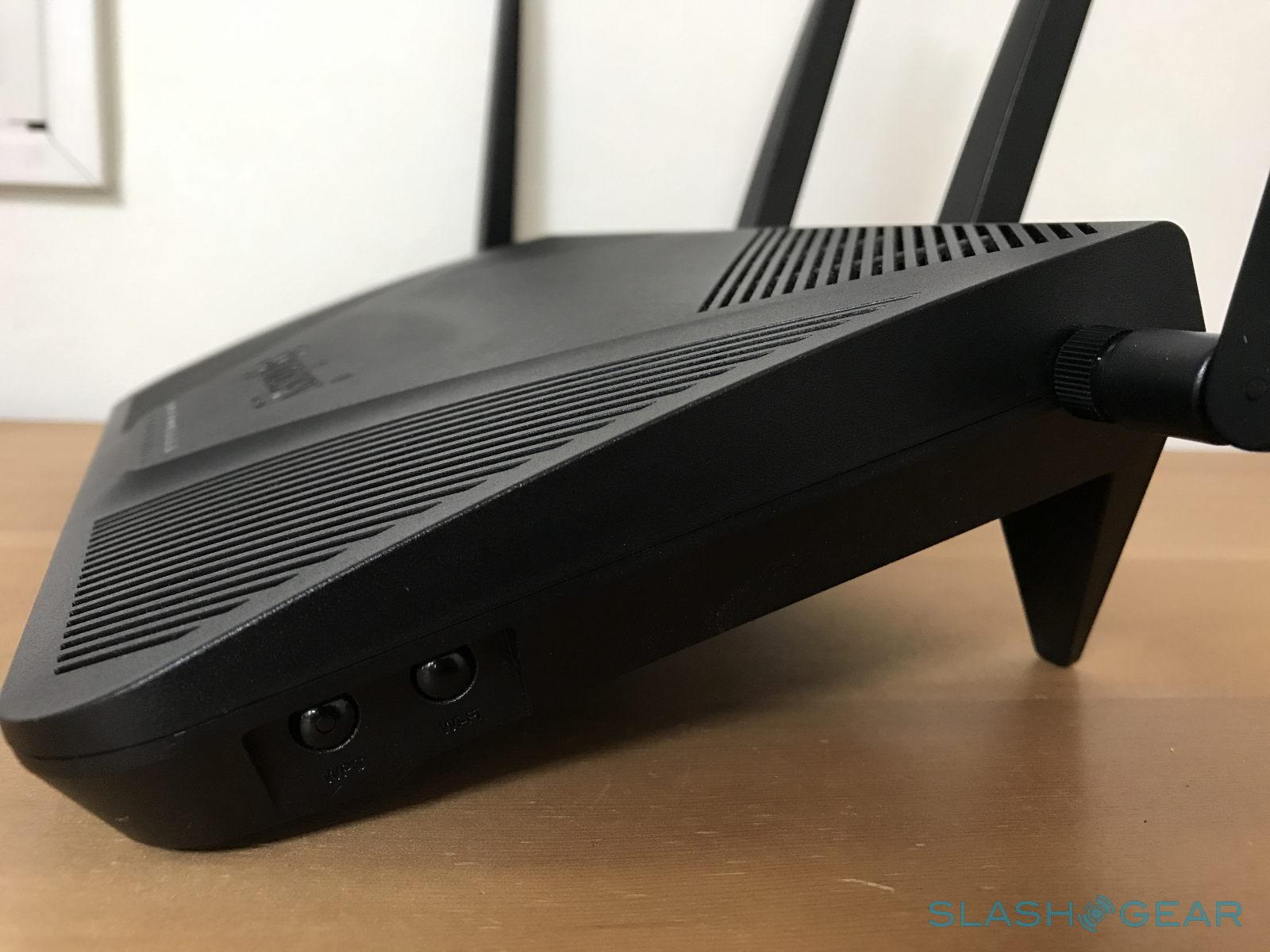 The back is unsurprisingly home to the most of the ports, which includes a USB 2.0 port. This is also where we see one of our biggest gripes with the RT2600ac. For all its features, which we’ll go into detail later, it only has 4 LAN ports. And, if you choose to enable dual WAN, you’ll really be left with only 3.

In terms of performance, both in speed and range, the Synology RT2600ac isn’t going to break any records. It has an advertised 1.73 Gbps on the 5 GHz band and 800 Mbps on the 2.4 GHz band, but those are only in ideal situations. Like when you’re close to the router with no interference. Signal degrades around 20 meters or so. 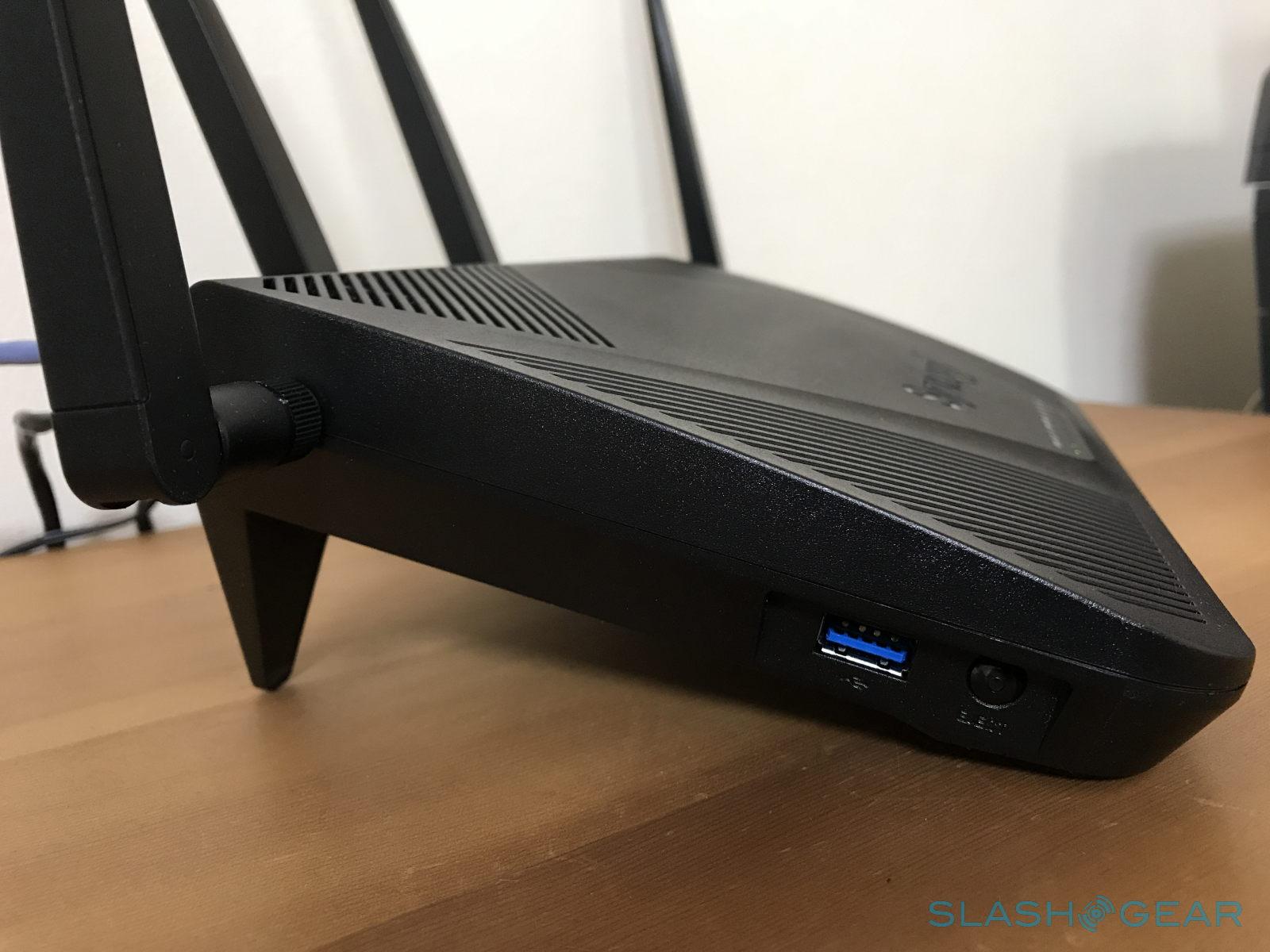 To put it in more practical terms, in a four-story concrete building with the router on the ground floor, you’d get usable but degraded reception at the 3rd level and almost no signal on the fourth. At that point, turning off the 5 GHz band might actually be more beneficial to the performance.

The RT2600ac performance is fairly decent but not earth-shattering. If you were to write it off just because of that, you’d be making a grave mistake. If you were looking for a router with blazing fast speeds, you might indeed want to stop here. But if you were in the market for a “router plus”, then you might want to brace yourself, because Synology’s router is exactly that.

Right out of the box, the RT2600ac comes with your staple of networking features, like web filtering, monitoring, traffic control, and such. It even has parental (or dare we say managerial) controls that can block HTTPS sites like Facebook or YouTube.

One feature in particular is a bit of a two-edged sword. The router is Dual WAN capable, allowing you to use the first LAN port as a second Internet connection source. It isn’t, however, capable of dual output, that is to say, wireless bridge. So you can’t, for example, combine two LAN ports to make a single, super fast network connection. Which is probably for the best, since you have a very limited number of LAN ports anyway. with Dual WAN and link aggregation, you’d just have one LAN port left to use. 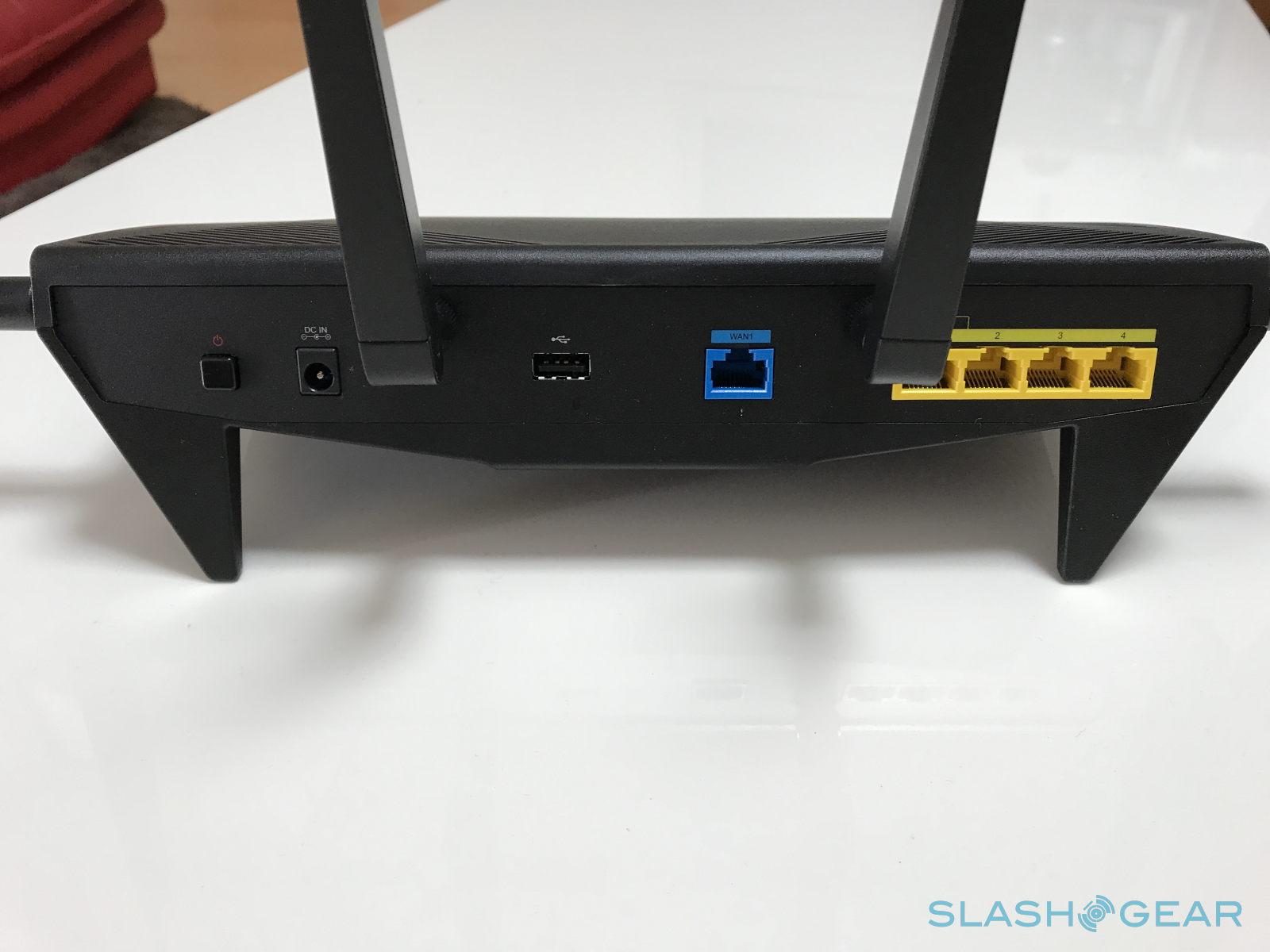 Where the Synology RT2600ac shines, however, is in the features that aren’t configured or even installed by default. Unlike companies like Netgear, D-Link, and Linksys, Synology is a budding router maker coming from a NAS background. There, it has more than enough experience in giving users options to customize their storage devices for specific purposes they might have. Synology has brought some of that spirit into the RT2600ac, with add-ons that turn the router into a download manager, network security guard, or even a NAS.

Synology provides 8 such add-ons by default. Some of these add-ons might be of more use for most home owners. Download Station, for example, lets you manage downloads from almost any source, including the infamous BitTorrent protocol. Media Server and Cloud Station Server practically transform the router into your own personal cloud, accessible even remotely via Synology or your own remote access. 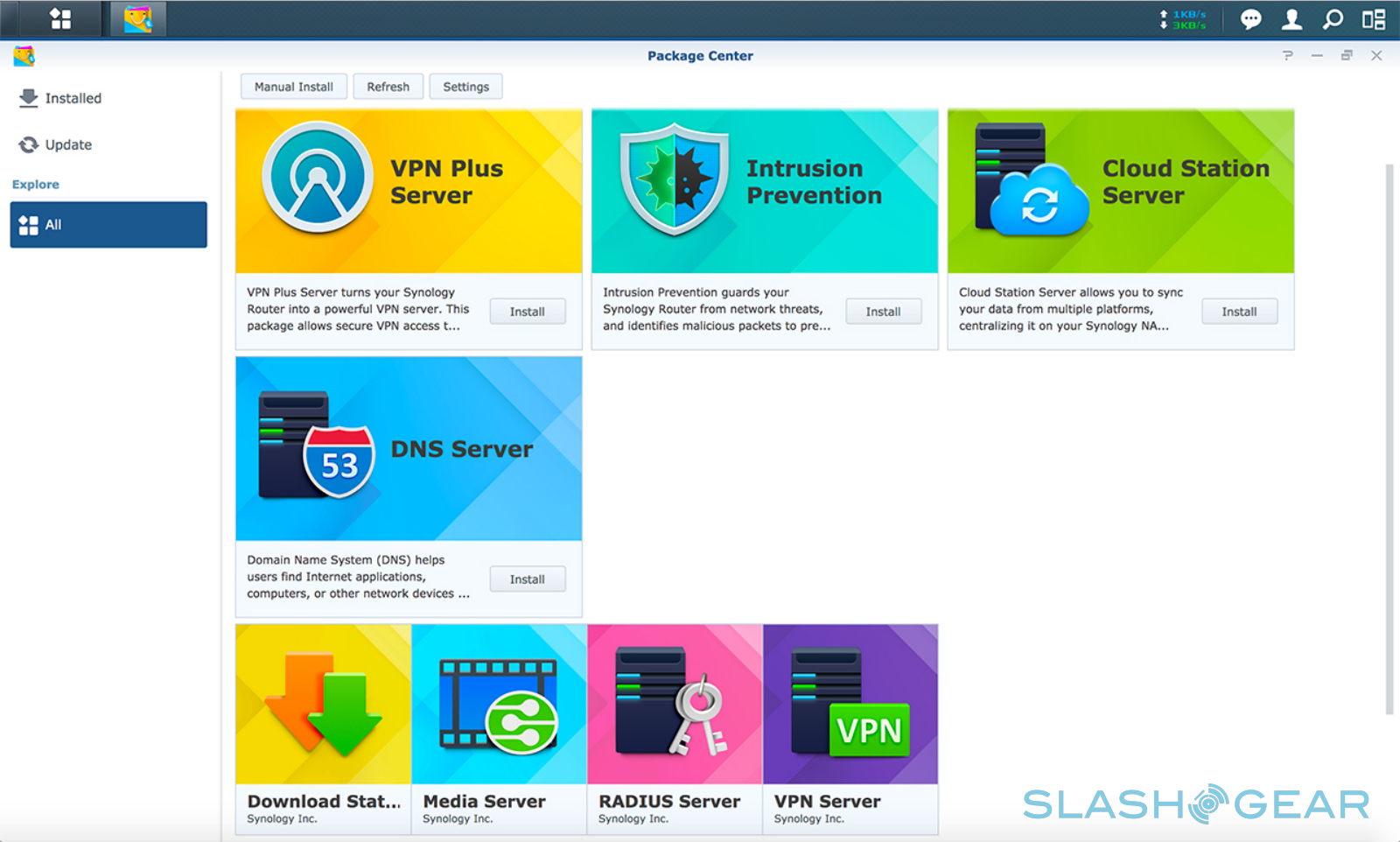 Other add-ons offer enterprise-level features more suitable for home offices and more advanced users,like VPN and DNS. Together with the ability to attach external USB storage, the RT2600ac can become a makeshift NAS device. Sure, you may no longer need to buy a dedicated Synology NAS, depending on your needs and use case, but, since you’re still buying from Synology, the company still wins.

So the RT2600ac is loaded with features, though many of them quite optional. More features, however, usually means more things to manage. If you’ve ever dreaded diving into the maze that is a router firmware webadmin, you can breathe a sigh of a relief. If you’ve ever used a modern OS, like, say Windows, you’d feel right at home.

It’s called the Synology Router Manager or SRM and probably traces its roots in Synology’s DiskStation Manager DSM. Both have the same key feature: presenting a familiar user interface for managing a network-attached device. And by familiar, we mean “windows, icons, mouse, and pointer”. Or WIMP, in the parlance of old. 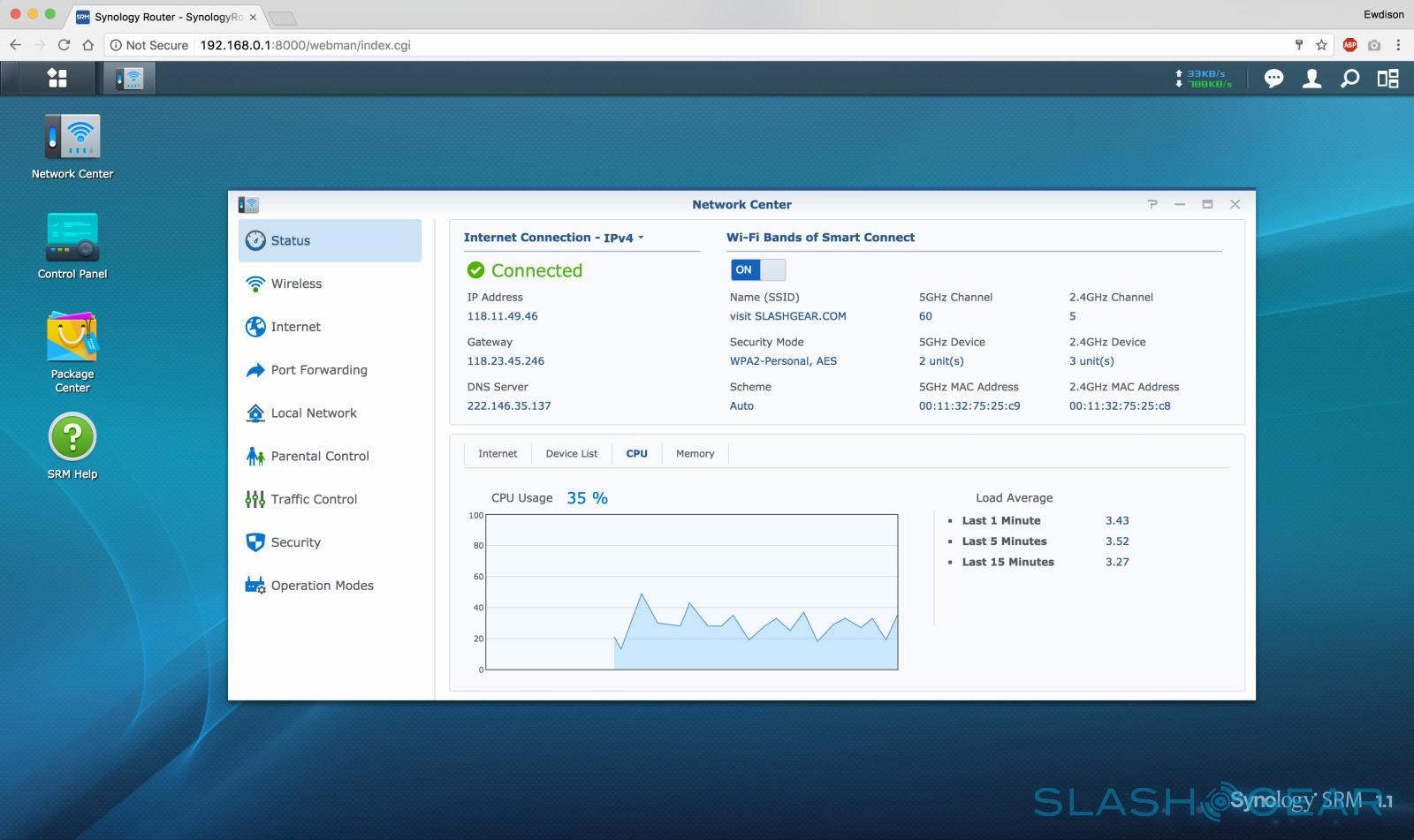 Although you still do everything inside a web browser, the presentation makes all the difference. You have destop icons for the most common settings and tasks, a panel for statuses and at-a-glance info, and a “Start Menu” for everything else. Managing those add-ons is not unlike managing apps on conventional operating systems. In short, controlling the RT2600ac is pretty much similar to controlling a regular OS, and that, unfortunately, goes for setting it up. Getting the router up and running is more akin to setup and installation wizards of computers rather than the more straightforward process of almost all routers. Once that initial setup is done, however, everything else is a breeze.

You don’t have to use the web interface, though, especially when you’re out and about. Synology provides mobile apps, both Android and iOS, for monitoring the router, whether at home or, depending on your account setup, remotely. You don’t have all the bells and whistles, of course, but you’ll be able to at least tweak parental and traffic controls as needed. 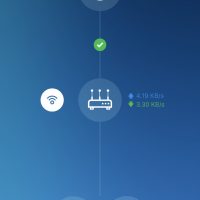 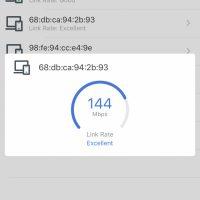 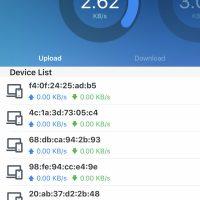 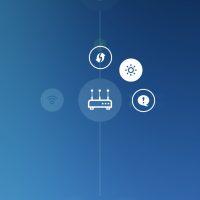 We’ll be honest. In a race of speed or distance, the Synology RT2600ac isn’t going to bring home the gold. Being only its second router ever, Synology can, perhaps, be excused for some lapses in this area. But in a market filled with Netgears, Linksyses, D-Links, and TP-Links, Synology has to choose its battles well. And it chose to fight with what it knows best: network-attached storage devices.

The RT2600ac isn’t a router and NAS in one. But it can if you need it to be. Or it can be an enterprise-oriented gateway for your home office. Or an entertainment center for your living room. Or a download manager for such entertainment. Or all of the above! Bottom line, you’re not exactly limited to the built-in features or extras that the router maker provides. And you don’t also have to pay the price for those extras. Just need a regular router with competitive performance with no other added cruft? It can do that, too!

Sadly, the RT2600ac does leave us wishing Synology had some foresight into some of those features. The dual WAN is great but leaves you with one less LAN, and the add-ons idea is also great but could use a bit more beyond the 8 that Synology ships with.

Despite all that, the Synology RT2600ac still offers a great balance of performance and features, both basic and add-on. A “router plus” if you may, for the price of a router under $300.