Superbook blasts through Kickstarter to turn phones into laptops

That went by really quick. Superbook, the “thin” shell that practically converts your Android smartphone into a laptop has zoomed past its crowdfunding goal in less than 12 hours. Unsurprising given its $99 base pledge. Not so small a feat either in comparison to the team’s previous crowdfunding attempt with almost the same goals, albeit with a dock limited to certain smartphone models. With funding now secured and more still coming in, all that’s left is to see if they will be able to deliver, on time or not, unlike so many other failed similar promises.

Superbook’s wild success proves that there is indeed a market for this type of accessory, with nearly 2,000 backers intent on turning their smartphones into a truly more productive device. Superbook’s promise is simple in concept but not that easy to pull off in practice. In a nutshell, it displays a desktop-like interface on the Superbook, which doesn’t have processing power of its own, once an Android smartphone is connected via a USB cable.

This isn’t the first time this idea has been suggested. To some extent, we can find the precursor in Microsoft’s Continuum and Ubuntu’s Convergence, though both implied a more stationary, desktop use case. HP is probably the first to propose a portable solution and commercialize it with the HP Elite x3 Lapdock, still coming soon. And there have also been other crowdfunded attempts as well, one of which has been delayed almost indefinitely due to fire at a production facility. 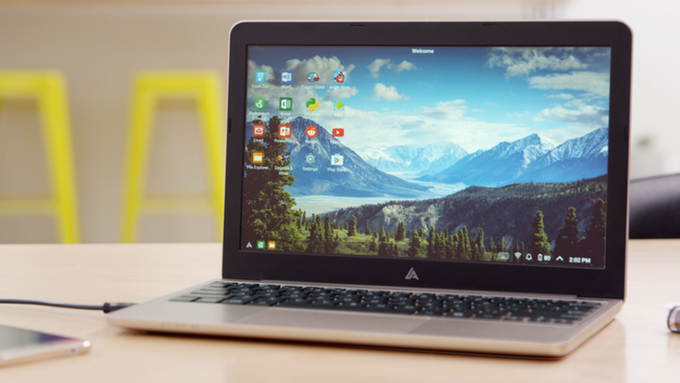 In the grand scheme of things, one could say that the hardware is actually the easier task to accomplish, though it is also the most costly. The other part that makes Superbook possible is the Andromium Android app, which presents a desktop user interface on top of Android. Unlike something like Remix OS, it doesn’t replace the version of Android running on the smartphone but simply adds a layer on top of it. Unlike Maru OS, it doesn’t run a separate and completely different OS on top. It promises the best of both worlds, with complete access to the same apps and files on the smartphone while presenting a familiar interface better fit for a laptop. Andromium is actually already available in beta form on Google Play Store.

The Superbook itself is very basic, as it practically only has a display, keyboard, battery, and a USB-C port. It’s so basic that the 11.6-inch HD screen might be a tad too low for some. A stretch goal, set at $1 million, would offer an upgrade to 1080p. Andromium says that all smartphones running Android 5.0 or higher are supported, as long as they have USB OTG support, whether or not those support HDMI video out or similar. If all goes well, and they usually don’t, the Superbook will ship to backers in January and February 2017.