There’s no doubt that software piracy is a major issue around the globe, costing companies and developers no small amount of money. In an attempt to better understand the practice on national levels, a group of researchers from Germany’s MPRA have conducted a study determining that the rate of software piracy is significantly lower in countries with a higher collective intelligence.

“We find that intelligence has statistically significant negative impact on piracy rates,” the MPRA researchers write in their paper, titled “Intelligence and Crime: A novel evidence for software piracy.” The researchers aren’t trying to argue that a low national IQ causes piracy, only that there is a connection between the two.

In looking at more than 100 counties, they compared national IQ scores with the Business Software Alliance’s reports on software piracy rates by nation, creating the following graph: 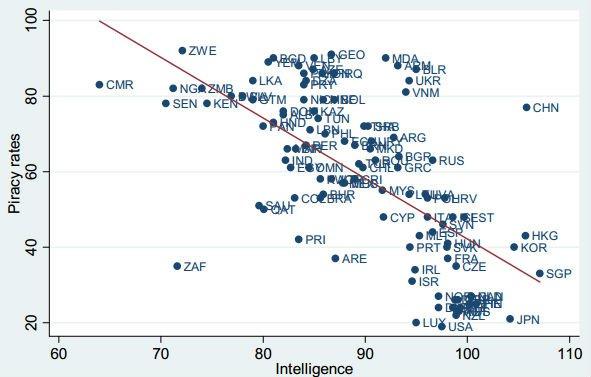 Several countries didn’t fit into this pattern, with China representing both a high collective IQ and high rates of software piracy, while South Africa is seen with a low national IQ and low piracy rates.

“After controlling for the potential effect of outlier nations in the sample, software piracy rate declines by about 5.3 percentage points if national IQ increases by 10 points,” the researchers reported.

However, the group notes that a high national IQ isn’t required to lower software piracy; in other words, a country isn’t doomed to high piracy rates because its people aren’t intelligent enough. The researchers write that piracy can still be lowered as long as the authorities create and enforce policies aimed at fighting it.