Steve Jobs at D8: Flash, the iPhone HD, and Everything Else

The Wall Street Journal’s annual “All Things D” conference kicked off tonight, and it started off with a presence that’s all too familiar in the technology industry. A presence that actually hasn’t made an appearance in a few years. And, above all, a presence that’s a welcomed entity on any stage, in any location. Steve Jobs, the co-founder of Apple, sat on the D8 stage tonight with Walt Mossberg and Kara Swisher, talking about everything that involves Apple. Of course, they took the time to talk about everything else, too; including Adobe, the next iPhone, casual gaming, and even security and the App Store. After the break, take in the comprehensive coverage, from start to finish, noting all the important parts.

The interview with Steve Jobs opened with some recent news regarding Apple surpassing Microsoft in market capital. Steve Jobs was quick to comment, saying, “It’s surreal, but it really doesn’t matter.” Curious answer, if you ask us, but at the same time it would seem to make a lot of sense. After all, the market capitalization is always changing, and even as the story broke, Microsoft continuously inched closer. The numbers are always changing, in favor and against every company out there, and despite the fact it is a momentous occasion for the Cupertino-based company, we can see why he’d want to shrug it off, and keep his focus on what’s coming next.

It didn’t take long at all before the conversation turned to Flash, Adobe, and Jobs’ recent “essay/letter” that was sent out a few weeks back, and how Apple felt about the company and their product. One of the more interesting quotes from Jobs would have to be: “Apple is a company that doesn’t have the resources that everyone else has. We choose what tech horses to ride, we look for tech that has a future and is headed up.” He goes on to say that sometimes you have to pick the right horses, and according to Jobs, HTML5 is the right horse. Adobe’s Flash may have had its time in the limelight over the past several years, but that’s not stopping HTML5 from rising, gaining more traction, and ultimately taking over. 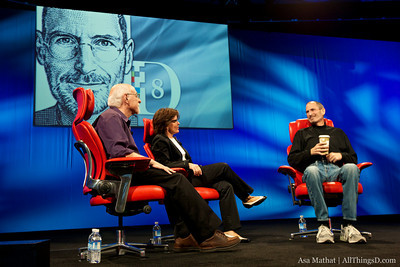 We should note that Jobs compared Adobe’s Flash with HyperCard, stating that it was “huuuge” in its day, but we all know what happened there. Furthermore, Jobs went on to say that Apple didn’t pick a fight with Adobe; in fact, he never expected it to turn out the way it did. “We’re not trying to have a fight with Adobe. They came after us… we were getting tired of being trashed by Adobe in the press.”

When it comes to Flash, Apple and Steve Jobs do not believe it makes the perfect Internet experience that Adobe and its advocates preach. Jobs is trying to make a great product, and he (along with Apple as a whole) does not believe that Flash aides them in this cause. That’s why they chose to leave it out, plain and simple.

Of course, the lost iPhone came up. Just as we should have always expected it to. The story itself is one that we all know too well, and Jobs even considers it to be an amazing story. He doesn’t come right out and say it, but he basically equates it to a mystery story, with its devilish plot twists and everything else in between. He admitted, just as he had done before in other venues, that the iPhone that was found, and subsequently sold to a particular entity, was indeed a prototype being tested in the wild. He adds that it’s still up for grabs whether or not it was found at the bar, or stolen out of the person’s bag. That’s something we imagine won’t actually get decided upon; but if it does, it will come out of the police report that will follow the investigation that the District Attorney is still following up on.

We’ll tie together the talk about Foxconn, Microsoft, and Siri right here. First and foremost, Jobs wanted to make sure that everyone knows that the factory is not a sweatshop. By any means. He points out that the facility, which seconds as an entire city with upwards of 400,000 employees, has restaurants, theaters, swimming pools, and other things to make the experience better. “For a factory, it’s a pretty nice factory.” As for being in a platform war with Microsoft, Jobs had some enlightening words on the matter, after being asked by Mossberg whether or not he views the situation as another platform war. “We never saw ourselves in a platform war with Microsoft . . . Maybe that’s why we lost.” Jobs adds that he and his company just wanted to make good products, and focused only on that. When he was asked about whether or not he felt “betrayed” by certain entities at Google, Jobs replied, “My sex life is great.” Which, for the most part, completely destroyed that line of questioning. As for Siri, Jobs pointed out that it isn’t a search engine, and that his company has no plans to get into the search business. He chalks Siri up to being an AI company, and that’s it. 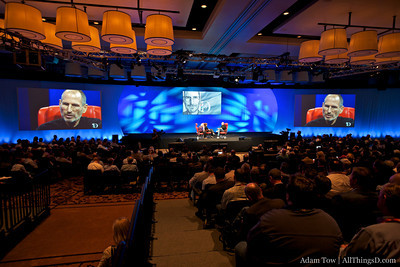 Jobs did a good job of defending the wireless carrier showing off Apple’s iPhone. He said that for what it’s worth, AT&T is doing a great job. Especially considering “they deal with way more data traffic than anyone else.” He went on to point out that he believes if the iPhone had launched on any other network here in the States, the capacity that it did, that network would have done the same thing under the pressure. Bold words for the strengthening of AT&T’s network, even on just a “belief” basis, but it looks like Apple still has a lot of faith in the second largest wireless carrier here in the States.

The obvious question about an iPhone appearing on a new network came up, just as everyone knew it would. When he was confronted about it, Jobs remained stolid, unmoving. If you had to guess an answer based just on his facial reaction, you’d probably get the same answer he gave vocally. When Mossberg asked if there would be advantages of to having two [carriers] in the US, Jobs replied, “There might be.” And, more directly, when asked if there was an iPhone coming to a new carrier, Jobs simply said that, “You know I can’t comment on that.” Very vague wording, if you ask us, but at the same time we’re still weary.

Probably one of the most interesting parts of the conversation, though, came out when Jobs admitted that the iPhone began as a tablet. In fact, Jobs charged Apple with creating a tablet first, but when their first incarnation of the hardware, together with the software didn’t equal up to what Jobs wanted, he changed the plan to a phone. And, as the old saying goes, the rest is history. “My God, this would make a great phone,” he reportedly said, before the tablet idea was shelved.

As for the iPad, Jobs said that despite the range of tablets that had come out before it, they had to essentially start from scratch. They couldn’t use a stylus, and they couldn’t use a PC OS, so they had to make something brand new. As for what it means for the publishing industry, he went on a wide array of points. But, while he believes that the iPad is going to do quite a bit, if not most of the work in of itself, to save the publishing industry as its own industry, he wanted to make very clear that, above all, he wanted to make sure that the print industry can’t fail. To the point, he said, “I don’t want to see us descend into a nation of bloggers. I think we need editorial oversight now more than ever.” Strong words, but it’s obvious that he believes the old world of print media, or media in general, still holds a place in this world, and that if Apple can aide in its survival, then that’s exactly what Apple will do. Quite a large weight on their shoulders.

App Store rejections came up, and Jobs was quick to defend his baby. As well he should be, as he points out that Apple supports an open platform in HTML5, but that the App Store itself is on a “curated platform.” Also known as iPhone OS. They have to judge each application that comes into the App Store, and doing that causes some problems. Unfortunately, based on their explicit rules, even the applications that probably shouldn’t be denied get blocked sometimes. And of course, these are the applications that make the news. “We have a rule that says you can’t defame people,” says Jobs, noting that political cartoonists by virtue of their profession sometimes defame people. The cartoon app was rejected on those grounds, he adds. “Then we changed the rules, and in the meantime the cartoonist won a pulitzer. But he never re-submitted his app. And then someone asked him, “Hey why don’t you have an iPhone app?” He says we rejected it and suddenly it’s a story in the press. Bottom line is, yes, we sometimes make mistakes, but we correct them.”

“People are using apps way more than they are using search,” says Jobs. “So if you want to make developers more money, you’ve got to get the ads into apps. But the mobile ads we’ve got today rip you out of the app.” This very telling quote is from a question regarding iAds, the new venture from Apple that will debut in iPhone OS 4.0. The main goal of the platform is to make developers more money, as it makes the ads part of the application, and not something that’s necessarily “separate,” and therefore more obtuse and obtrusive. He wants to change ads, because he believes they aren’t good enough at the moment.

In the end, there was a Question and Answer part, and while there were some good questions, we feel like we should end on somewhat of an entertaining note. Jobs was asked by someone in the crowd, “Steve, we love our iPhones, but our concern is that we can’t make a phone call on it. Is someone working on that?” Jobs replied: “You can bet we’re doing everything we can do. … I can tell you what I’m told by reliable people: to make things better, people reallocate spectrum and they do things like increasing backhaul and they put in more robust switches; and things in general, when they start to fix them get worse before they get better. If you believe that things should be getting a lot better real soon.” Hopefully you weren’t expecting any kind of iPhone HD announcement tonight — WWDC is right around the corner, and that’s where the big news will hit. Of course, you need to also remember that we’ll be there, liveblogging the whole thing, which you can find at http://live.slashgear.com, and you need to be there to be caught up on all things Apple.