When I woke up this morning, there was an early Christmas gift waiting for me on my phone. A new Star Wars trailer — a teaser, really — was released today, apparently JJ Abrams attempt to cause Black Friday accidents as we lazily sauntered around stores looking for deals. I was left with a feeling of “oh, neat, it’s all the things I expected”. There are Storm Troopers, the Millennium Falcon, X-Wings, and a Sith lord. There’s also a new light saber.

Around the web, people are freaking out about this new Light Saber. Some are making memes, while others are just plain annoyed. Many are pretty happy about the classic sword-style design of the futuristic weapon.

Here’s the thing: JJ Abrams planned this. This is just history rhyming. We had this same uproar when Darth Maul brought out his weapon of choice, which looked a lot more like a bo used in Martial Arts.

Some said “that’s not a light saber!” back then, while others said “man, that is AWESOME.” Either way, the saber was fitting. 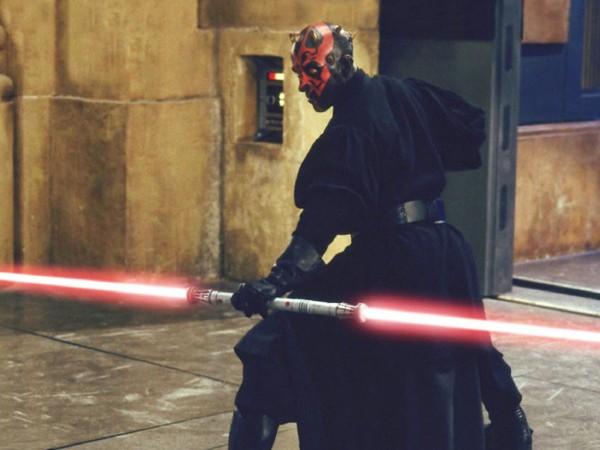 If we think about the styles of Sith lords carrying the respective weapons, things start making a little more sense. Maul was much more athletic, with some flips and other crafty kung fu-ish moves. The new Sith lord, whoever it is, will likely be a much more stand up/come-forward fighter. A traditional saber is among the first weapons made for combat, and finds itself dotted throughout military history. It’s also one of the more versatile swords ever made, finding a home with cavalry and lords alike.

The red light saber will probably perpetually change, now. It seems to be a kind of tradition at this point, and movie making technology can support just about anything a writer or director wants to do. It fits the character, almost more a part of who they are than the lines they utter.

So if the saber is indicative of the Sith Lord carrying it, look for a tactician versed in sword-play. That’s a bit scarier than Maul, who relied mainly on athletic skill. We’re still not sure what the new champion of the dark side is all about, but whoever it is already has a formidable weapon that’s a proven champion.