The challenge with working from the road for many people is that even with a laptop, often the screen is too small to be truly productive. A new portable display called the SPUD has landed on Kickstarter and this gizmo will make it a snap to carry a large screen with you for all your devices wherever you go. SPUD is a collapsible, pop-up projection screen measuring 24-inches diagonally.

The people behind SPUD say that the screen has high-resolution and collapses like a ruggedized umbrella to approximately the size and weight of a paperback book. The rear projector throws its image inside the SPUD collapsible enclosure and uses DLP technology. It can be connected to the computer or the device via an HDMI cable or a wireless adapter. That wireless adapter means it can be used with a smartphone or tablet and HDMI connects to laptops and other computers.

When collapsed down SPUD measures 5.64″ W x 2.17″ H x 7.52″ L and weighs less than two pounds. The screen itself is made from a material that has been crafted to reduce wrinkles for better performance. Brightness of the projector is adjustable for different use conditions from 350-785 nits. Native resolution is 1280 x 720.

The projector has an internal battery good for three hours of use at highest brightness and six hours at lowest brightness. The refresh rate is 120Hz and the projector has integrated stereo speakers. SPUD was seeking $33,000 and has raised over $193,000 with 43 days to go. A pledge of $374 or more will get you a SPUD with shipping estimated for June 2017. This might be just the ticket for people who travel a lot and work form a notebook computer. 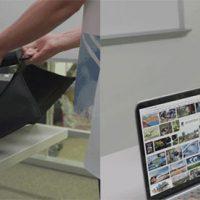 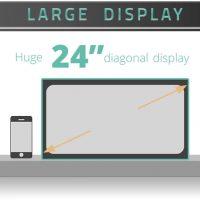 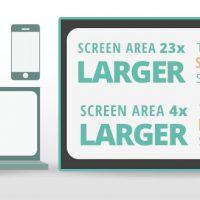 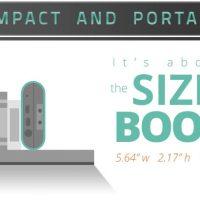 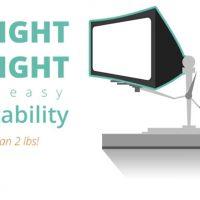