A company called SpeedKore has made some of the coolest and heavily customized cars we’ve ever seen over the years, and its recent offering may be the coolest yet. Its latest car is a 1968 Dodge Charger that has been completely revised, leaving little of the original car. What’s even cooler about this particular ride is that it’s featured in the new Fast & Furious film F9, being driven by none other than Dom Toretto.

Just because a stock doesn’t mean the car doesn’t have loads of power. The Hellcat V-8 is rated for 707 horsepower and 650 pound-foot torque from the factory. All that power goes to the rear wheels via a six-speed manual transaxle from a Lamborghini Gallardo. That manual transmission even keeps it slick gated shifter for the interior.

The fully customized suspension includes double A-arm front suspension with a double-wishbone set up for the rear. Shock absorbers are QA1 units design for handling at the racetrack. Since the car so big and beefy with so much power, its braking system has been upgraded using Brembo six-piston front and four-piston rear brakes. 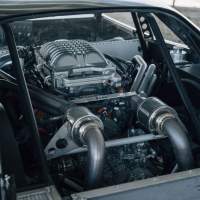 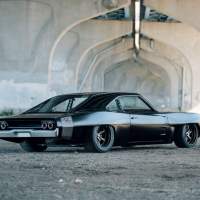 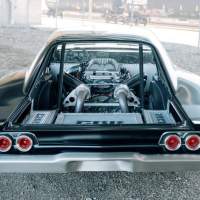 The builders also fitted the car with a drift brake and customized wheels. The custom wheels are from HRE and are called “Hellacious,” measuring 18×10.5 in the front and 18×12.5 in the rear, giving the car plenty of rubber for its power. Much of the car is highly customized, including a reshaped body created by Sean Smith Designs. While purists may hate that an iconic muscle car was completely changed for this creation, it’s hard to deny the appeal of a mid-engine Charger with a Hellcat V-8.