The military has been testing the use of off-the-shelf smartphones and tablets for a while. The idea is a smartphone like the iPhone or a tablet such as the iPad can be used to run specialized applications for military personnel that will allow them to get improved intelligence when they need it. A company called Special Operations Apps has announced an interesting new attachment for the iPhone and iPad to military-grade optics called the [SOA]2.

The system allows geo-tagging using the standard military grid reference system and frame stamped high-definition video recording. The video can be geo-located and is accurate within 7 m and the iPhone or iPad can be attached permanently or temporarily the high-end military optics, weapons, or other equipment. The company notes that its hardware and app isn’t specifically for the iPhone or the iPad. The company says it’s also excited about Windows phones, Android, the Lumia 9000, and the Nokia PureView. 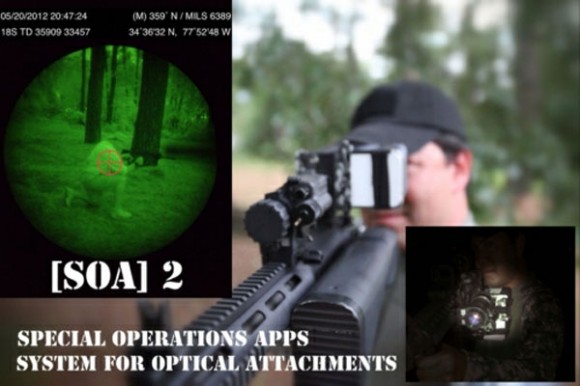 One of the coolest functions of the system is that the screen of the iPhone or iPad can display images using night-vision technology allowing a soldier to see in the dark and get information right on the screen of the device about target. The smartphone or tablet turns into a special heads up display offering better situational awareness and more viewability as well as offering the ability to record video for commanding officers. The [SOA]2 system includes a multiuse optics case integrator, adapter rings machined from a virtually unbreakable and lightweight material called Ultem 2300, Hoodman System Accessories, a proprietary software platform that has a range of special operations tactical navigation apps and more.

US Night Vision’s vice president of sales and marketing, Chris Byrd, said “With [SOA]2 and USNV Hardware, warfighters can use their smart devices as a calibrated, heads-up display for optics to improve situational awareness. No longer will they have to squint through a scope and close one eye — or be locked into goggles.”