An image surfaced today of a fingerprint-covered ginormous Sony phone, which is said to be the Xperia ZU, which was previously known as the Togari slate. The phablet has a huge 6.4-inch screen, which edges it about as close to tablet territory as a smartphone can get. To show the phone’s size in perspective, someone decided to photograph it with a kitten on (its) display.

This will be Sony’s first phablet, making it a bit extra-special. The name and images comes from sources who spoke with VR-ZONE. Although we don’t know yet what kind of price tag consumers should be expecting, nor when the device will be hitting shelves, it is being suggested that the phablet could be officially unveiled on June 25. We do have some reported specs on the handset, however, which are pretty awesome on paper. 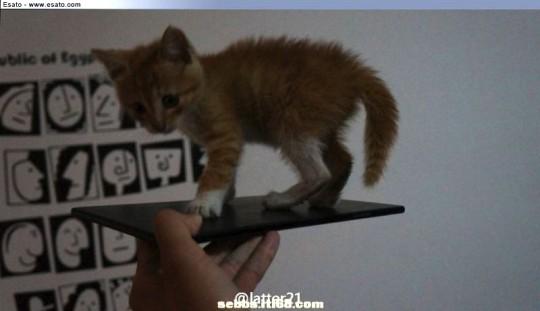 The Xperia ZU, also being called the Xperia Z Ultra, will have a full HD 1080p Triluminos display with Sony’s X-Reality technology, which analyzes videos and such for missing pixels and recreates them based on corresponding pixel data, resulting in sharper, better images. The display is also said to feature a new sensor, which will allow just about any object to serve as a stylus, even a pencil.

Getting under the hood, there’s said to be a Qualcomm Snapdragon 800 2.2GHz quad-core processor and graphics via an Adreno 330. One bit of disappoint is the rear camera, which doesn’t seem on par with the rest of the specs at a reported 8-megapixels (Exmor RS sensor), along with a 2.2-megapixel front camera. It is being said Sony has elected to use the 8-megapixel sensor over a larger 13-megapixel one due to shortages.

The Sony Xperia ZU/Z Ultra is said to be water resistant, as well, with a rating of IP55/IP58, which would be a step up from the water resistance rating of the Xperia Z. The handset is said to run Android Jelly Bean 4.2, and will measure in at 6.5mm think. Of course, none of this has been confirmed, but if the unveiling date is true, we won’t have to wait long for official specs.