Sony has announced a funding related update for those using the PlayStation Store on a PS3. Moving forward users will be able to add funds to their Sony Entertainment Network wallet using PayPal. Or more specifically, from PayPal and directly through the PlayStation Store. You see, in the past you have been able to use funds using PayPal, however prior to this update — that was done via the web interface.

Adding PayPal funds via the web and the more recent Mobile Billing option both remain available moving forward. That said, the process of adding through PayPal appears fairly straightforward. Those checking out from the PlayStation Store should look for the “Add Funds” option. From here select “PayPal” and then choose the amount you want to transfer over. 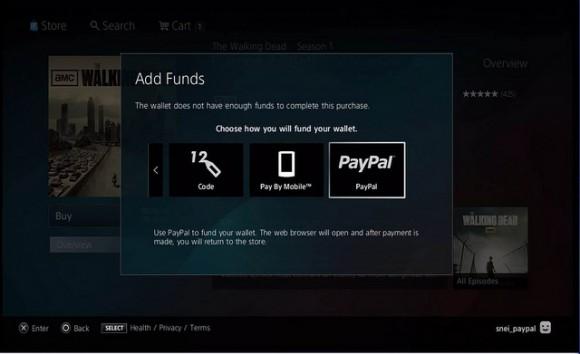 Dollar amounts range from $5 on the low end to $150 on the high-end. Once set with the dollar amount, confirm and the money will make the transfer. All said and done, this should be a good option for those looking to transfer directly from a PayPal attached bank account. More to the point, for those without a credit card.

Otherwise, as we move into November the launch of the PlayStation 4 feels like it has gotten that much closer. The actual console launch is on November 15th or 29th depending on where you happen to live. Sony also recently announced a release date for the iOS and Android apps. These are arriving for those in North America on November 13th and on November 22nd for those in Europe.

The mobile app will allow users to access their profile screens and also communicate with others. The app will offer access yo your friends list which means the ability to send and receive messages as well as compare trophy cases and more.