When I was a teenager, my morning routine consisted of a panicked, headlong rush down the ice-covered dirt roads that separated my rural ancestral home from the gravel parking lot at my high school. My steed of choice in those days was a decade-old Ford pickup, whose four-speed manual gearbox and 70/30 weight distribution ensured that I spent most of my commute completely sideways with the tachometer (aftermarket and strapped to the steering column, of course) pegged in the red.

Needless to say, the day I spent at Porsche‘s Camp4 winter driving school had me flashing back hardcore to those traction-challenged adolescent moments – only this time, instead of piloting two tons of utility-focused Detroit iron, I was behind the wheel of a $100,000 German sports car. 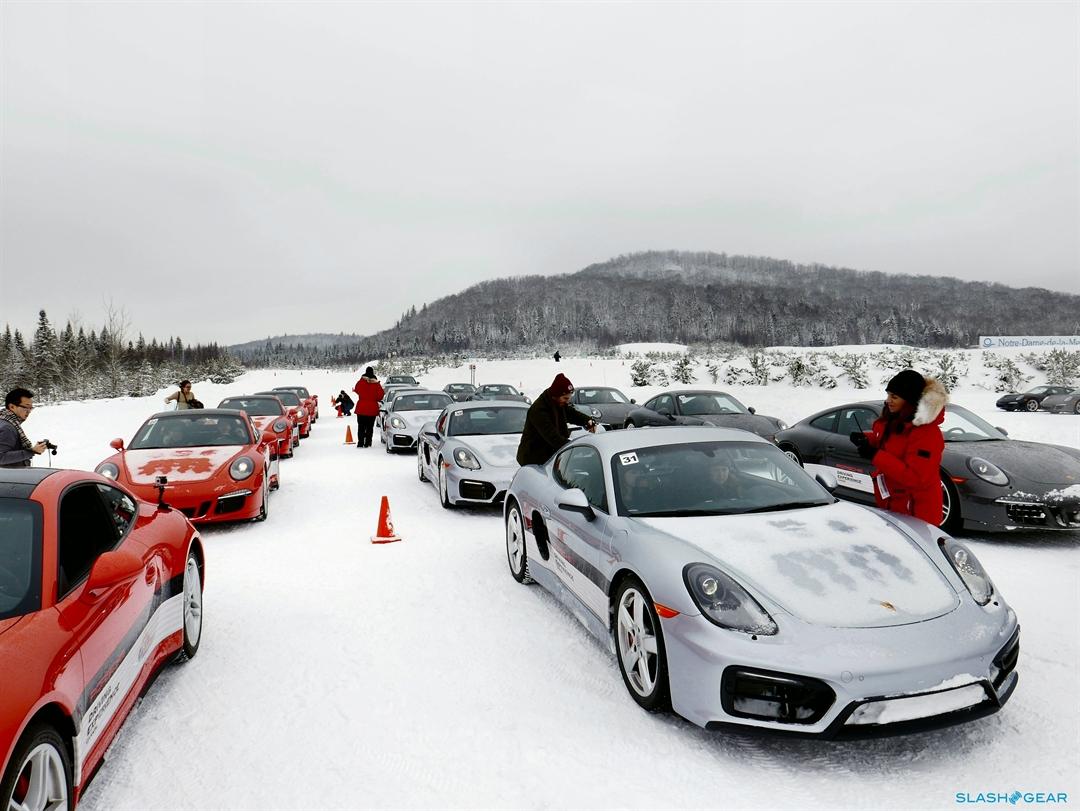 A trio of Teutonic sleds, in fact, had been arrayed before me by the Porsche Driving Experience team of professional instructors at the Mecaglisse rally facility in the Laurentian mountains of Quebec, Canada. I was here for two reasons: to explore what happens when you push world class sports cars past the limits of traction, and to capture it all on film using the latest cold-weather GoPro Re-Fuel battery pack from Digipower.

Corner any driving pro at a party and ask them about their passion and it’s not long before you hear terms like ‘friction circle,’ ‘oversteer,’ and ‘weight transfer’ get thrown around as you’re drawn deeper and deeper into the physics that govern everything that happens where the rubber meets the road. 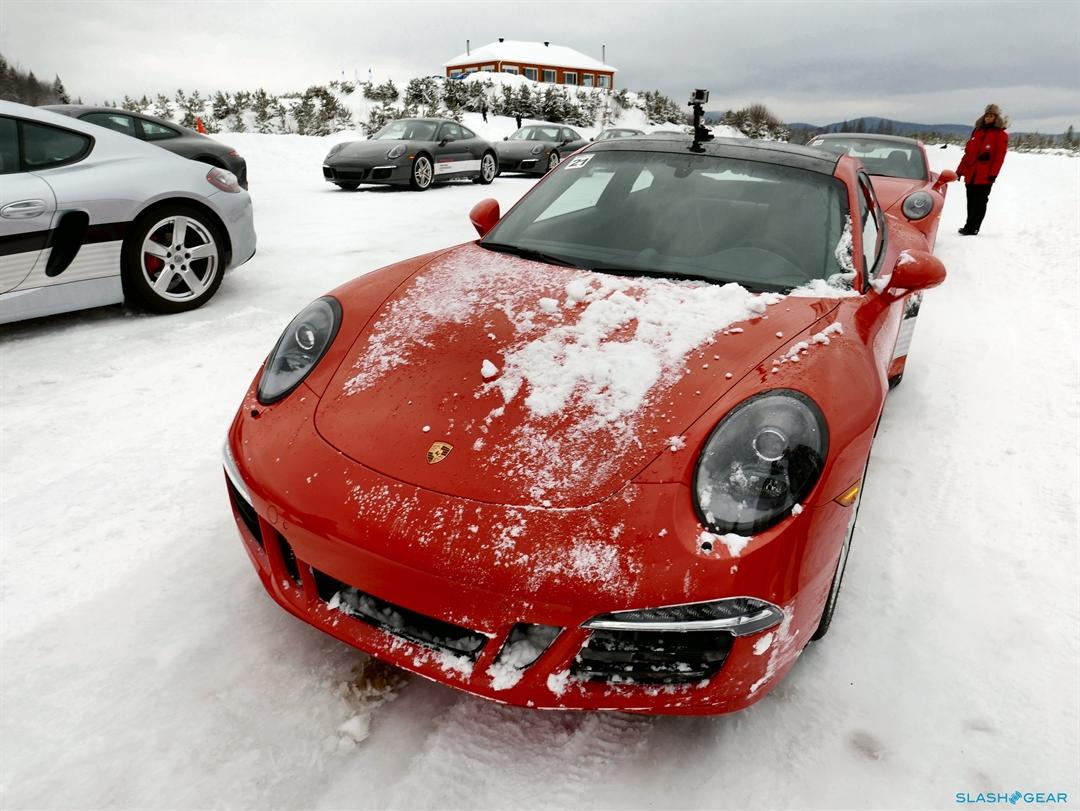 Normally, the speeds required for a full demonstration of these crucial concepts on a race course are a little too high for the comfort level of most performance car owners, but that all changes once you introduce ice into the equation. By dramatically reducing the amount of traction available, it’s possible to lose and recover control of any vehicle while traveling at a much safe velocity.

This explains why each of the three separate tracks built at Mecaglisse had been carefully coated with a thick coating of frozen water in anticipation of our arrival – and why all of the Porsches waiting for us on the starting grid were wearing Nokian winter tires outfitted with metal studs designed to help claw the cars forward. 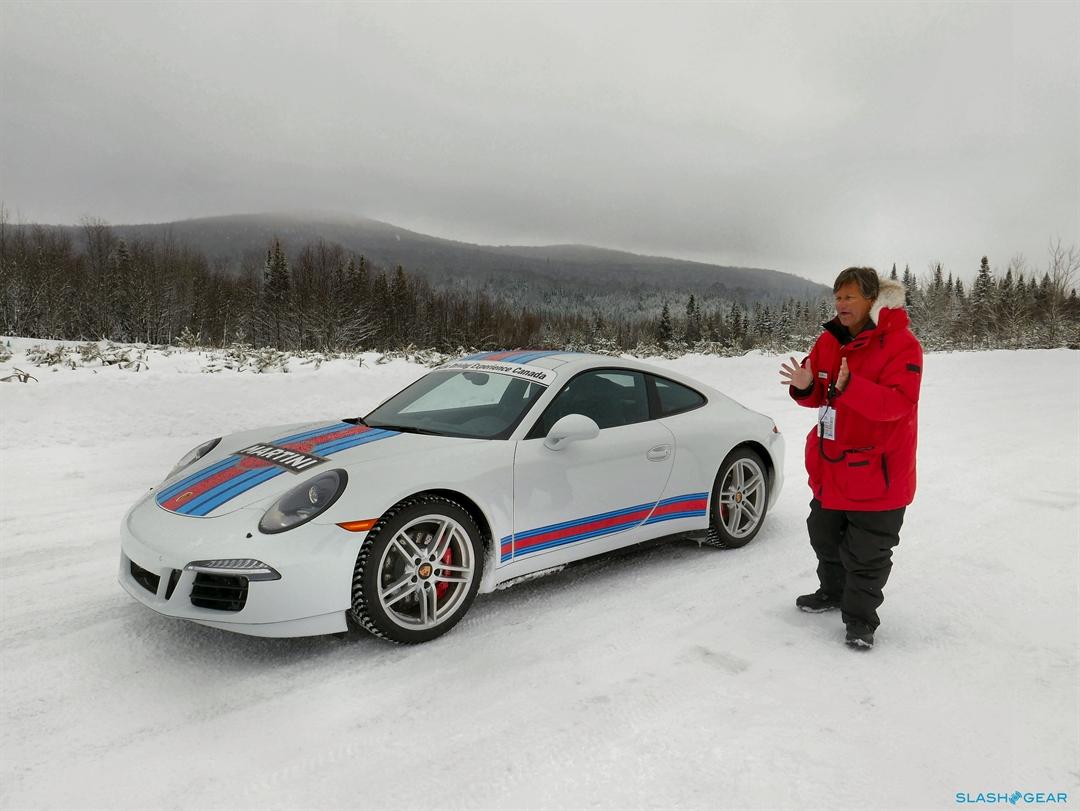 After a morning briefing that explained the basic concepts that were to be illustrated in motion out on Mecaglisse’s ultra-slippery surfaces, our group was herded out into the snow. Porsche runs a series of Camp4 schools every year, but for the benefit of the journalists who had been gathered on this chill January morning the program had been compressed into a single day. 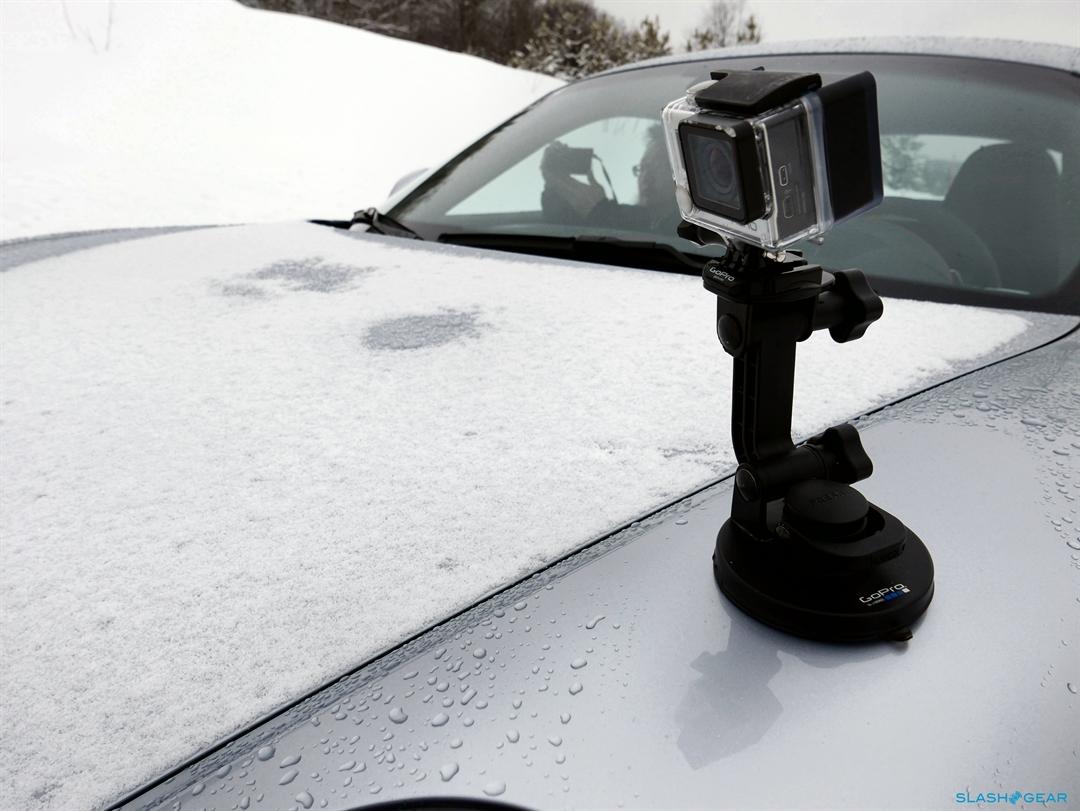 Before getting into the first car of the day – a silver Porsche Cayman GTS – I affixed my GoPro Hero3+ to the fender using a suction cup mount. The Re-Fuel pack attaches to the camera housing by snapping onto the rear door hinge and adding just over an inch to the profile of your camera, which could be a problem for anyone needing to fit their GoPro in a tight space.

More crucial is the extra weight that comes with the battery, an issue that would crop up in the editing suite in a most unpleasant way. 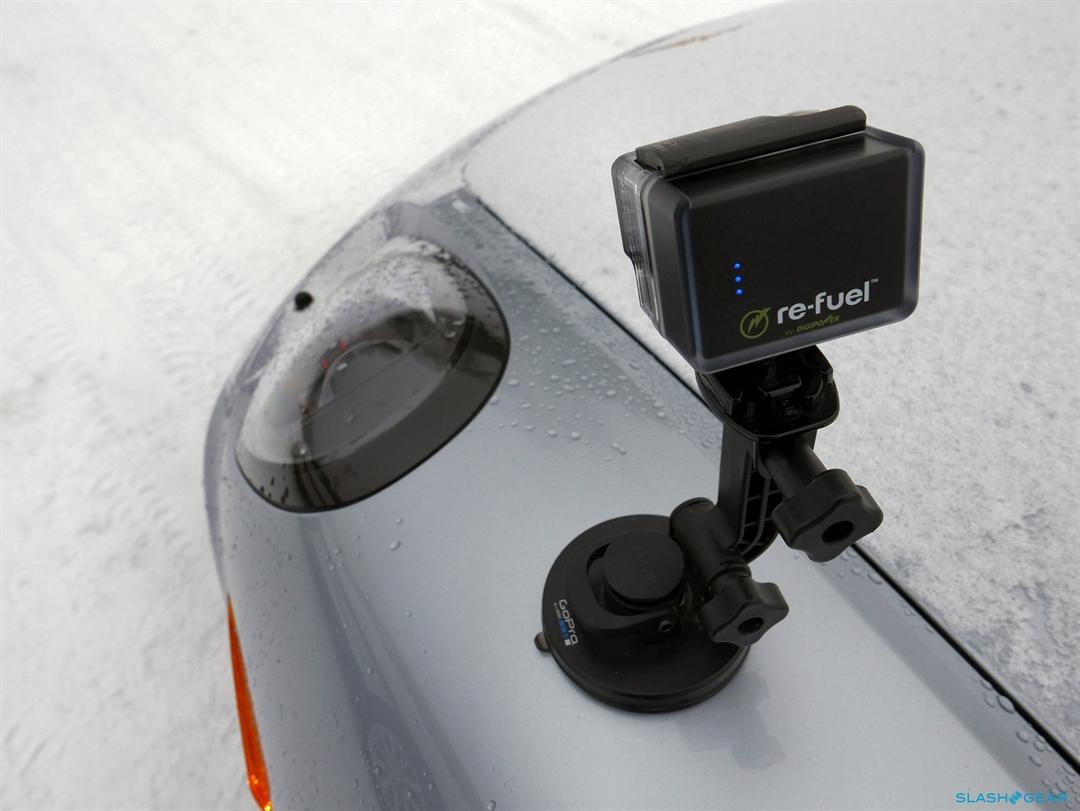 Digipower promises an extra 6 hours of life from the $49.99 battery I tested (with 12-hour and even 24-hour versions also available), and more intriguingly, the company claims that in cold temperatures the Re-Fuel unit is still 88 percent effective. This is an important detail given how sensitive most batteries are to conking out once the mercury drops.

Since the thermometer at Camp4 was hovering right around the freezing mark with no real sunlight shining through the clouds, I had the perfect conditions to test out how effective Digipower’s cold protection really was. I elected to leave my GoPro camera switched on with the power-sucking Wi-Fi feature activated for the entire day, and to bring it inside only for a short stint during lunch to fully expose it to the winter environment. 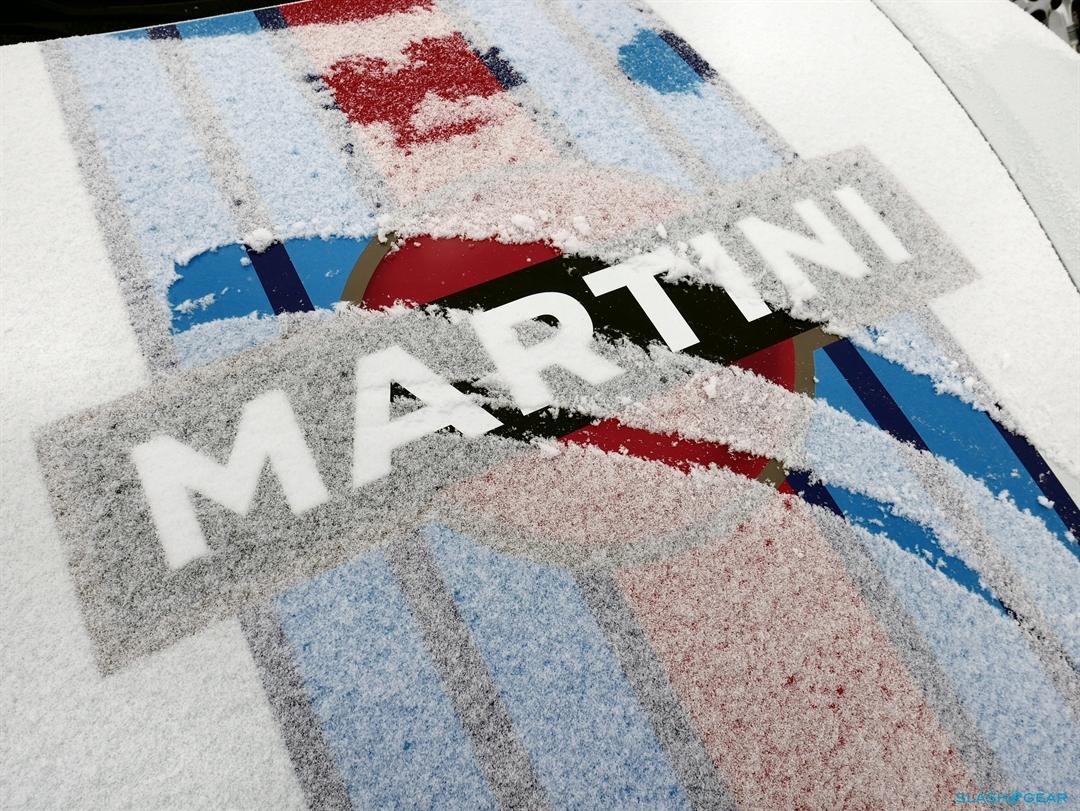 I should come clean right from the beginning: the Cayman GTS is my favorite model in Porsche’s entire line-up. I’m in love with the outstanding balance that comes from placing the engine as close to the centerline of the vehicle as possible, a character trait that was on full display at Camp4 as the car obediently opted out of any slides or drifts that I initiated as soon as I removed my throttle or steering wheel inputs.

This was in startling contrast to the tail-heavy Carrera GTS, which took whatever momentum I threw its way and ran with it until it encountered either a snowbank or a healthy dollop of counter-steer. The Carrera 4 GTS, with its all-wheel drive system, acted in much the same manner but provided me with the option of scrambling back into a straight line by way of the insistent tug of its front paws. 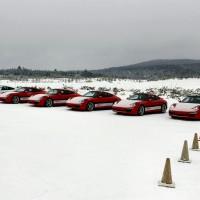 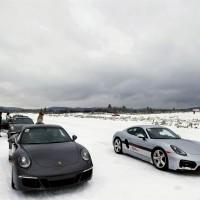 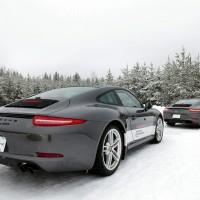 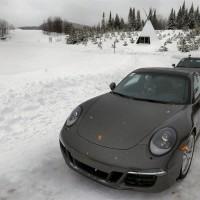 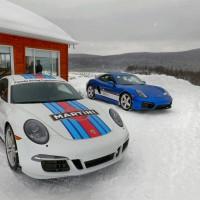 Porsche’s Camp4 school is an excellent method to hone your winter driving skills to be sure, yet it’s also useful for learning car control techniques that you can export to dry and wet pavement with only minimal adjustments. Not everyone spent their younger days digging pickups out of ditches due to an overdose of pre-scholastic exuberance, and Camp4 offers a very safe playground on which to discover just how far you can push before you end up stepping over the line.

As for the Digipower Re-Fuel battery pack? The end results were more mixed. I was impressed by the fact that the unit kept my GoPro powered up for the entire five and a half hours of driving, with much of that recorded at 720p / 60 fps – a period of time that matched up almost perfectly with the promised 88 percent utility in cold temperatures. 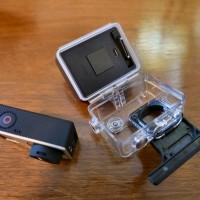 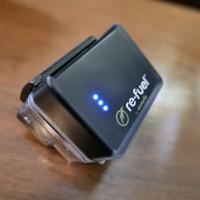 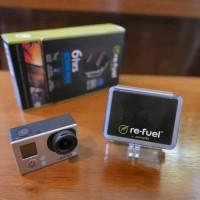 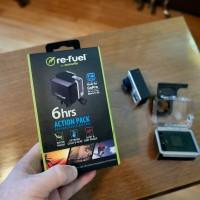 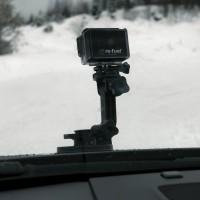 Once I had transferred the footage to my computer at home, however, I was disappointed to discover that the audio was almost completely unusable. I had been concerned that the extra weight of the battery might cause the camera to pivot on its mount at higher speeds, but in actuality the bumpy ice caused the pack to rattle up against the camera whenever the vehicle I was driving was in motion.

The seal of the rear case door was perfect – no snow found its way inside the housing – but the battery movement inside the case created a rapid-fire clicking noise that was completely unacceptable.

Is there a way to mitigate this unfortunate shortcoming of the otherwise effective Digipower battery? Possibly – the pack has a small foam tab intended to cushion it against the camera, and if one were to add a bit more padding it may be enough to hold the camera in place. Another solution would be to use the skeleton housing and an external microphone, but that might only attenuate the extra noise (at the expense of weatherproofing, too).

Digipower has effectively solved one problem but created another, which makes it hard to recommend the battery without first exploring an audio workaround.

If you’d rather see the Porsche doing its snow thing without the frustrating clicking, here’s a version with a less-frustrating soundtrack: