Snips “Intelligent Memory” AI promises to be private and smart

Today, artificial intelligence is seen as a double-edged sword. On the one hand, it represents a bright future of possibilities the likes of Star Trek have painted on television for years. On the other hand, it also summons fears of robotic overlords hell bent on eradicating inefficient humans. But at its very core, AI is supposed to help relieve humans of mundane and repetitive tasks. Snips, a young Paris-based startup, believes in that kind of AI vision, and it is starting somewhat from the ground up with an iOS app that focuses on the first, and most important, foundation of artificial intelligence: memory.

There is a programmatic and almost predestined aspect to how computers and programs “remember” data. Our organic brains, in contrast, store information all over the place, forming links between pieces of data as knowledge grows. This kind of memory is the one that Snips has decided to focus on as its first AI product.

Dubbing it “Intelligent Memory”, the app is more like a highly intelligent record keeper than a proactive secretary. It connects data found in the apps you give it access too and forms your own personal knowledge graph. It scans email, calendars, address books, and surface important and timely information based on those. On the first few runs, Snips will naturally be a little handicapped, but, over time, it will find out more and more about you and offer better suggestions and reminders.

Of course, we’ve heard all of those promises before, but here’s one thing that admittedly sets Snips apart from the, perhaps more advanced, competition. Snips boasts that is technology is private by design. Whereas the likes of Siri and Google Now routinely connect to remote servers not only to get data but to “phone home”, Snips keeps everything local on your device. It grows as you give it more information, through those emails and appointments, and not through how a remote server analyzes your data. As proof of its commitment to privacy, it even hired Javier Aguera, the founder of the privacy-focused but not so successful Blackphone. 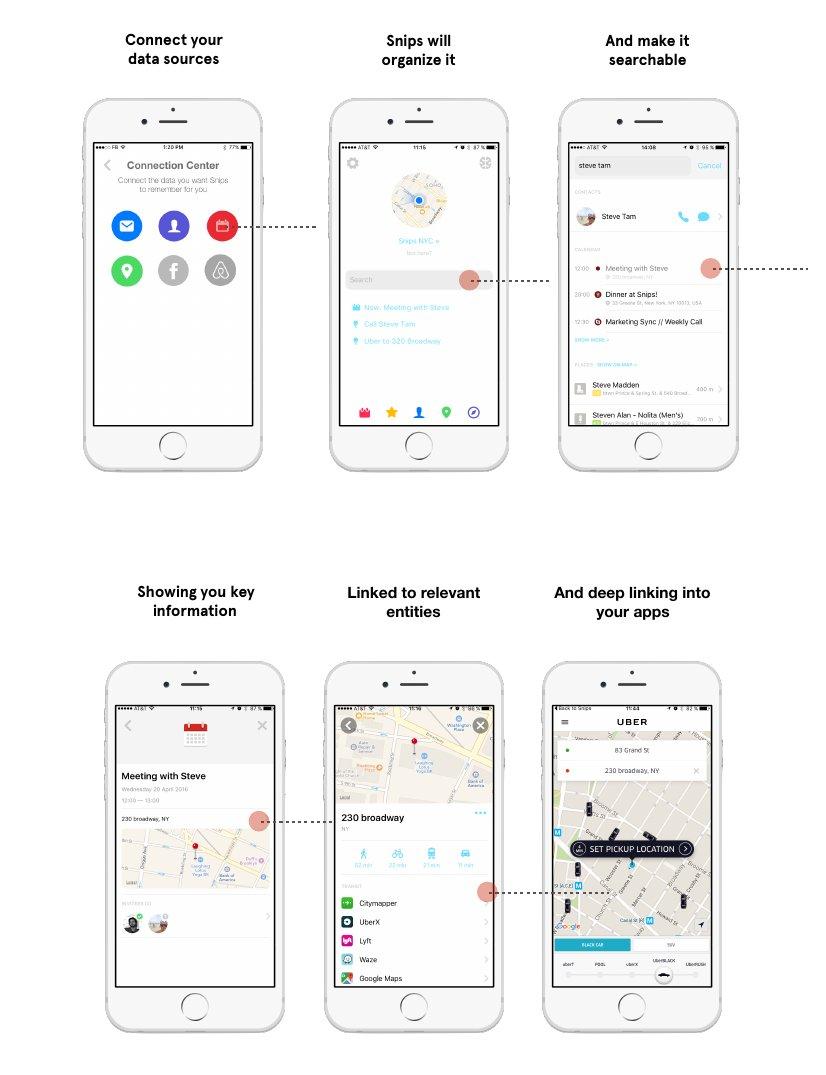 Intelligent Memory, the first mobile app to come from the startup, is rather basic at its core. It can only analyze what you give it access to and nothing more. But the data sources it pools from is also quite limited at this point. For e-mail, only Gmail is supported at the moment. You can tie your iOS calendar and address book to the app, and let it use the iPhone’s motion sensors or tell it your Home and Work locations. That’s pretty much it for now, however, though there are still some slots to add though. An Android version is also in the works, though Snips hasn’t revealed yet when that will launch.

You might find “Intelligent Memory” to be a bit underwhelming compared to less privacy conscious personal assistants, but that’s OK. Snips admits that it is just the first baby step, the necessary cornerstone for future AI apps. Its next project will be to apply Natural Language Processing to make it easier and more natural to give commands or search for information stored in that Intelligent Memory.