It sounds unbelievable, both because it feels too young and at the same time too old, but Skype‘s video calling service launched for free. At least that is what the company, now owned by Microsoft, is celebrating. And to commemorate that tenth anniversary, Skype is announcing that it will be launching something new soon. Well, not exactly new but new for mobile at least. Group video calling, which has been possible on the desktop version of Skpe, will soon be available on Android, iOS, and even Windows Phone. And it will all be available for free too.

Skype can probably really boasts about how it changed the communication landscape. At a time when VoIP was something only hardcore computer geeks would know about, Skype connected people from all over the world not just through voice calls over the Internet but, more importantly, video chat. It made the world an even smaller place by putting your friend’s or family member’s face right in front of you and in real time.

But one on one video chats are yesterday’s news. Tech savvy people, especially those in the office, are all about group video calls now. What was once just the domain of hi tech businesses, with their video conferences and meetings, group video chat has become a convenient way for friends and families to share the same moment together and at the same time, even when timezones apart.

Skype is going to try to break into that more social and more fun-oriented market by breaking from the tethers of the desktop or even a laptop. Soon anyone and everyone can chat face to face with not just one friend but with a whole group. And they won’t have to worry about monthly charges other than their own data plan. In other words, free!

Skype isn’t saying when it will roll out the feature other than “in the coming weeks”. Those who want to get in early, however, can try their luck and register for a preview. 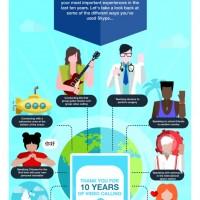