We’ve all been there; you’re in an area that might be a bit “sketchy”, and make a mental note not to come back, at least at the time of day you were there. You might let a few friends know, too, but what if you could tell everyone? A controversial new app aims to let you do just that.

SketchFactor, launched today, is  currently available only for iPhone. The idea is to let you rate places you may have been on a scale of one to five, based on “sketchiness”. In a quick jaunt through the app, it seems a bit more whiny than alerting.

I live in Portland, OR — a town known for weird, and bicyclists. Most of the alerts I found in Portland had to do with both. A bicyclists claims a driver was upset she wasn’t “sharing the road” (perhaps a valid complaint on the drivers’ part), which already brings up an interesting question we’ll get to in a minute. Some others were valid, like a guy walking up to a car and trying to stick his hand inside to turn the ignition off. That’s something out of character for people, not a reaction to your habits. 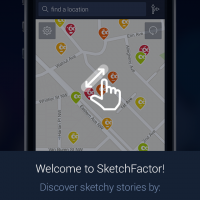 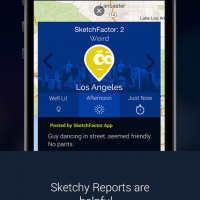 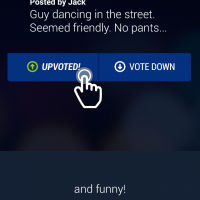 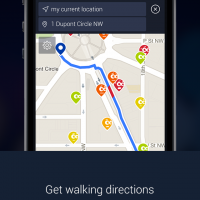 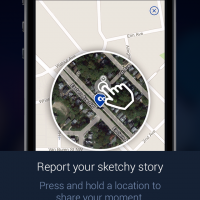 The question I’m left with in checking SketchFactor out is what constitutes a sketchy area, and where do you draw the line between that and a sketchy incident? Most of the alerts in my area have to do with people acting terribly in situations. Case in point: a woman operating as security during the “World Naked Bike Ride” (yeah, that’s a thing) said some guy yelled at her to take her clothes off. Is that a sketchy area, or some guy making a poor judgement call in an already sketchy situation?

According to the app description, SketchFactor is “a crowdsourced navigation app that shows the relative sketchiness of an area”. I can’t say that’s necessarily occurring in Portland just yet. There aren’t a lot of alerts, so SketchFactor — for me — is just people complaining about their day into the void of an app. I don’t consider a lot of what’s being reported as “the relative sketchiness” of the area.

Still, SketchFactor has promise. If one particular stretch of road had some overzealous cops ticketing for speeding, that might be something you’d want to know about. If there have been a string of robberies in a neighborhood I live in, I’d like to make sure to tuck my valuables away neatly. Planning a route (which can be done in the app) can be especially helpful, especially in a neighborhood you’re unfamiliar with. 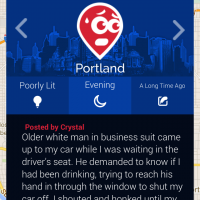 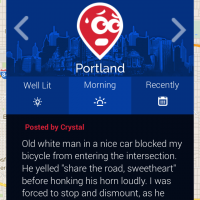 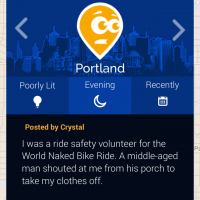 Someone not liking how you ride your bike? That’s not really helpful, and makes SketchFactor feel more like a location-based Secret or Whisper than an app that can actually help users out.

You can vote posts down, but it’s not clear just how many it would take before a post is taken away or downgraded. Reporting a “Sketch” is as simple as leaving a review on Yelp. Navigating the map of reported incidents is equally simple, so SketchFactor is easy to use. It’s got that going for it.

It will take some time before it has a lasting effect, but early returns suggest it needs people to report actual issues, not incidents that annoyed them.