Google Glass might be DOA by now, but the dream of smartglasses live on, but with less ambitious goals in mind. Instead of a one size fits all product, most of these newer attempts try to focus on specific markets and specific use cases. One of the latest to announce their own smart spectacle is Six15 Technologies. One thing that sets its apart and could make it successful is that its INFINITY.1 smartglass won’t make you look like a cyborg and looks just like some thick rimmed geek’s eyewear.

One of the biggest complaints about the Google Glass, and smartglasses in general, is how they look. Very few would want to be caught dead wearing those. While some have indeed tried to refine the design, they still look obvious, which may actually be a good thing for the sake of privacy and security.

Six15’s INFINITY.1 looks the least assuming of them all. It really look more like a regular eyepiece, albeit with a rather thick frame. The only giveaway that it’s not your regular eyeglasses is the slight protrusion on the right side for the camera. Six15 was able to perform this miracle with its patented mini LCD system that affords a 17.5 degree field of view. 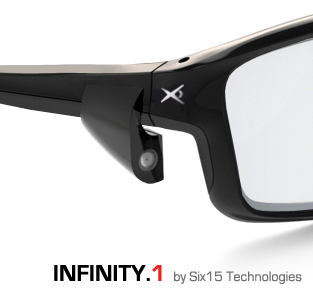 But the company isn’t selling a ready made consumer device, unlike what Google Glass hoped to be. It is selling, instead, a platform and a base device that their customers can then customize for specific needs, adding modules for video, audio, and communications, for example. It doesn’t exactly say if its INFINITY platform is based off any existing smart eyewear OS, though it does mention that it was developed together with Augmate, who develops its own Wearable Environment (WE) platform.

As mentioned, the INFINITY.1 glasses and the INFINITY platform are more targeted at Six15’s non-consumer strategic partners that include first responders and industrial businesses. The two products are already available but Six15 looks to expand available versions by first quarter next year.