Sharp RoBoHoN is a robot with smartphone functions that can walk

People like smartphones and they like robots so Sharp figured it would combine the two to create a strange device called the RoBoHoN. The device is a mobile phone robot that was created jointly with Tomotaka Takahashi’s robot creators. The robot is able to walk on two legs and is dubbed the “next generation of mobile information communication terminal.”

The bot has integrated LTE/3G supporting voice calls, email, and a camera. It’s like a very basic mobile phone with the ability to walk around. The robot also has an integrated projector that allows it to project photos, video, maps, and other content on the surface of a desk or on a wall.

RoBoHoN has a Snapdragon 400 chip inside which is a quad-core unit operating at 1.2GHz. A 2-inch touchscreen is integrated into the rear of the device with QVGA resolution for controlling the robot features. Users can also control the functionality of the bot via voice control.

The robot is 19.5cm tall and weighs in at 390 grams. Sharp figures that the size makes the robot easy to carry with you on the go. When seen in the hand in the video below the bot looks rather large and clunky to take with you. 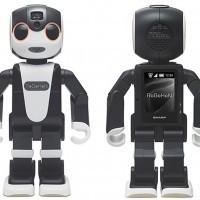 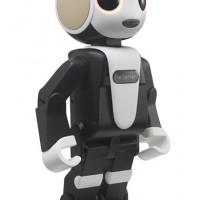 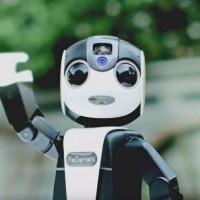