Researchers led by a team of scientists from the Los Cumbres Observatory have gathered what they call the first convincing evidence for a new type of stellar explosion. The new type of stellar explosion is called an electron-capture supernova. This particular type of supernova has been theorized for more than four decades, but examples in the real world have been difficult to find.

Electron-capture supernovae are believed to come from explosions of massive super-asymptotic giant branch stars. The discovery also adds new evidence to the mystery surrounding a supernova seen worldwide in the daytime in AD 1054 that eventually became the Crab Nebula. There are two main supernova types: a thermal nuclear supernova, which is the explosion of a white dwarf star after the star gains matter in a binary system.

The other main supernova type is an iron core-collapse supernova, where a massive star that’s more than ten times the sun’s mass consumes all of its nuclear fuel, and the iron core collapses. That collapse creates a black hole or neutron star. The new electron-capture supernovae is described as riding the borderline between those two main types of supernovae. 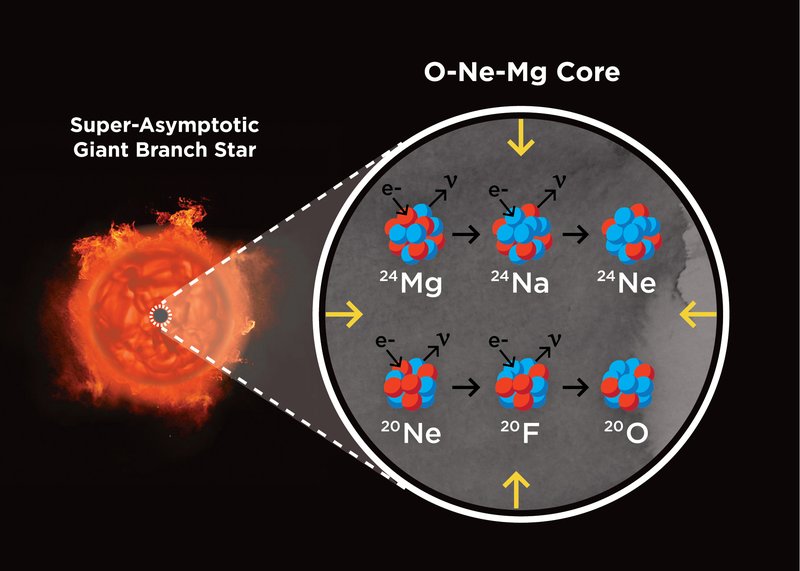 An electron-capture supernova happens when the stars stop fusion when the core consists of oxygen, neon, and magnesium. The stars aren’t massive enough to create iron. In this type of supernova, some of the electrons in the oxygen, neon, and magnesium core are smashed into their atomic nuclei in a process called electron capture. The removal of electrons causes the core of the start to buckle under its own weight and collapse, which results in an electron-capture supernova.

Scientists say if stars experiencing this type of supernova were slightly heavier, core elements would be fused to create heavier elements helping to extend its life. The stars aren’t light enough to escape a core collapse or heavy enough to prolong their life and die later via other means. In the latest research, the team found that supernova SN 2018zd had unusual characteristics, some of which were seen for the first time in a supernova. It was later explained by the electron-capture scenario.