Most people all around the world know that an asteroid strike on the Earth is what killed off the dinosaurs. Scientists have been studying the crater left in Mexico for many years now trying to wrap their brains around what the colossal forces created by that impact were like. We know that it caused a mass extinction event that nearly killed all life on the planet.

It’s hard to imagine what an impact of this level would have been like, but the team has studied new granite core samples from the impact site and has new insight on just how incredible the impact forces were. At one stage of the impact crater formation the team says that a mountain higher than Mt. Everest was created, but it collapsed back into a smaller range of peaks.

The truly insane part about this rapid formation of a mountain that tall is that it happened in a scale of minutes according to the team. The team says that the debris thrown into the atmosphere would have seen the skies darken and the climate around the globe cool for months or years after impact. That cooling would have helped drive many species to extinction, not just the dinosaurs.

This time out the team drilled from May to June of this year removing core samples form what is called the Chicxulub Crater that is buried under sediment in the ocean off the Yucatan Peninsula in Mexico. The pink granite core samples retrieved were noticeably abnormal according to the team and even when held in the hand scientists could see that evidence of enormous stress from the impact was present. 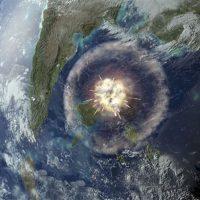 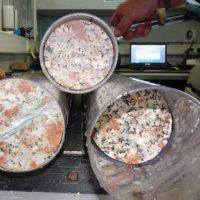 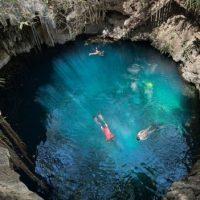 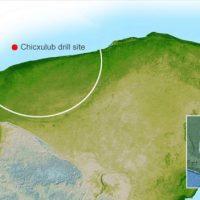 The asteroid that caused the drama was 15 km wide and it dug a hole in the Earth’s crust 100 km across and 30 km deep. The bowl of the crater eventually collapsed leaving a crater 200km across and a few km deep. Much of the offshore crater is buried under sediment in the ocean that is 600m deep. On land the crater is covered by limestone deposits but its outline is evident and marked by the ark of sinkholes in Mexico called cenotes.