Apple announced the new iPhone 12 smartphone lineup this week, taking the wraps off its latest flagship, its Pro variant, and all of the new features users can expect. Consumers were quick to latch on to one point, however, which is that Apple isn’t including a charging brick (USB wall charger) with the latest lineup. Samsung, as you may have expected, took the opportunity to jab at Apple over this decision.

Apple’s latest and greater iPhone lineup continues to use the company’s proprietary Lightning cable rather than switching to the universal USB-C — the same one found on its iPad Pro and MacBook models. The company does include a Lightning charging cable with the iPhone 12, but consumers have pointed out that the included cable is Lightning to USB-C…and most consumers are still using older USB-A charging blocks. 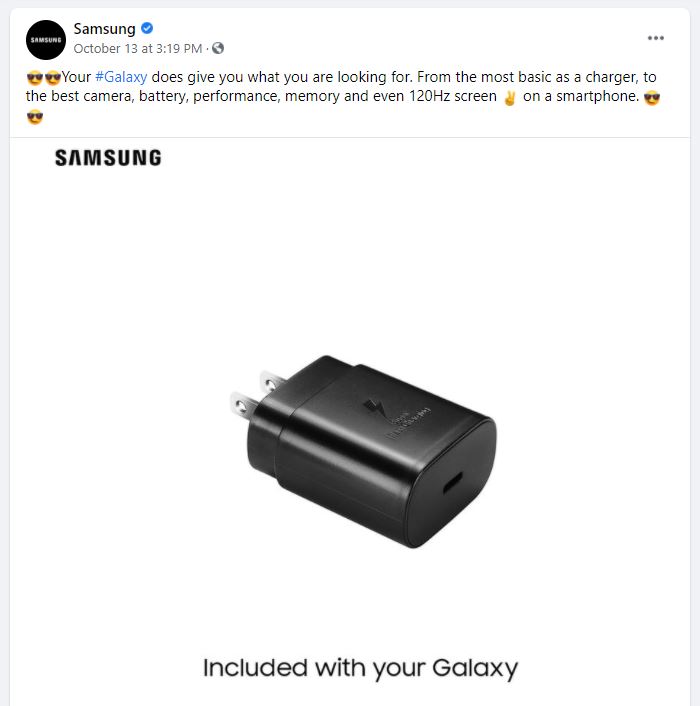 Apple’s reasoning behind the missing charging block is that many consumers already own chargers and that by leaving out the charging block, the company can reduce wastefulness. Critics have argued against this point, however, claiming that because many consumers don’t yet have a USB-C wall charger at home, they’ll be forced to buy the charger separately on top of the iPhone 12 itself.

All of this assumes, of course, that buyers don’t already have a Lightning-to-USB-A cable and charging block at home, which is no doubt the case for anyone who has used any Apple mobile device in the recent past. That hasn’t stopped Samsung from stepping in to capitalize on the squabble with a bit of self-promotion, however.

In a Facebook post, Samsung shared an image of its USB-C charging block and noted that it is included with the latest and greatest Galaxy smartphones like the Note 10. The company doesn’t mention Apple or the iPhone in its post at all, but it’s clear what prompted the post.