Samsung Galaxy S7 could have Always On screen

This latest speculation is both technologically possible but might also be a bit too much, both in its goal and Samsung‘s legal action. In South Korea at least, it has tried to obtain the trademark for “Always On Display”, a phrase that has already been used quite a lot in the tech industry, from ebook readers, to smartwatches and even to some smartphones. If so, what is Samsung’s purpose for an almost unreasonable claim? With the unveiling of the Galaxy S7 nearing, it could very well be a feature that the Samsung flagship will advertise greatly,

As mentioned, always on display are nothing new but rare as far as smartphones go. It is usually found in the realm of ebook readers with their e-paper displays or EPD that don’t consume power when displaying something static, like a page of a book. Some mobile devices, like Pebble‘s smartwatches and Yota’s dual-screen YotaPhones, employ that same technology to have a energy-efficient display.

That said, Samsung does have the technology to pull this off on a regular smartphone screen, and, if you’re using one of its flagship devices, you already have it in your hands. In contrast to LCD screens, OLED displays emit their own light. To show the color black, it simply needs to turn that light off, without actually turning off the display. On LCD’s, black still requires the backlight to be on, draining power in the process. This is the very same technology that has made Samsung’s own Ultra Power Saving Mode possible.

Now it would seam that the manufacturer plans on making that more or less a staple even in normal operations. The likes of Motorola, LG, and Nokia have already demonstrated how an always on screen could be used, like persistently displaying notifications or a screen that can respond to knocks and gestures even when seemingly turned off.

That’s not to say there will be no battery penalty. In theory, it only incurs a drain of 1% for every hour. Of course, that depends on actual usage and it can end up even more depending on what happens in the background even when the smartphone is not in active use. It will probably worry some, especially with Samsung’s non-removable batteries, though the Galaxy S7 is expected to have an even larger one than its predecessor. 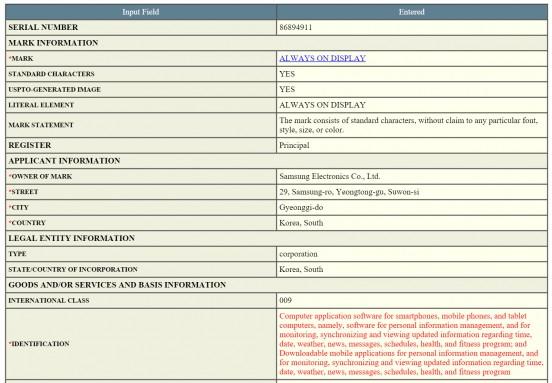 Even if the feature does make it to the Galaxy S7, Samsung might find itself on the losing end when it comes to legally acquiring the trademark, considering how common it is. Samsung is expected to finally reveal the Galaxy S7, and possibly the Galaxy S7 edge, in little less than two weeks, on 21st February, right on the eve of MWC 2016.

Thanks for the tip, Michel!