Rolls-Royce has once again given the public a look at its autonomous naval vessel concept, this time dropping some details on what the ship may be capable of, as well as details about its potential uses. The vessel, per Rolls-Royce, has a range of 3,500 nautical miles (4,028 miles) and will be able to spend more than 100 days out in operation on the water.

Rolls-Royce shared a pair of images of the naval vessel concept, though neither are high-resolution. This joins the ship control center concept the company revealed last summer — it includes a lot of shiny surfaces and touch displays. You can see a concept demonstration of it in action via the video below.

According to Rolls-Royce, this upcoming autonomous naval vessel will have a top speed somewhere above 25 knots (29MPH) and will measure 60m / 200ft length. Who would use such a vessel? Rolls-Royce says it can be used for surveillance and/or patrolling, fleet screening, mine detection, or other single-role missions. The US Navy has been working on a similar ship of its own.

Rolls-Royce’s Benjamin Thorp explained, “Rolls-Royce is seeing interest from major navies in autonomous, rather than remote controlled, ships … Over the next 10 years or so, Rolls-Royce expects to see the introduction of medium sized unmanned platforms, particularly in leading navies, as the concept of mixed manned and unmanned fleets develops.” 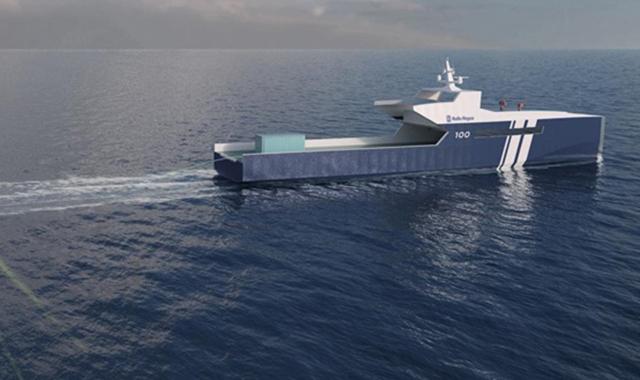 For now at least, Rolls-Royce envisions its autonomous ship with a fully electric propulsion system, something that would need less auxiliary systems like lubrication. Solar panels could be fitted onto the ship to provide energy for the times it is in standby, and there would obviously be energy-storage hardware on the vessel. The ship will also be packed with technology that enables it to operate in the absence of a crew.