These days, speech recognition is a lot about Siri versus Google Now versus Cortana, but that is definitely not the only use case for the technology. We often take for granted what we are able to use our smartphones for because we are physically capable of handling them. Luckily, there are those like RogerVoice who are taking up the banner for others, especially those with hearing problems who still want to use their phones for what they are originally intended to be used for: making calls.

OK, maybe our smartphones and our use of them have evolved beyond simple phone calls or even text messages, but there is still a segment of users who rely on phone calls, either for technical or for social reasons. There are also some cases when the spoken word is more powerful and poignant than textspeak. And some just really want a good old-fashioned talk, especially with family members. Unfortunately, that keeps some people, especially deaf and the hard-of-hearing out of the loop. 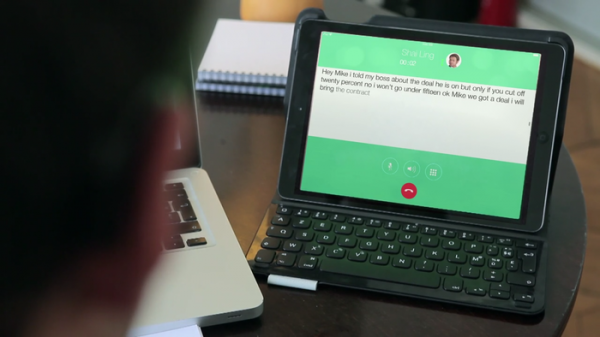 RogerVoice gives that power back to these people using a seemingly magic and common sense feature: transcribing the spoken word into text. Users on both sides of the phone call will use an app to establish the connection. One side can speak and listen normally while the other side will be able to read it as plain text. They can, of course, answer back verbally, using the phone’s microphone or a headset.

It isn’t all magic, however. Aside from an app, RogerVoice also uses a VoIP platform to do the brunt of transcribing the phone call. As it is VoIP, you don’t need any special carrier feature and only need a stable Internet connection. RogerVoice promises that your calls are all private and confidential as there are no human intermediaries, but the presence of a centralized server might be a cause of worry for some. RogerVoice can also transcribe speech in many major languages such as English, Spanish, Portuguese, French, Italian, German, Greek, and Japanese, but it doesn’t do translations.

Currently, RogerVoice is still at a Kickstarter stage, where funding will be used to build up that VoIP platform and design the interface of the app. It has gone beyond its $20,000 target but if it reaches $40,000, an iOS app will also be developed in addition to the original Android plan. While that app may come out as a free offering, the VoIP service isn’t and will be akin to a carrier subscription, though no pricing details have been revealed yet.