A robotic hand developed by researchers from Japan isn’t out to make a better prosthetic or perform some sort of hard labor. This robot hand is designed to play rock, paper, scissors and it always wins. Always as in 100% of the time and it is able to win by cheating and it is intended to highlight the potential of the human-machine interface of tomorrow not highlight the trustworthiness of robots.

To win at rock, paper, scissors the robotic hand uses a high-speed camera and reflexes that best those of a human to identify the oncoming shape of the opponents hand and provide the correct move to beat the opponent. The angle of the wrist and movement of the fingers is enough to give away what move the human has planned. 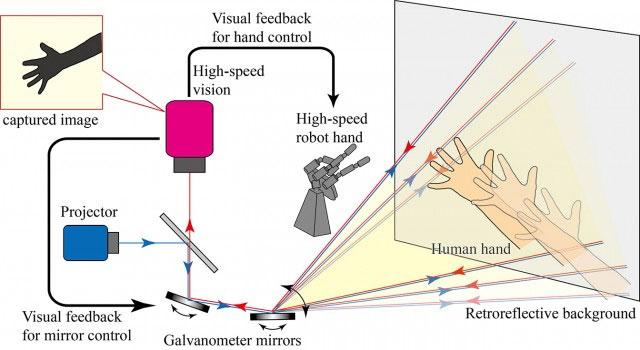 In all wining strategies, the robot always waits to identify the move that the human will make before deciding its own. The worst strategy takes the robot 0.02 seconds after the human player makes its move; the best strategy is almost instantaneous.

The RPS robot is a proof of concept for a robot that is able to respond to human movement in real-time. This ability has implications for a number of uses, including military and industrial exoskeletons that are able to identify and respond to movements more quickly. The team still has challenges to overcome; the system right now needs a specific set of conditions to perform optimally and is very expensive.