It’s unavoidable that, for the foreseeable future, the Samsung Galaxy Note 7 will remain the butt of jokes when it comes to literally hot electronics. After all, heat and electronics don’t make for a good combination. Heat and organics, however, is important, from sustaining life to making sense of the world around us. Roboticists from Georgia Tech are trying to take advantage of the latter to give robots the ability to better identify objects. And they are doing so by giving these robots a “warm skin”.

As warm-blooded animals, we humans produce heat to keep our bodies within operating condition. But that body heat also has another purpose. It helps us identify objects, or at least what an object is made of. When we touch something, we don’t feel the exact temperature of the object but a combination of the difference between our temperature and the object’s temperature plus how fast said object can “suck up” our own body heat. For example, metal will feel colder to touch than, say, wool, despite having the same temperature, because metal conducts and takes away our body heat faster than wool.

Robot equipped with touch sensors usually simply employ force detectors, which are only useful in determining how hard or soft a material is. But identifying them based on that category only is terribly inaccurate. Researchers Joshua Wade, Tapomayukh Bhattacharjee, and Professor Charlie Kemp from Georgia Tech add another type of sensor in the form of a skin that has active heating. The skin itself is made of resistive and conductive fabrics and passive and active thermistors (“thermal resistors”). 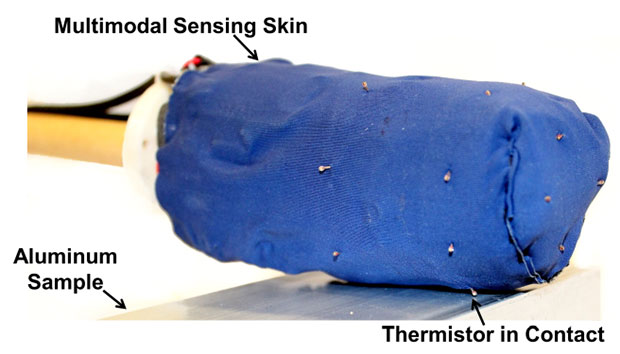 The combination of force sensors and active thermal sensors proved to be quite potent. The researchers reported that the robot was able to distinguish wood from aluminum 96% of the time when it pressed on both materials. The success rate was lower, at 84%, when only sliding on its surface. It’s not perfect, but it’s substantially higher than without the thermal sensor.

Although it doesn’t look much, the skin is still larger than a similar implementation made by a company named BioTac. The latter was only able to produce an active thermal sensor the size of a fingertip, while Georgia Tech’s prototype can wrap around a whole arm.