Road to Racer: Inside one team’s big Mercedes-AMG GT4 ambitions

Nobody ever said building a winning race car was going to be easy, but the challenge is even more complex when you’re trying to compete in GT4. With the rules changed to encourage more manufacturer participation from 2017’s season onward, teams now have a huge amount of choice when it comes to factory-produced GT4-spec machinery, but that’s only the start of it. I spoke to Indy Dontje and Damien Faulkner from Winward/HTP Motorsport, about their brand new Mercedes AMG GT4 race cars and how this new age of GT4 racing has changed the scene.

Dontje was instrumental in the development of the car for the team. While nothing major can be changed from the factory, as per GT4 requirements, the highly adjustable ABS and the optimized AMG traction control systems are based on the Mercedes-AMG GT3. What happens in the pits isn’t the end either, however. The drivers can help influence the braking, traction control configurations, suspension, and aero adjustments while they’re out in the field. 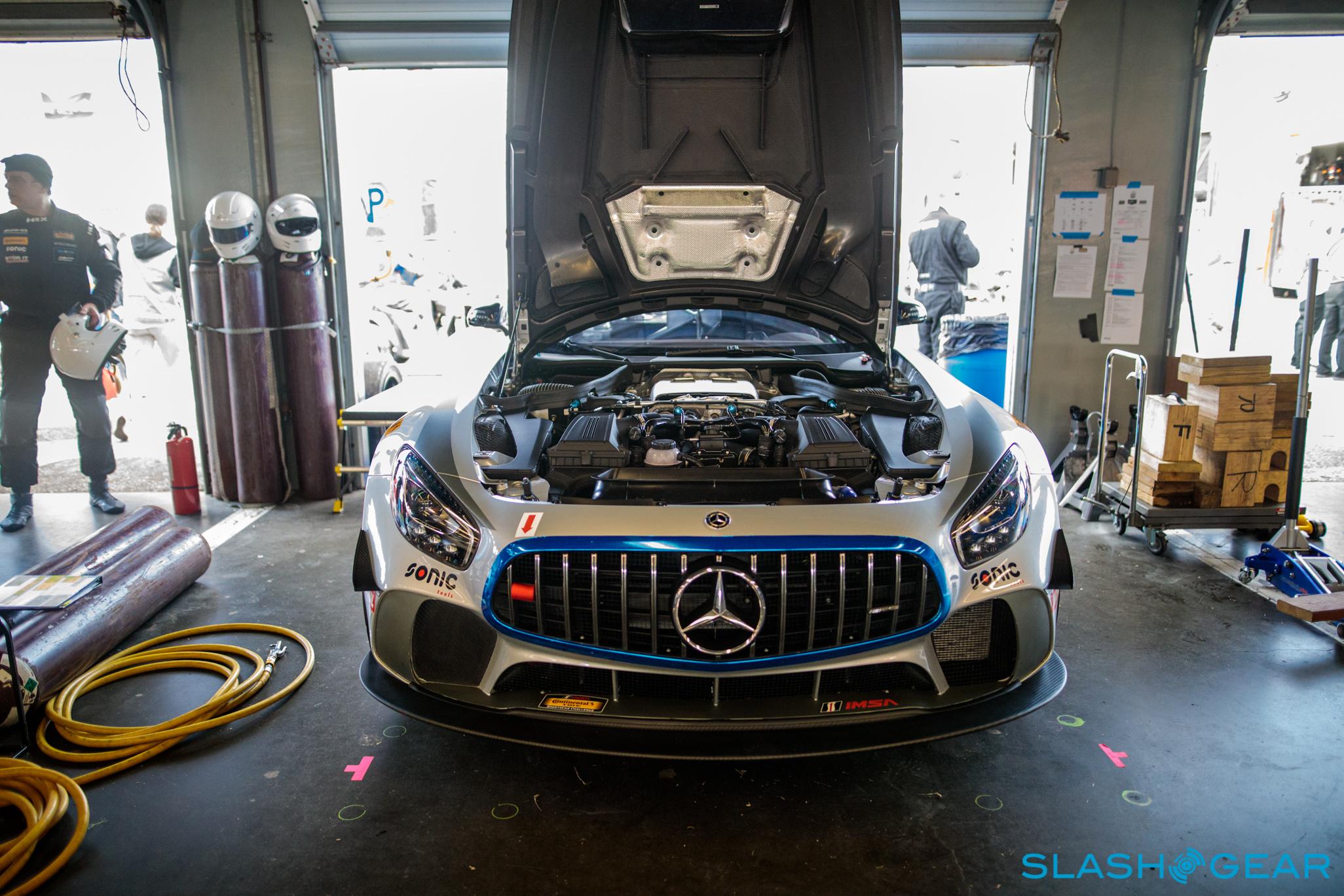 The new Mercedes-AMG GT4 is based on the already exceptional Mercedes-AMG GT. This GT4 was entirely designed to be a customer racing car, allowing teams without a considerable factory budget to be able to succeed in running their racing program. As a result, for around 200,000 Euros ($246k) the AMG GT4 is the culmination of a close-to-production design and Mercedes-AMG motorsport technology. Indeed, no small amount of work goes into making them extraordinarily durable and easy for the teams to maintain, down to the polycarbonate glass and the ultra-lightweight body panels that make up the hood, fenders, and front apron, which are made of carbon fiber-reinforced plastic.

Mercedes delivers the car with a great baseline to start with, and from there the team’s development drivers play a crucial role in the decision making process, Dontje and Faulkner explained. Mercedes presented IMSA with several baseline engine mapping options and let them decide what would be best. The teams then pick their own suspension setups, along with ABS and traction control settings. The GT4 is powered by an off-the-shelf Mercedes-AMG direct-injected biturbo 4.0-liter V8 engine that’s very close to the road going GT, too. The tried-and-tested production technology of the front mid-engine is well suited for extremely long running times, and promises more than sufficient performance with plenty of power reserved for the future. 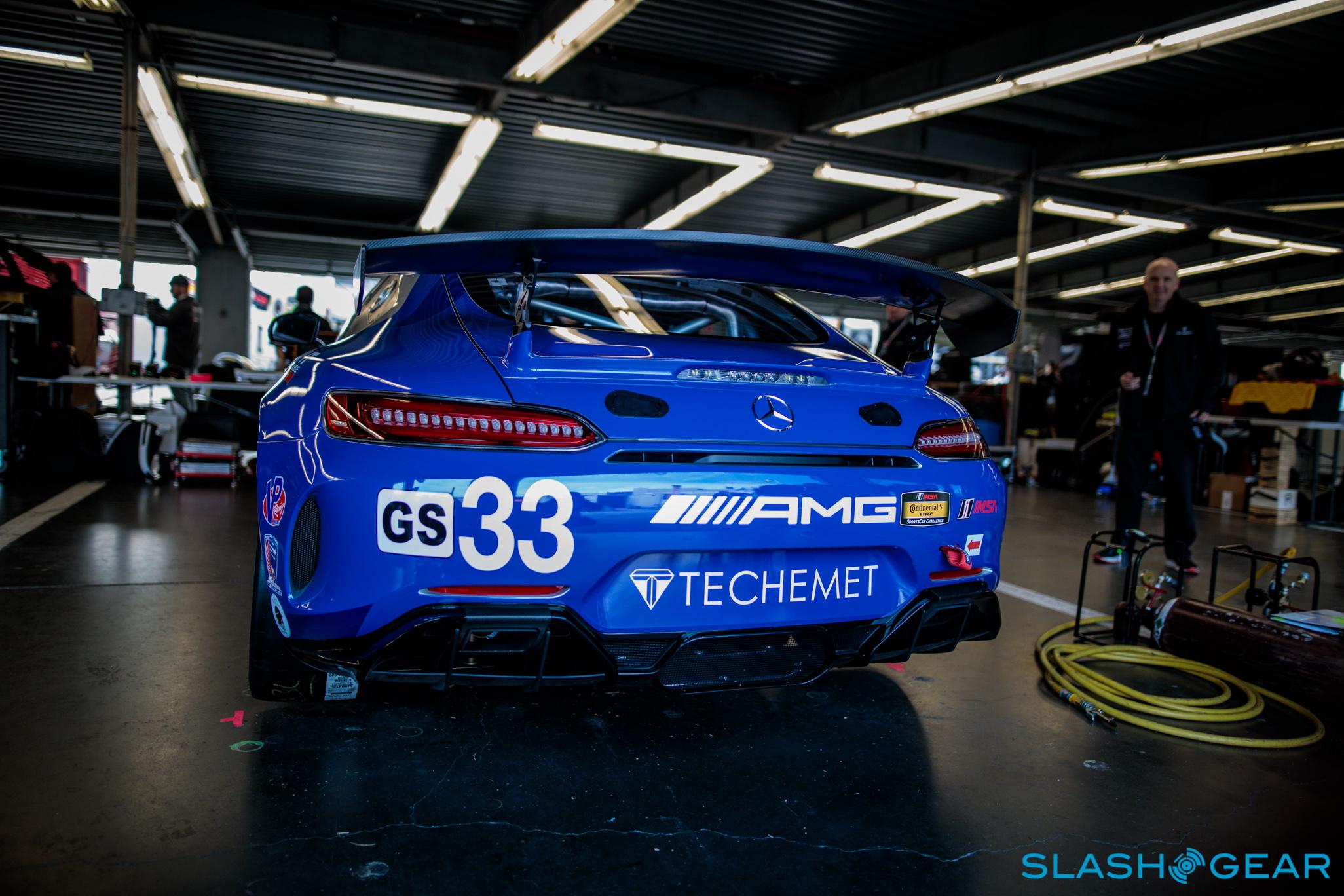 As in the Mercedes-AMG GT3, the pneumatically operated sequential six-speed competition gearbox in the Mercedes-AMG GT4 is linked to the rear axle in transaxle configuration. That means the gearbox and rear differential are located in the same housing, and allows for the best possible weight distribution and a lower center of gravity. The GT4 has a brake bias and a differential that is adjustable from the cockpit, Faulkner explained to me, and the team’s drivers aren’t afraid to be hands-on with them. Indeed, both drivers told me that, after each test, the debrief is instrumental in shaping how the engineer decides how to solve any issues the driver may have discovered. Mercedes is also present in the background, to weigh in with any improvements it can offer.

Arguably what makes GT4 so engaging is the knowledge that driving skill comes down to more than just quick reactions. During the race many parameters of the car can be adjusted from the steering wheel, Dontje explained, as well as from switches and dials that are specifically placed to be within arms’ reach. While up to 510 horsepower through the rear wheels might sound intimidating on racing slicks, Dontje showed me how the car is, in fact, perfect for all levels of driver. 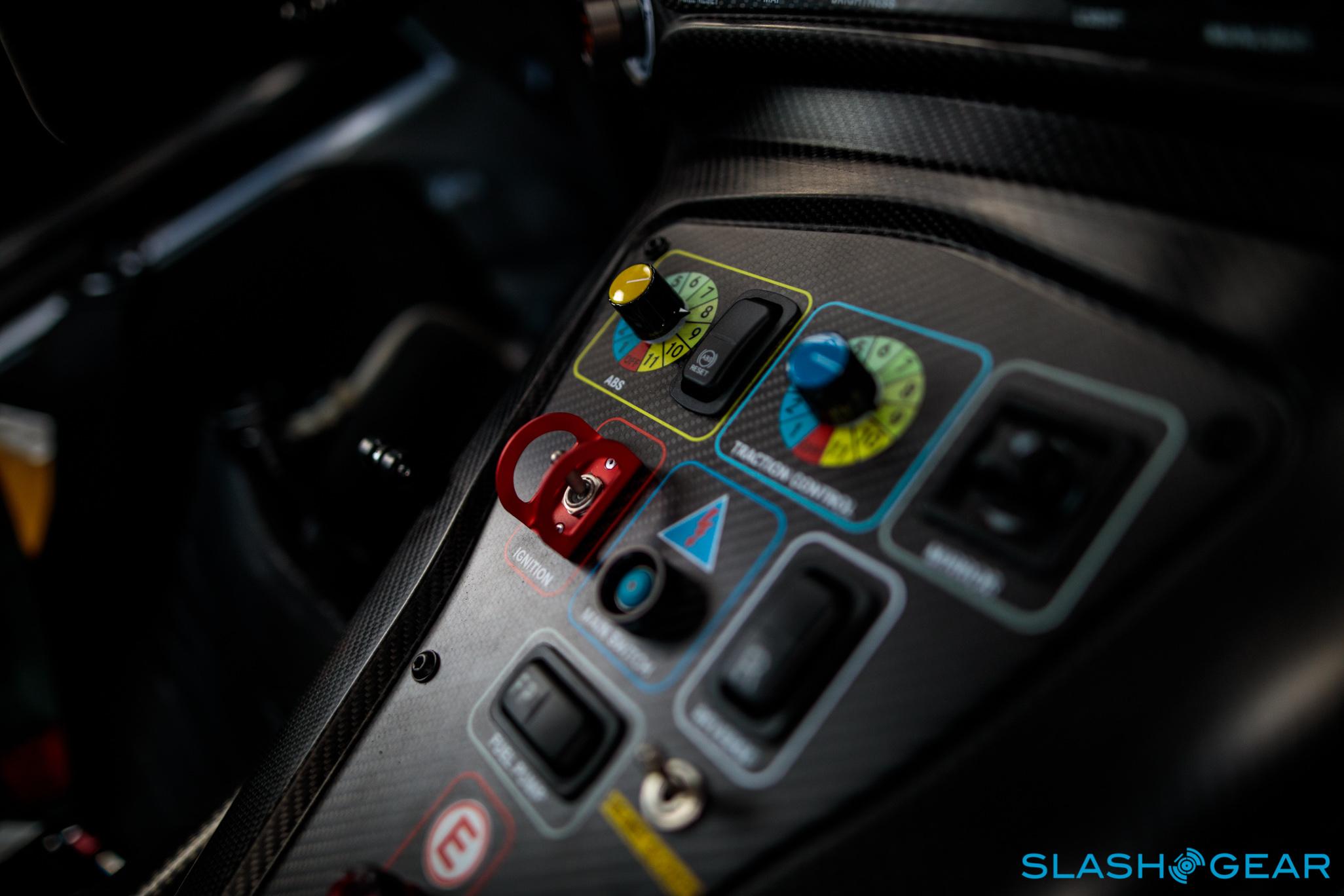 Both the traction control and ABS have a range from 1-11, for instance, in addition to the ability to turn them off completely. Dontje, for example, prefers to drive with some of the systems off, while other drivers prefer some level of intervention. These systems help drivers that are new to the car and also potentially new to a track to learn both, without needlessly risking vehicle or occupant. All the same, while the aid systems are there, they’re still just tools and not a crutch. These drivers still need vital skills to be able to survive out on the track.

Speaking of track survival skills, the Texas-based Winward Racing team of Russell & Bryce Ward honed their talents while competing in the infamous 24 Hours of Lemons series. They built and competed in a Back to the Future themed Nissan 300ZX but, after learning many valuable lessons and completing in a number of successful seasons of Lemons racing, the father and son duo decided to move up the ranks. 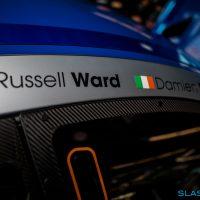 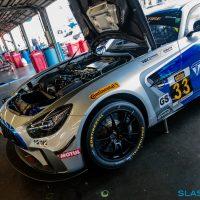 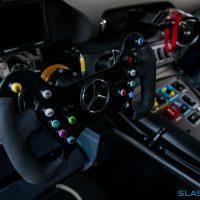 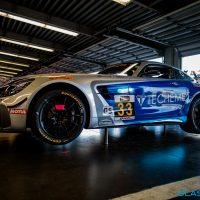 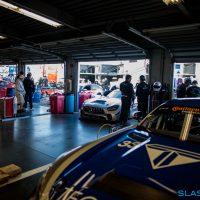 That ended up in a partnership with Damien Faulkner, who coached them on the fine art of GT3 racing. Faulkner and Ward would eventually team up in a Cayman GT4 owned by CJ Wilson Racing, and together they put the car on the Daytona podium in Ward’s sixth pro race in the Continental Tire Sports Car Challenge (CTSCC). Faulkner went on to connect Winward and HTP Motorsports, who entered the CTSCC with two Mercedes-AMG GT4s for the lead-up race to the Rolex 24.

For all the time you spend perfecting your car, there’s no accounting for what can happen out on the competition asphalt. Russell and Damien’s race in the #33 AMG GT4 would come to an end early when their car got caught up in an accident in turn 1 and forced them to retire. The #57 AMG GT4, however, had an incredible race. Bryce Ward had no issues lap after lap, giving the team owner plenty of time to get to grips with the potent AMG GT4. After 66 laps he would hand the car over to Indy Dontje, and thanks to a full course yellow Dontje was able to put the AMG GT4 on the tail of the lead lap with just over an hour to go. 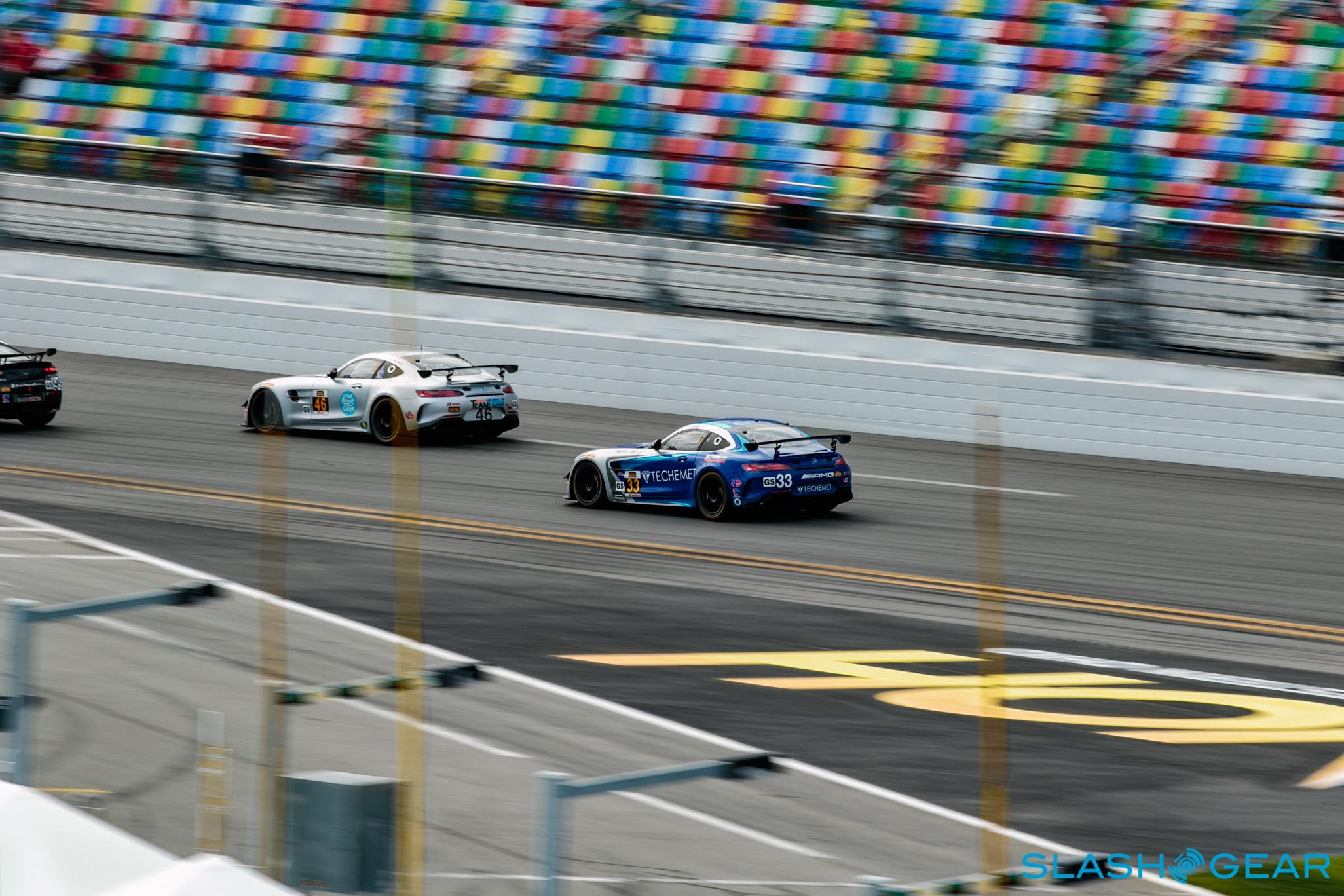 Dontje would briefly lead the race before the final pit stop, indeed. The car was set up so perfectly that no tire changes were required, a splash of fuel all that was necessary to finish up the race. Dontje would rejoin the field in sixth place and, after a brilliant drive, moved the car into a fifth-place finish and the top Mercedes spot in the GS class.