Review: YOGA Tab 3 Pro — it’s all about the projector

Everyone has a first: the first smartphone they owned, the first tablet they used, the first virtual reality headset they put on. For many, select Lenovo tablets will be the first tablet they’ve used that features an integrated projector, enabling it to beam its own screen onto the nearest wall for an anywhere-you-need-it grande display. The YOGA Tab 3 Pro is Lenovo’s latest projector-toting tablet, and we recently gave it a spin to see how it fares in everyday life. Is the tablet a must-have tool for pros, or a mere novelty? Read our full review to find out!

There are many things to like about the YOGA Tab 3 Pro, and first among that is the design. Unlike most tablets, which are flat, Lenovo’s projector-toting slate has a large round hinge that serves as both a kickstand and a handle. When holding the slate, the hinge is a solid place to grip; when on the table, the hinge can be adjusted to just about any angle. The hinge’s kickstand portion snaps into place when folded all the way back, and is released by pressing a large button in the middle. 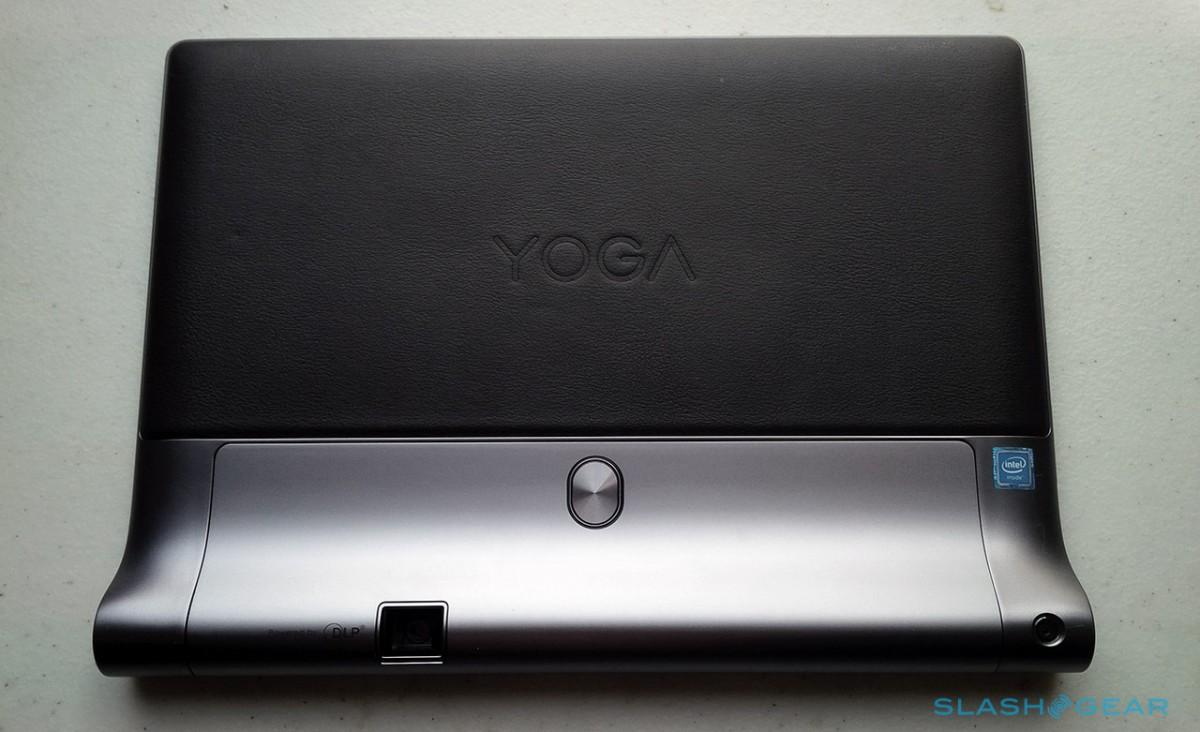 A button resides on each end of the hinge — one turns the tablet on, and the other controls the projector. Sandwiched between the display and hinge is the speaker grille, which conceals the multi-speaker sound bar. There are a total of four JBL speakers paired with Dolby ATMOS technology — all things considered (that is to say, in comparison to other tablets), the audio is very good, and can be turned up to a very high volume. 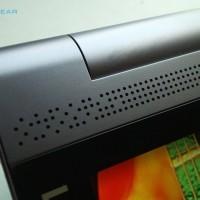 On the flip side you’ll find a beautiful 10.1-inch QHD 2560 x 1600 Smart Display panel. The display is very bright and crisp, and would work well for photographers, designers, and similar users. The YOGA Tab 3 Pro also features Lenovo’s AnyPen tech, which allow any conductive object — say, a fork — to function as a stylus. As well, the tablet is durable with an IP21 rating, enabling it to withstand splashes of liquid. 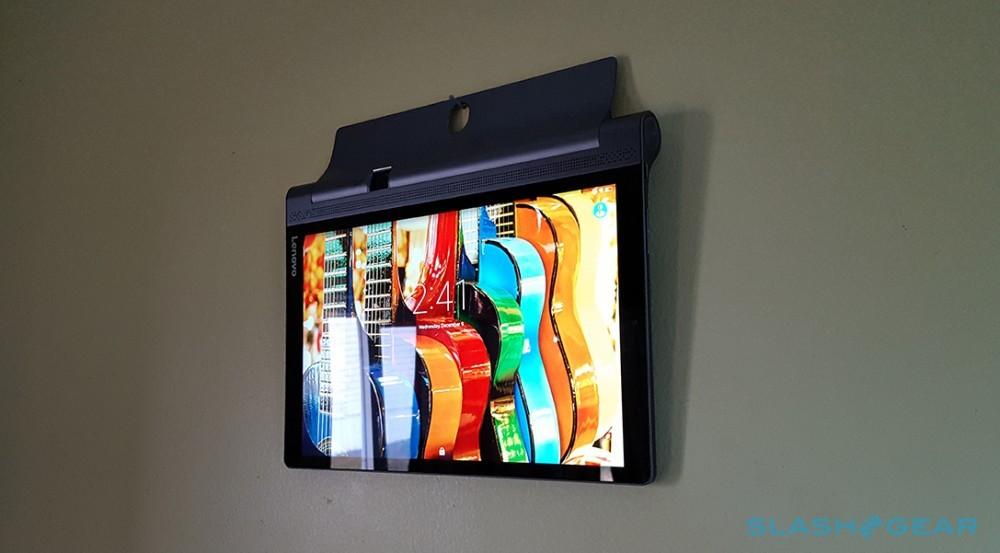 Under the hood lies an Intel Atom x5-Z8500 2.24GHz processor, 16GB of storage (plus a micro SD card slot), and 2GB of RAM. Connectivity includes Bluetooth 4.0, 802.11ac, and micro USB. There’s a 13MP camera on the rear with auto-focus and a 5MP camera on the front. The battery is substantial at 10,200mAh and is paired with a 2A fast charger to cut down on charging time.

The YOGA Tab 3 Pro features “near-stock” Android 5.0 with Google’s Material Design in mind. It is pleasant to use and easy on the eyes, and most importantly is without the bloat common on many tablets. There’s the App Drawer, and the only third-party apps are Lenovo’s more “functional” offerings. We didn’t encounter any issues when using the tablet; it ran quickly and smoothly, and left nothing to be desired.

Battery life in particular is to be applauded. When left in standby, the tablet will retain its charge for many, many days. During use, the tablet runs for hours on end. Even with the projector running, we watched a movie and TV episode, and still had considerable charge remaining. As you can see from this battery consumption chart, the tablet has been in standby for weeks after running for four hours, and it still has nearly half its charge remaining. To say that’s great is an understatement. 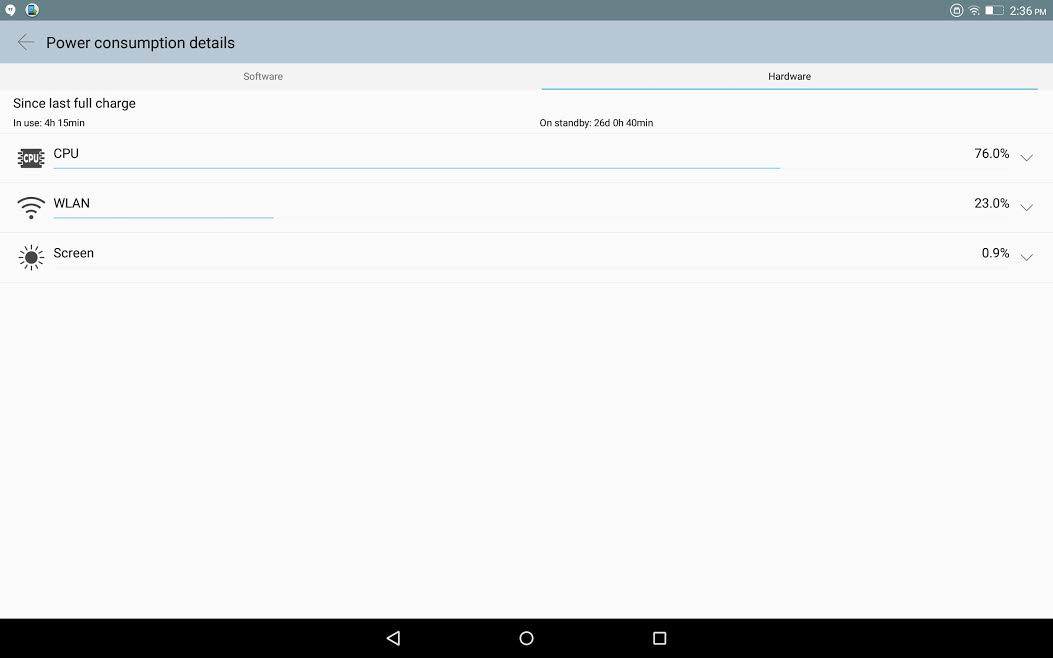 The tablet’s big selling point is the projector — without it, the tablet becomes more of a stylish novelty rather than a serious and exciting tool that stands out among its competitors. This particular model has a brighter DLP projector than Lenovo’s past models, and it can be rotated 180-degrees thanks to the unique (and quite stable) hinge. If you can’t find a decent enough surface upon which to place the tablet, there’s also a hole in the hinged portion that can be used to hang the tablet from a nail or hook on the wall…just like a picture frame. 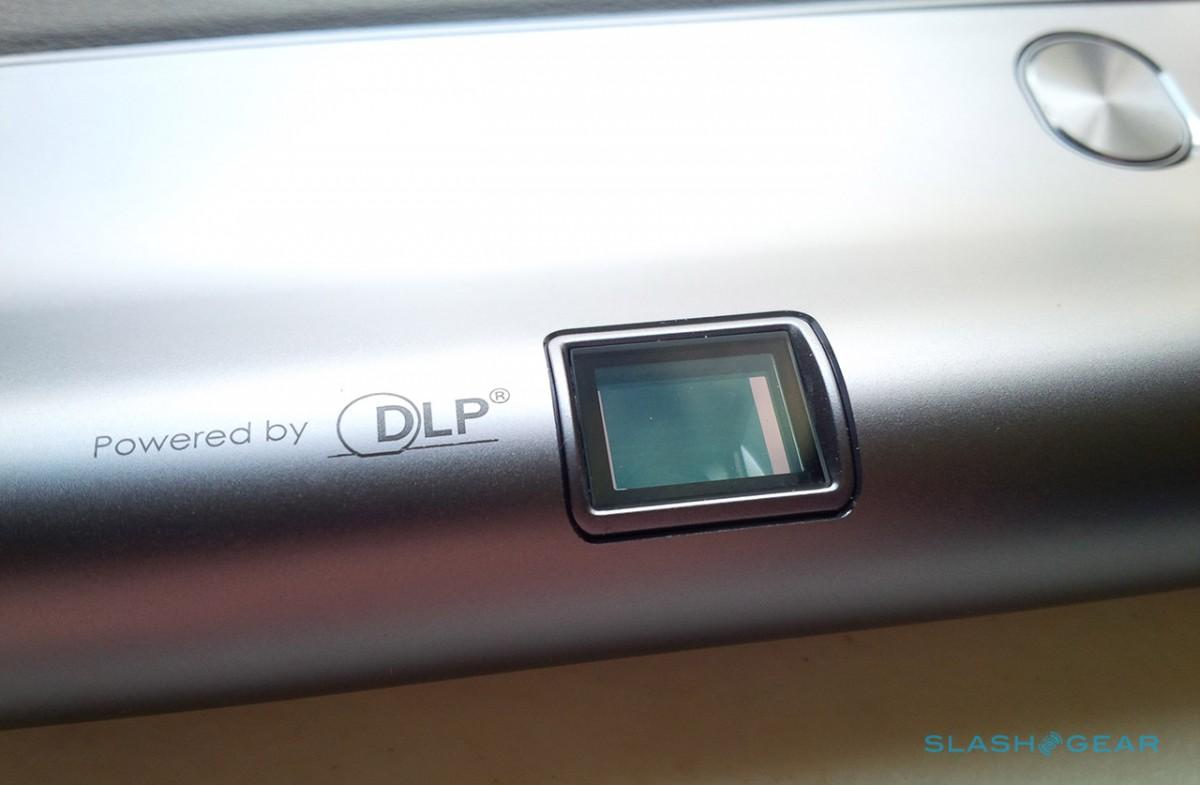 The projector, as you likely suspect, doesn’t have a very high brightness rating at 50 lumen. That doesn’t mean it is excessively dim, though your estimation of it will probably depend on your past experiences with larger projectors. Lenovo says the projector can produce images up to 70-inches, which is true, though of course you can go bigger than that — the image will become fuzzier and dimmer, though (not to mention you’d have to get the tablet many feet away from your projection panel or wall).

Because the projector is only 50 lumen, you’ll need your room to be as dark as possible for anything larger than about a 12-inch projection — and even then, the darker the better. That said, 50 lumen probably isn’t as dim as you’re imagining; I did watch a movie using the projector in the late evening when the room was still notable lit, and while the projection was washed out, it was still watchable. 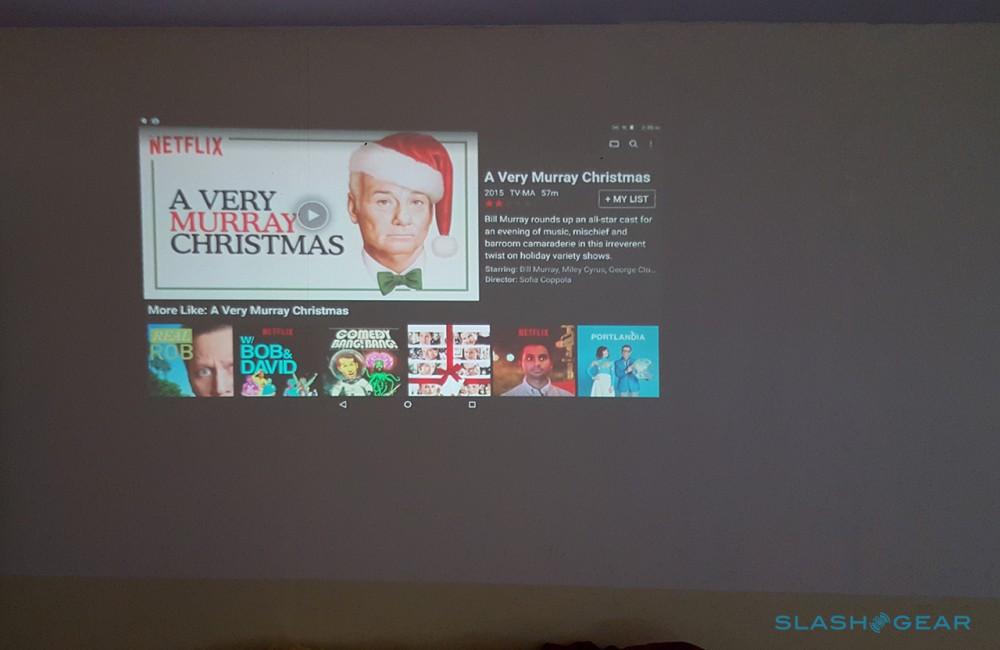 Note: this picture was taken at about 3PM on an overcast day. The curtains were only partly closed. As you can see, the darkest parts of the picture are washed out, but the brighter parts are very visible. The projected image is about 3ft across.

The real fun started, though, when the tablet was positioned so that it projected a 6ft+ image onto a white angled vault ceiling. We dimmed the lights completely and laid on the floor watching various movies and TV shows with the aid of a Bluetooth speaker. Was it top-of-the-line projection quality? No. Did it matter? No. It was fun, and the picture produced by the tiny projector far eclipsed the quality I expected. If you’re considering the tablet because you like the idea of watching movies on the ‘big screen’ without toting around a projector, you’ll probably love the tablet, too. 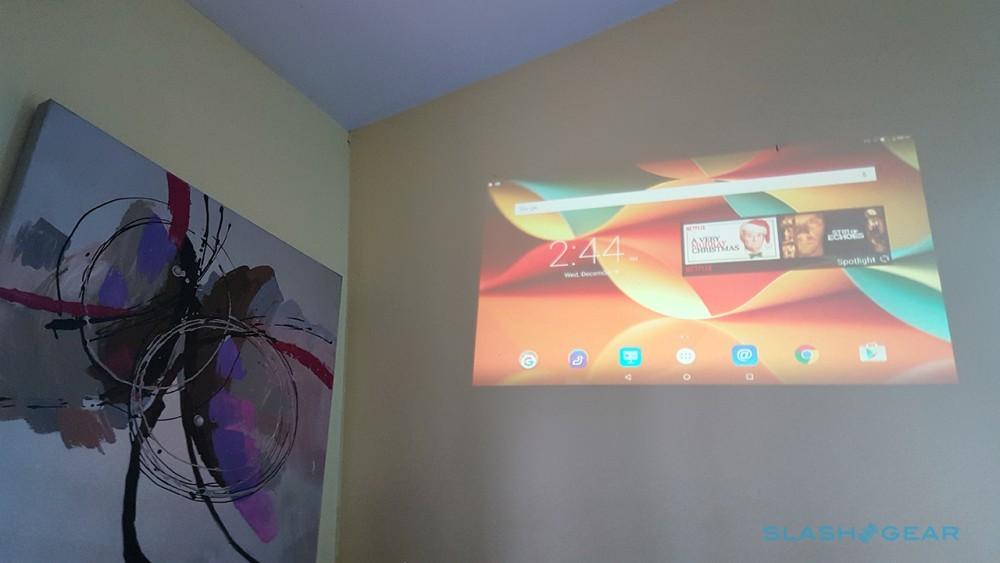 Note: This image was taken during an overcast day in the mid-afternoon. The curtains were fully opened. The image, while washed out, is still quite visible.

With that said, the projector would be less useful if you’re thinking about using it to get work done — that’s largely because, again, the best quality comes with the lowest light, and so if the room is bright (a daytime office, let’s say), you’re not going to see much.

As far as the finer details go, the tablet itself has projector settings available in Android’s “Settings” menu as well as the drop-down shortcut menu. For focusing, one is presented with a virtual dial on the display that is adjusted using a finger. You’ll have to adjust the focus depending on how close or far you have the tablet positioned from the projection screen or wall.

There’s also a calibration tool for calibrating the projector. With angles, the tablet automatically adjusts the projection angle to produce as square of a display as possible based on the angle of the projection surface. If you’re shining it on an angled vault ceiling like we did, for example, the tablet will adjust the picture after a few seconds so that it still appears flat and square.

The YOGA Tab 3 Pro is, first and foremost, a beautiful tablet. Whether you get much use out of the projector doesn’t matter much when looking at the product as a whole. The display is beautiful, and the hinge is an equal mixture of unique and functional. Add to this the leather back, front-facing speakers, durable construction, built-in projector, and more…well, to put it lightly, the tablet does everything a tablet should and more.

Of course, the projector is a big part of the tablet and unless you’re very picky or expecting more than you should, you’ll be very satisfied with it. Being able to fire up a movie on the ‘big screen’ for impromptu movie nights was unexpectedly fun, and despite the projector’s small size, it held its own well. 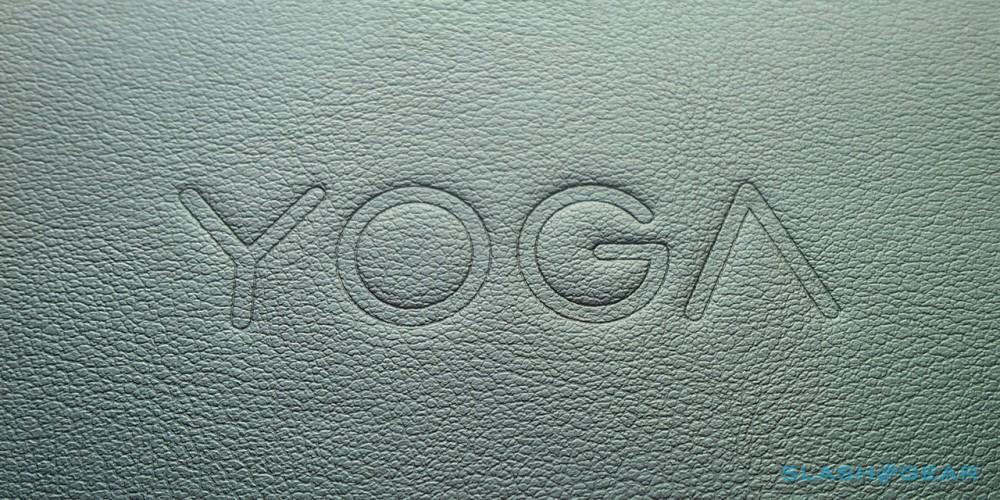